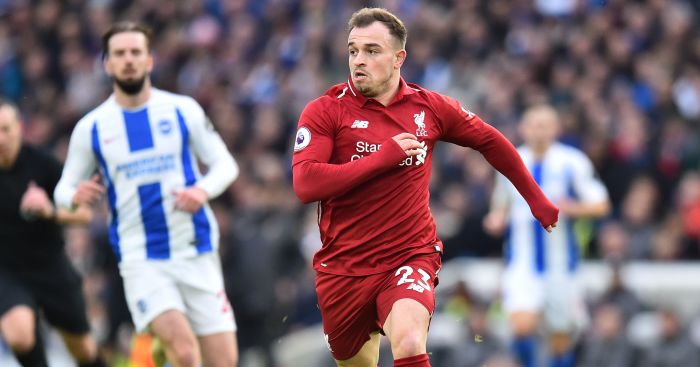 Xherdan Shaqiri has named more Bayern Munich players in his dream XI than Liverpool players as the two clubs prepare to clash on Tuesday night.

Bayern will travel to Anfield for the first leg of their Champions League last-16 tie tonight with Shaqiri facing his former club for the first time since he left in 2015.

The 27-year-old won two Bundesliga titles during his time at the Allianz Arena before playing for Inter Milan and Stoke City.

Ahead of the fixture, Shaqiri was asked to name his dream XI from players all over the world by German TV show Sport1.

Unsurprisingly, the Swiss international opted for a couple of Liverpool players in his line-up with Andy Robertson and Virgil van Dijk making his team.

The Reds will be without Van Dijk when the German champions come to town on Tuesday and Shaqiri admits he will be a big miss.

“He is a very strong defender who’s having a great season and who has made us better and more stable at the back,” Shaqiri told Sport1.

“We will miss him. But this is also a great opportunity for other players to impose themselves and show they have the quality to survive in big games.”

Three Bayern Munich players helped make up the rest of Shaqiri’s XI with Manuel Neuer, Thiago and Robert Lewandowski named on his teamsheet.

Here’s Shaqiri’s dream side in full: