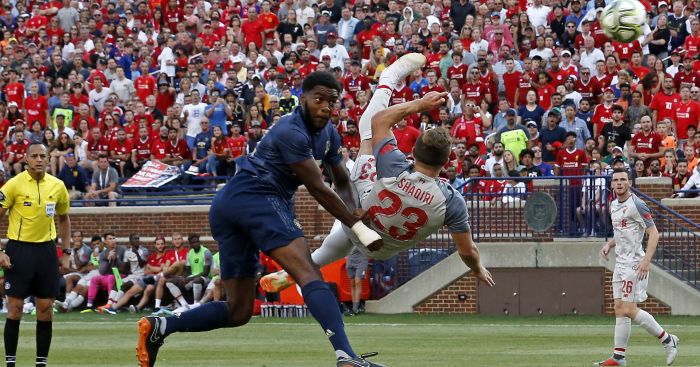 Shaqiri, who played alongside Adam for Stoke last season as they were relegated from the Premier League, joined Liverpool this summer and marked his debut by scoring a superb overhead kick in a 4-1 pre-season victory over Manchester United.

Adam described Shaqiri as a “top player”, who deserved to be at a club of Liverpool’s stature, but questioned his commitment at crucial times in Stoke’s relegation fight.

“He’s a big player, at times he did well for us,” Adam said on the BBC Sport website.

“But in critical situations, I felt tracking back and what we needed for the team in a relegation battle just wasn’t there.

“He has got it in him, but he probably knew we were going to get relegated, he was going to the World Cup and had this big move – this move was probably done three, four months ago.

“He is a match-winner, but at times it was difficult to play in the same team. The manager would let him get away with certain things.”

Adam said Shaqiri could soon start to grow impatient if he struggled to hold down a first-team place.

“He might get frustrated at not playing as much as he wants – it’s how long he waits and what (manager Jurgen) Klopp does with him,” the Scot added.