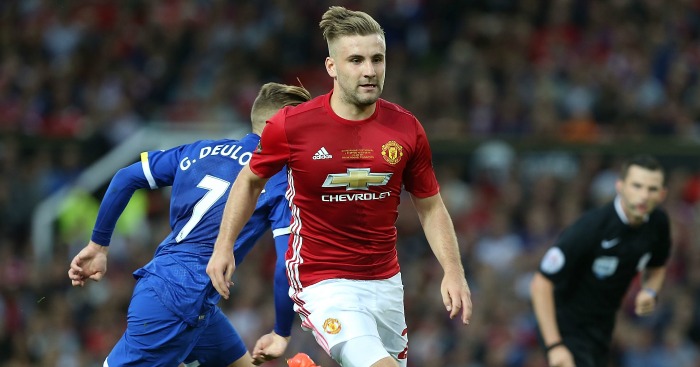 Luke Shaw (Manchester United)
When Jose Mourinho was announced as Manchester United’s new manager, Shaw would have been forgiven for gulping slightly. After all, this was a man who publicly said that the youngster’s wage demands would have “killed” Chelsea’s financial stability.

Shaw need not have worried. Such is the potential in the left-back, Mourinho could never be anything other than damn excited to work with a defender who is likely to be an England mainstay for the next decade. Shaw’s pre-season performances have told us exactly what we already knew: The boy will be a star.

Given the horrific double leg break Shaw suffered against PSV Eindhoven last season, there should be patience afforded in his 2016/17 form. Not only does a young player have to get physically ready for the demands of the Premier League, but also overcome the psychological impact of his injuries. Every 50/50 tackle brings back inescapable memories, and thoughts of what could be again.

Yet with Shaw there is reason to believe he has conquered these demons. “I don’t know really how to describe it, it was a really tough last eight or nine months until I got out on the training pitch and ever since then I haven’t looked back,” he said last month. “From now on I’m just going to look forward and carry on doing what I did last year from the start.” That makes us feel all warm inside.

Danny Ings (Liverpool)
Ings had scored three goals in his seven Liverpool games when, in training on October 15, 2015, he ruptured his anterior cruciate ligaments. Seven days after Jurgen Klopp had taken over from Brendan Rodgers, Ings had lost the chance to impress the new manager.

It would be easy to think that Ings’ time to impress at Anfield has already gone. So much has changed in the last ten months, in both personnel and managerial style, that he is in danger of becoming a victim of circumstance.

Still, there is a flipside to that negativity. Ings has only just turned 24, has now fully recovered from his injury and will likely wave a fond farewell to Mario Balotelli and Christian Benteke this month. That would leave nobody with quite the same skillset as Ings at Anfield, and therefore make him a useful commodity to keep around.

Ings also spoke last month of how he had studied Klopp’s tactics during his lay-off in order to shape his game and impress Liverpool’s manager. Clever boy.

“Danny, with his qualities, will score goals in the future,” Klopp said after Ings scored the winner against Tranmere in pre-season. “It’s a special day today, but there will be more. After this year, he should not put too much pressure on himself. He should enjoy the game and enjoy getting fit. He knows that, and we will work together with him to do that.”

Eden Hazard (Chelsea)
The ‘new signing’ cliche is typically reserved for those recovering from serious injury, but there can be few players looking forward to a fresh start more than Hazard. Having so evidently fallen out with Jose Mourinho and been named on a Stamford Bridge banner as one of the ‘Chelsea rats’, Hazard must be delighted to see Antonio Conte roll into town.

In fact, Hazard may be given his wish to play in a more central role for Chelsea this season behind a frontline striker.

“I like him in this position,” said Conte. “Like a forward. It can be a good solution for us. He can play as a winger – but also he can play as the second forward. He must improve his shape but he is working hard and his shape can improve a lot, the same as the other players.”

What price 2014/15’s PFA Player of the Year and last season’s biggest disappointment completing the cycle in 2016/17?

Fabian Delph (Manchester City)
I accept that I have work to do with this one. You think that Delph is, if not quite a snake, a player who was happy to take Manchester City’s coin in return for not playing much football. Delph’s first season in Manchester was hardly a roaring success: he started eight league games, was on the bench for 11 more and sustained muscle injuries far too regularly to ever settle in.

Yet with a new manager comes a new start, and Delph was busy singing the praises of Pep Guardiola’s effect on his own game even before being named Man of the Match against Borussia Dortmund last week: “I’d say I’ve learnt more in these three weeks than I have throughout my whole career. It’s been amazing for me and I’m really looking forward to the rest of the season.”

City’s own website purred after Delph’s performance against Dortmund: ‘Delph’s “grass-eating” pitch coverage, even in stifling heat, was no surprise to anyone but it appeared as though he had been given an increased creative license and more access to the final third of the pitch where, on a number of occasions, he showed his quality.’

An unlikely hero of a new era?

Callum Wilson (Bournemouth)
To understand the impact that Callum Wilson’s absence had on Bournemouth’s 2015/16 season, remember that only Josh King scored more league goals than him. Wilson scored his last one on September 19.

Now back after a cruciate ligament injury that also befell Max Gradel and Tyrone Mings, Wilson will be looking to re-discover the scoring form from early last season that led to calls for him to be given an opportunity at international level. He signed a new four-year contract in July after interest from West Ham and Tottenham.

“Callum has constantly improved during his time here and only his injury stopped him from having a big impact in the Premier League last year,” Bournemouth’s chief executive Neill Blake said upon announcing the new deal. We’re about to find out how right Blake is.

Kevin Mirallas (Everton)
Oh to be a fly on the wall when Mirallas found out Roberto Martinez had been named as the replacement to Marc Wilmots as Belgium manager. It is no secret that winger and manager did not see eye to eye during the final months of Martinez’s reign at Everton.

In May 2015, Mirallas accused his manager of breaking promises over his future: “Borussia Dortmund and Atletico Madrid were interested, but Everton obliged me to stay at the club. So I had to stay, but in the second half I was suddenly playing less games. There are promises broken and yet it makes for a somewhat awkward relationship with the coach. Soon I will have a conversation with him.”

Fifteen months later, and Atletico Madrid interest couldn’t be further away. Mirallas was benched 23 times in the Premier League last season, and completed 90 minutes on just six occasions. Not all of that was Martinez’s fault by any means, but Mirallas will be confident of impressing Ronald Koeman and getting a career back on track. He’s even been taking free-kick tips off his new manager.