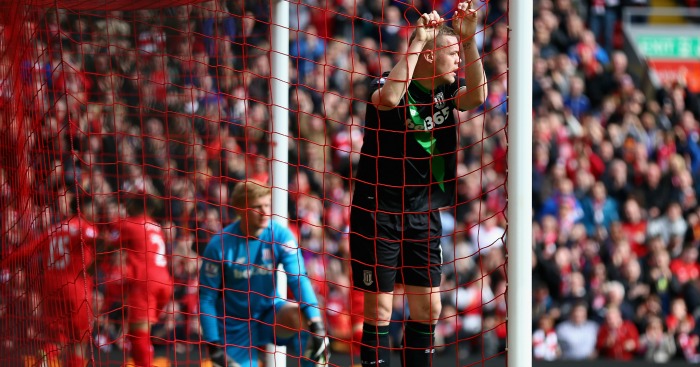 Danish youngster Jakob Haugaard has conceded six goals in two games since taking over from Butland following the leg fracture he suffered on England duty.

Haugaard was not directly at fault for any of the four goals Liverpool scored in Sunday’s 4-1 victory over Stoke at Anfield but the visitors certainly did not look solid as a defensive unit.

Daniel Sturridge and Divock Origi both scored free headers while Alberto Moreno and Origi were allowed too much time and space as their shots flew beyond Haugaard.

The 23-year-old joined the club from FC Midtjylland last summer and only made his Premier League debut in last weekend’s 2-2 draw with Swansea, but Shawcross believes the Dane has already shown he is a capable deputy for first-choice Butland.

When asked if Stoke were missing Butland, Shawcross said: “No. Jak’s put in some good performances.

“The last six goals I don’t think he’s got anywhere near because they’ve all been good finishes. We’ve got a top-class keeper and I’m sure he’ll continue to do well.”

It was the first time Stoke have conceded four goals this season and, asked for his explanation, Shawcross said: “Lack of concentration, lads not switching on. It’s just simple things.

“You have a man to mark and you have to stick with them. Things happen in games but these are things you can usually stop. We’re usually okay at it so hopefully we can improve for next week.

“The last six, two against Swansea then the four here, are all disappointing goals and goals that usually you’d defend better.

“At the start we played some good football and in the first half we were probably the better team but we conceded two sloppy goals and in the second half Liverpool sort of rolled over us.”

Butland’s injury is just the latest to affect Stoke’s backline. Shawcross was making his return after a month out with a back problem.

It has been a stop-start season for the captain, who has managed just 18 appearances during the campaign.

He said: “Personally it’s been a frustrating season. I can’t stay fit for too long. It’s nice to get back and hopefully I can stay back for a while.”

The result lifted Liverpool above Stoke into eighth place in the Premier League table and with games in hand on those around them.

Stoke trail sixth-placed West Ham by five points but Shawcross insists their European hopes are not over yet, with title challengers Tottenham their next opponents next Monday.

The defender said: “We go away, we sulk for a couple of days. Because the next game’s not until Monday it’s hard to get over.

“We’ve got five games left, there’s 15 points there so hopefully we can take all of them. That’s our aim, and we’ll see how high we finish in the table.

“We’ve had a good season so far, we want to finish it well. We usually do so hopefully the manager can get us going for the next few games and we can get back on the right road.”