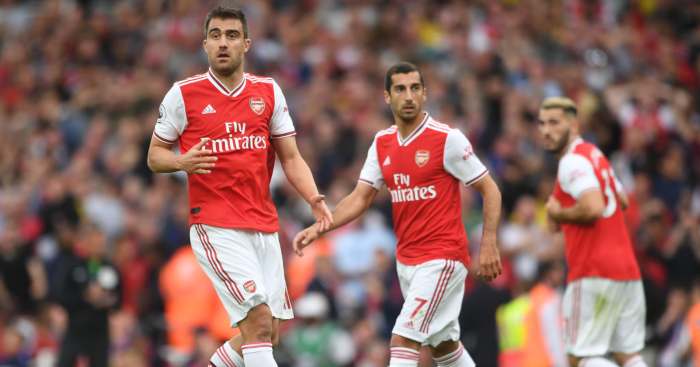 Alan Shearer thinks Arsenal’s defending is “worse now” than it was last season after they drew 2-2 at home to Tottenham in the north London derby on Sunday.

Spurs have not won a league game at the Emirates Stadium since November 2010 and were pegged back to draw 2-2 here having appeared on course to break that duck after Christian Eriksen’s 50th Premier League goal and Harry Kane’s penalty – his 10th goal in his last 10 games against Arsenal – put them in prime position to do so.

But, after mistakes from Bernd Leno and Granit Xhaka had left them vulnerable, Unai Emery‘s Gunners fought back, Alexandre Lacazette pulling one back in first-half stoppage time before Pierre-Emerick Aubameyang equalised in a frenetic second half.

“Arsenal‘s defending was comical at times in the first half – it was Sunday League stuff,” Shearer wrote in his column for The Sun.

“Sokratis didn’t need to go for the header for Christian Eriksen’s opening goal.

“Then David Luiz dived in again, gambling in the way he does all too often.

“And goalkeeper Bernd Leno should have done better than just palm the ball into Eriksen’s path.

“From start to finish, it was embarrassing how easy it was for Tottenham to get their two first-half goals.

“But what on earth is Granit Xhaka thinking when he lunges in to give away the penalty?

“There has to be a moment when he thinks ‘I have to slow down here because I’m going to wipe him out’ – but he never thinks about it at all.

“If anything, Arsenal are worse now than they were last season.”