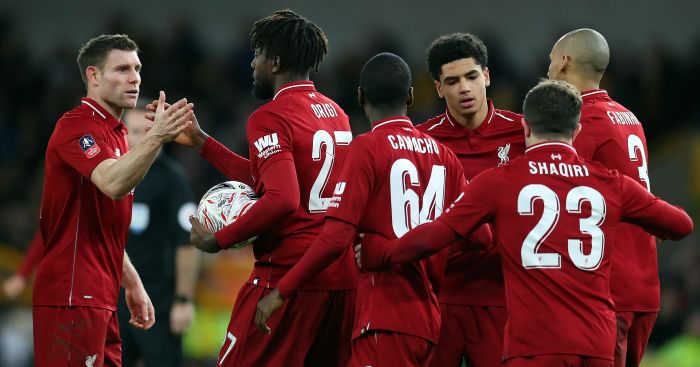 Alan Shearer has named two Liverpool players that “no one will buy” after their performances in the 2-1 loss to Wolves in the FA Cup third round.

The Reds crashed out of the FA Cup after Jurgen Klopp made nine changes to his starting line-up in a bid to keep his players fresh for an assault on the Premier League title.

Divock Origi and Daniel Sturridge struggled up front, especially in the first half, with the latter replaced by Mohamed Salah on 70 minutes.

Liverpool’s only shot on target came when Origi scored just after the interval, while Sturridge failed to muster a shot on goal.

And Shearer doesn’t think either player would be bought by other clubs if Liverpool put them on the transfer market after that display.

“They have done nothing,” Shearer told BBC’s Match of the Day programme at half-time. “Playing as individuals. No movement, flat, no energy. I can’t even see they’ve had a sweat on. They’ve offered nothing whatsoever

“[Jurgen] Klopp should be going berserk at them, in particular, at half time. If Klopp’s put them in the shop window, no one will buy them.”

On Klopp’s decision to change most of his team, Shearer added: “When you rotate as he did you’re gambling.

“He’s looking to these guys to give him a performance – they failed miserably.”