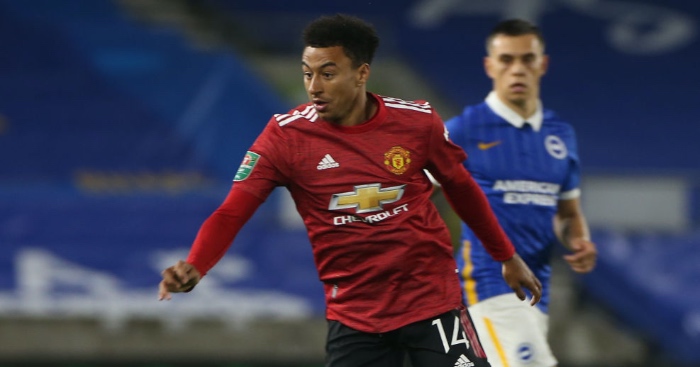 Sheff Utd have become the latest club to be linked with Man Utd outcast Jesse Lingard, according to a report.

The Englishman is deciding on his future after falling down the pecking order at Old Trafford.

He’s made just two appearances this season and is yet to play in the Premier League.

FEATURE: One per club: Players eyeing up the January sales

According to Manchester Evening News, the Blades are interested in taking Lingard on loan next month.

It’s thought that the 28-year-old will be available for a loan move with the option to buy.

United boss Ole Gunnar Solskjaer clearly doesn’t need him and has prioritised the likes of Marcus Rashford and Mason Greenwood this campaign.

Rashford scored a brace in their 3-2 victory over the Blades last night.

That’s left Lingard pondering his future. He continues to aim for a spot at next summer’s European Championships with England.

Chris Wilder’s side might need some new attacking options from January if they are to turn their situation around.

They’ve scored just seven goals so far, with two of them coming from penalties.

They’ve looked down on their luck compared to last season and haven’t been helped by individual errors.

Lingard has been linked with a host of clubs ahead of the new year. Celtic and Rangers have been touted with an interest, alongside Spanish side Real Sociedad.

Lingard isn’t the only United player that the Blades could bring in to improve their squad.

Marcos Rojo is another outcast under Solskjaer who is being linked with a switch to Bramall Lane. He was axed from the Premier League squad for this season, but a deal would depend on Sheff Utd’s ability to afford his huge wages.