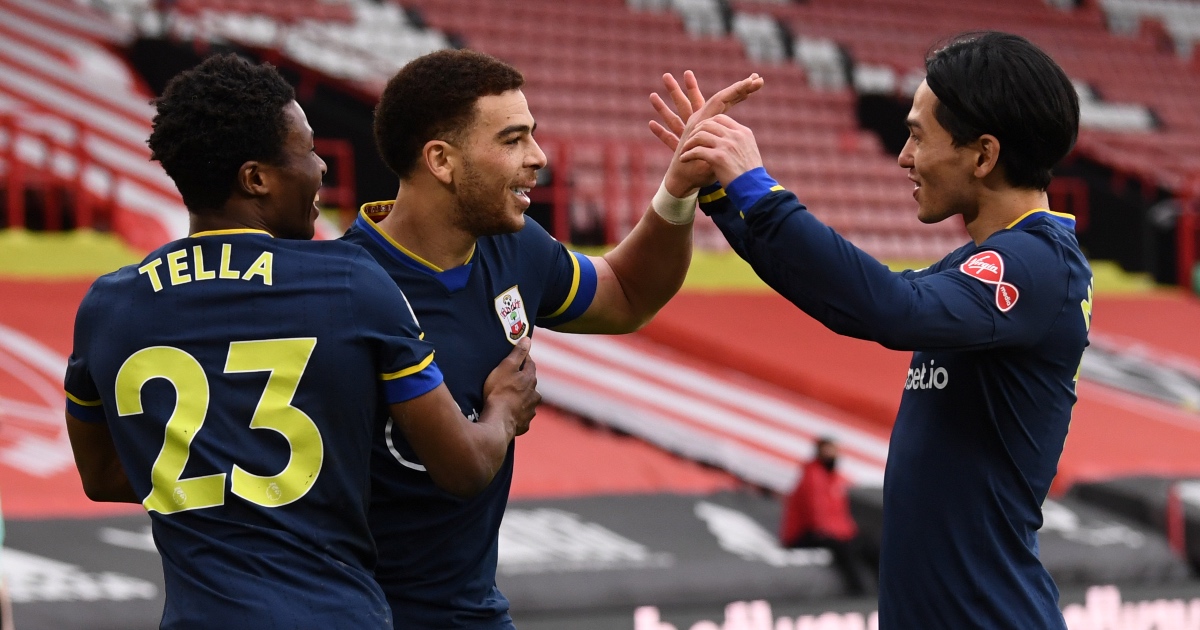 Goals from James Ward-Prowse and Che Adams gave Southampton a long-awaited and much-needed victory and plunged Sheffield United nearer to relegation from the Premier League.

A first win in 10 matches stopped Saints’ alarming slide and moved them 10 points clear of the bottom three, but the rock-bottom Blades look more unlikely by the week to pull off the greatest of escapes.

The 2-0 defeat leaves Chris Wilder’s side 12 points adrift of safety with just 10 matches remaining to save themselves.

It was an all so familiar story for the Blades – playing well, making chances, but shooting themselves in the foot at the other end with poor defending and individual mistakes.

They were given a boost after 12 minutes when Danny Ings went down injured off the ball and had to be replaced by former Blade Adams.

It was a blow for Southampton but they would have taken the lead shortly afterwards had Nathan Tella showed a little more composure in front of goal, slicing his shot well wide when goalkeeper Aaron Ramsdale was out of position.

Tella was involved again when the visitors went ahead after 32 minutes. Referee Paul Tierney awarded the spot-kick after Ethan Ampadu brought down the 21-year-old with a challenge from behind. Ward-Prowse tucked away the resulting penalty.

The Blades should have equalised right at the end of the first half but David McGoldrick chose to try and chip Fraser Forster from the edge of the penalty area, making it an easy save for the giant goalkeeper when really he should have been given no chance.

Wilder made an attacking change for the start of the second half, introducing striker Oli McBurnie and taking off midfielder Oliver Norwood. But four minutes after the break his side were 2-0 down.

John Lundstram’s poor clearance was flicked into Adams’ path by Stuart Armstrong and the substitute hit the ball superbly on the half-volley, sending it into the top corner.

Enda Stevens put a header wide at the far post on the hour as another chance was missed by the Blades.

The hosts’ approach play continued to be sharp, neat and incisive, but, as has been the case all season, it broke down in and around the penalty area.

Wilder’s team continued to make life difficult for themselves. Lys Mousset gave the ball away this time and Ramsdale had to make a fine save to turn Tella’s effort away for a corner.

Takumi Minamino should have done better than shoot wide when unmarked inside the penalty area midway through the second half, before Ramsdale got a strong hand behind a low strike from Adams.

Ramsdale was keeping his team in the game and Nathan Redmond was next to be denied by another fine save from the Blades goalkeeper.

Frustration appeared to get the better of John Fleck in stoppage time when his robust challenge on Adams on the halfway line was late and, arguably, out of control. Tierney gave the Blades midfielder a yellow card but Saints players were incensed by the tackle and surrounded the referee looking for a red card.

There was pushing and shoving between the two sets of players and McBurnie and Jannick Vestegaard were also booked for their part in the tussle.