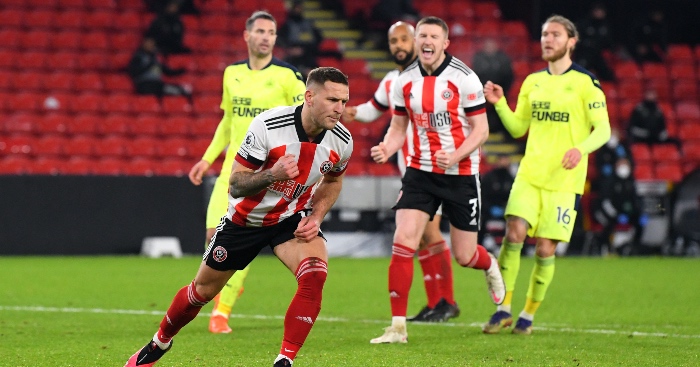 The club captain, 34, came on as a second-half substitute and showed all of his experience to remain calm and score a 73rd-minute spot-kick as the Blades won 1-0.

The goal ended a dismal run of 15 defeats in 17 Premier League matches during the 2020-21 campaign and was the least Chris Wilder’s team deserved after dominating against an unimaginative Newcastle side.

The Magpies were uninspired and mundane in the first half. Ryan Fraser’s red card then made their task even harder.

Sheff Utd were on the front foot for the majority of the first half and certainly did not look like a team adrift at the bottom of the table.

The Blades cut open their opponents on several occasions with crisp passing but, as has been the case so often this season, they were not clinical in the final third.

Reported Rangers target John Lundstram was at the heart of most things early on, threatening with a couple of long-range efforts which flew narrowly wide. He then slid a pass behind the Newcastle defence for David McGoldrick, who forced Karl Darlow into a save down to his left.

McGoldrick went close again when he got on the end of an Ethan Ampadu cross but he powered his header over the crossbar. It was a big miss by the former Republic of Ireland international.

Newcastle were unable to get out of their own half, with Callum Wilson isolated, as Wilder’s side continued to apply pressure in search of a deserved goal.

Federico Fernandez made a goal-saving challenge, sliding in to block John Fleck’s shot.

Despite the Sheff Utd dominance, it was Newcastle who almost took the lead against the run of play just before the half-hour mark. Wilson, anonymous until now, found a yard of space off the shoulder of John Egan at the near post to get on the end of Fernandez’s cross but he headed the ball wide from eight yards out.

It would have been a sickener for the hosts had they fallen behind but it served as a warning that perhaps they were being too gung-ho at times in their desperation to get that maiden win.

Fernandez made another superb block to get back and deny Oliver Burke when he raced into the penalty area as half-time approached. If the defender had got that wrong he would likely be sent off.

Fraser did see a red card before the break. Two tackles on John Fleck and then Lundstram in quick succession meant he would not be coming out for the second half – a half in which his team-mates now faced an uphill battle to get anything from the game.

Newcastle had been negative all night and with 10 men they obviously offered nothing more.

Darlow produced a fine reaction save to thwart Jayden Bogle at the start of the second half, after DeAndre Yedlin failed to properly clear the ball.

Wilder, sensing this was a golden opportunity to get that first Premier League victory on the board, made an attacking change after 51 minutes, taking off defender Chris Basham and bringing on Rhian Brewster. Sharp soon followed.

And it was the club captain who secured the match-winning penalty. A long ball forward was contested between Sharp and Fernandez into the box, with the Blades striker going down under the challenge. There was also a suggestion the ball hit the arm of the Newcastle defender.

Referee Andy Madley awarded the penalty after consulting VAR and Sharp put his team in front against the 10 men and on the brink of victory, rolling the ball into the bottom left corner as Darlow dived to his right.

However, the closing stages would not be as comfortable as the hosts had hoped. Wilson should have done better than send a header straight into the arms of Aaron Ramsdale, while Jacob Murphy found the goalkeeper’s midriff with a free-kick from a dangerous position on the edge of the penalty area.

In between, Brewster was unlucky to see his 20-yard effort strike the foot of a post.

Confusion in stoppage time between Bogle and Ramsdale put Blades hearts in mouths as a chested pass back went wrong, leaving the goalkeeper scrambling towards his line to retrieve the ball – which rolled inches wide.

Wilder’s team survived the resulting corner for a first Premier League win of the season and first in 21 games since defeating Chelsea at Bramall Lane on July 11.