Home All The News Sheffield United 0-2 Liverpool: Champs back on track 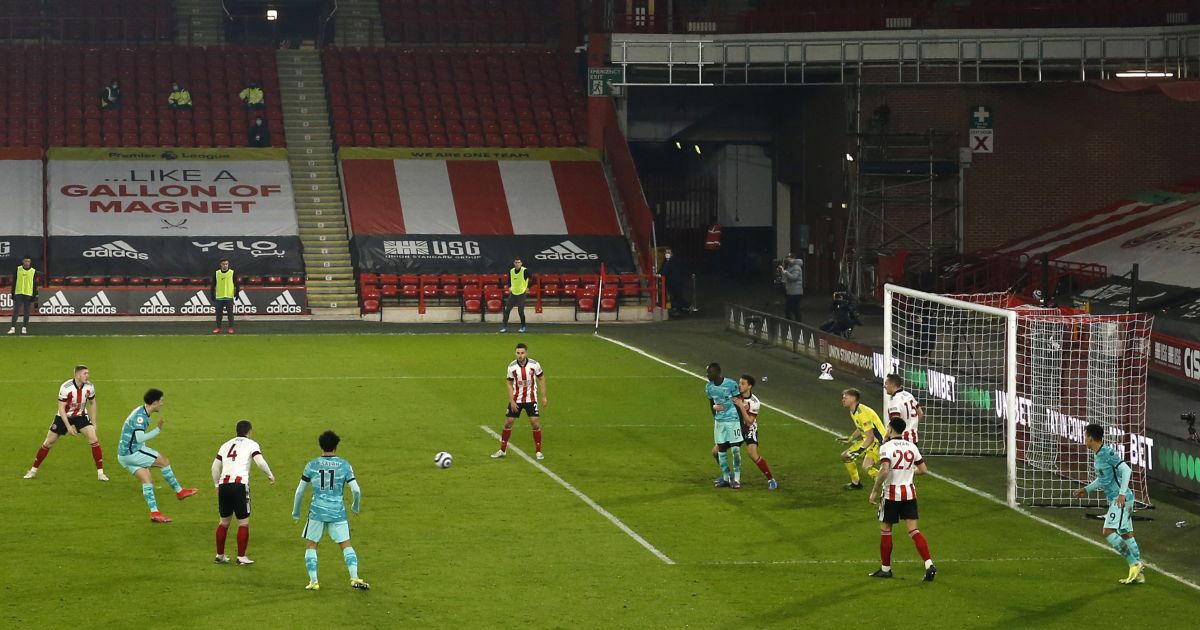 Liverpool returned to winning ways in the Premier League with a 2-0 victory over Sheffield United at Bramall Lane.

Curtis Jones and a Kean Bryan own goal ended the Reds’ run of four successive league defeats and heaped more misery on the bottom-placed Blades.

Bryan’s own goal, which was originally credited to Roberto Firmino, was Liverpool’s 7,000th goal in top-flight football and secured a win which moves Jurgen Klopp’s champions within two points of fourth-placed West Ham.

Sheffield United’s 21st defeat from 26 games leaves them 15 points from safety with a seemingly impossible battle to beat the drop.

Liverpool left out goalkeeper Alisson Becker on compassionate grounds following the death of his father Jose in Brazil.

The Liverpool players wore black armbands in support of Alisson as Adrian made his first Premier League appearance since the Merseyside derby at Everton on October 17.

The home side handed the captaincy to the returning David McGoldrick and the striker tested Adrian within the opening five minutes.

Oliver Norwood’s free-kick was flighted to the far post and McGoldrick met it to force a point-blank stop from Adrian, although a late offside flag would have ruled out the effort anyway.

Liverpool should have led after 10 minutes when the ball kindly for the unmarked Firmino.

The Brazilian advanced into a clear shooting position but failed to beat the outstretched arm of Aaron Ramsdale, even though the Blades goalkeeper appeared to go to ground prematurely.

Adrian made a smart save to push McGoldrick’s deflected effort around a post, but the action was increasingly at the other end as the half wore on and Liverpool dominated.

Ramsdale smothered efforts from Jones and Mohamed Salah before making a flying save from Trent Alexander-Arnold after the England full-back had pounced on an error from Ethan Ampadu.

Adrian was beaten after 36 minutes when Kabak slid the ball past him, but the Turkey international’s blushes were spared by an offside flag against Oli McBurnie.

Ramsdale’s resistance continued with another stop to foil Georginio Wijnaldum, and the follow-up opportunity was lost as Firmino chose to pass rather than fire the rebound goalwards.

Liverpool must have wondered at half-time what they needed to do to beat the inspired Ramsdale.

But the answer came within three minutes of the restart as Alexander-Arnold crossed from the right and Jones drilled home his second Premier League goal into the bottom corner of Ramsdale’s net.

Sheffield United players felt that the ball had gone out of play before Alexander-Arnold had reached it, but a VAR check confirmed that was not the case and the goal stood.

Sadio Mane had an effort ruled out for offside before McBurnie squandered a glorious chance to equalise, the unmarked Scotland striker heading Norwood’s cross wide from eight yards out.

It was to prove a costly miss as Liverpool doubled their advantage after 65 minutes.

Firmino played one-twos with Jones and Mane and evaded a posse of home defenders to find a shooting angle and give Liverpool breathing space.

But television replays showed the ball was going wide before deflecting off Bryan, denying Firmino his seventh goal of the season.