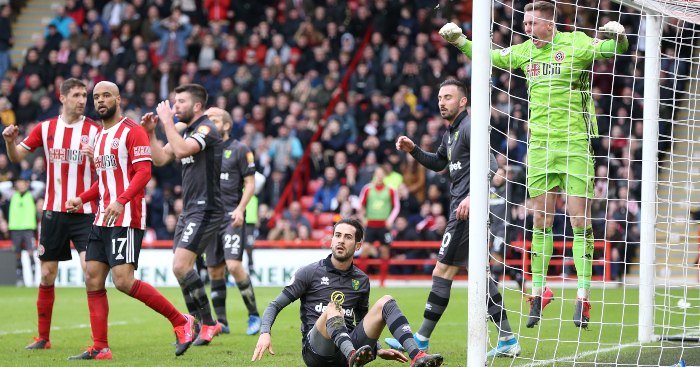 Henderson, on loan at Bramall Lane from Manchester United, has impressed in his first Premier League campaign and there have been calls for him to get his chance at international level.

The 22-year-old underlined his credentials again on Saturday with a world-class piece of goalkeeping late in the game against Norwich to preserve his side’s 1-0 lead. Called into action for the first time with 11 minutes remaining, Henderson produced a superb triple save.

Emiliano Buendia’s corner was met with a thumping header by Ben Godfrey but, under pressure from Mario Vrancic sliding in, Henderson got down by his post to make the save, before reacting to keep out Vrancic’s effort on his goalline.

The rebound fell to Josip Drmic and he looked certain to equalise, but Henderson was there again with lightening fast reactions.

The Bramall Lane faithful responded with chants of “England’s number one” and Wilder thinks Henderson, who received his first senior call up for the Three Lions in October following an injury to Tom Heaton, will get a chance to impress when Gareth Southgate names his squad for the friendlies against Italy and Denmark at the end of March.

“He’s not had a great deal to do and then he’s made some important saves, but that’s what the best ones do. Dean, in my opinion, is one of the best,” said the Blades boss.

“He has had a fantastic season and he has a big 10 games to play and hopefully some more cup games and I would be very, very surprised if he is not named in the upcoming England squad.

“He has matured and his concentration levels are fantastic, as we saw today. He’s got a huge desire to take his game to the very top. He’s a confident boy, he’s not shy, but he backs it up.”

Asked about the prospect of Champions League football at Bramall Lane next season, Wilder replied: “The stats are there and the league table is there, we can’t shy away from it. There’s some great games to come for us, starting with a huge game at Newcastle next week.”

Enda Stevens had to come off injured in the second half against Norwich but Wilder described the substitution as “just precautionary.”

For Norwich, the defeat means they remain six points adrift of safety with nine matches remaining to save their top-flight status.

Teemu Pukki missed a glorious chance to put the Canaries ahead early on but lashed his effort wide from close range via the outside of the post.

Daniel Farke will need to get his talisman firing again if his team are to have any chance of staying up this season, with his top scorer now without a goal since January 22.

The Norwich boss, a former striker himself, thinks Pukki needs a bit of luck and a “dirty goal” to get him up and running again.

“We give him lots of trust and he knows he has a head coach who backs him and trusts him,” said Farke.

“He had a good situation today and it is one where he normally scores but even such an experienced player has dry spells and suffers a bit with confidence.

“Sometimes there are times where you just have to watch the ball and it goes in, other times from four or five yards out you can’t even get it over the line.

“Teemu needs a goal from open play and sometimes what you need in this situation is a dirty goal, maybe a ball deflects in off him or the centre-back hits the ball against his back and it flies in. I hope he finds a finish pretty soon.”