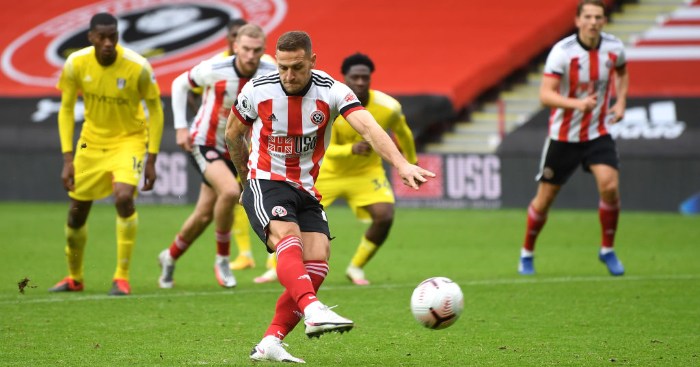 Billy Sharp came off the bench and scored a late equaliser from the penalty spot for the Blades against Fulham at Bramall Lane.

Both teams are at least off the mark following Sunday’s clash, having each lost their first four games of the campaign.

The Blades, a revelation last season with a ninth-placed finish following their promotion back to the top flight, dominated the first half but were made to pay for failing to take their chances when Ademola Lookman put Fulham in front after 77 minutes.

The goal came 20 minutes after Aleksandar Mitrovic had missed a penalty for the visitors, and it would be a spot-kick at the other end, converted with some aplomb by Sharp five minutes from time, that earned the hosts a draw.

It’s a point for the Blades 👊 pic.twitter.com/GuIkUKDMW5

Fulham looked confident early on, knocking the ball around with some authority before winning a corner from which Aaron Ramsdale was forced to make a fine save to repel Tom Cairney’s shot from outside the penalty area.

The tide soon turned, however, and Fulham’s defensive frailties, which have been so apparent this season, were exposed again by the Blades.

Alphonse Areola tipped over a long-range effort from John Lundstram and Oliver McBurnie headed narrowly wide from the resulting corner.

Chris Basham then put a chance wide before some good link up play down the right between Lundstram and David McGoldrick created a shooting opportunity for Enda Stevens, but Areola made another good stop.

The Blades were now looking confident against a very shaky Fulham defence, but the visitors still had plenty of attacking endeavour at the other end of the pitch, particularly through the waspish Lookman, and Ruben Loftus-Cheek stung the palms of Ramsdale.

Areola made a fine save from point-blank range to keep out a McBurnie header around the half-hour mark as the Blades began to pepper Fulham’s goal once more.

Chris Wilder’s team had the ball in the net after 36 minutes when Cottagers defender Tosin Adarabioyo turned the ball past his own goalkeeper, but Sander Berge was flagged offside.

Mitrovic hit a hard low shot from a free-kick which Ramsdale did well to hold on to just before half time.

The other side of the break saw the Fulham striker spurn a golden opportunity to make the hosts pay for their catalogue of missed chances.

Jack Robinson handled the ball at a corner but Mitrovic blasted the penalty over the goal and into the empty stand, with the ball clipping the crossbar on its way.

Fulham boss Scott Parker turned away in disgust. It was a huge opportunity missed for his team and an equally big let off for the Blades.

The game became scrappy for a period thereafter and Wilder’s side had lost their way a little, so club record signing Rhian Brewster was introduced from the bench with 64 minutes on the clock.

However, it did little to immediately alter the pattern of play and Mitrovic’s blushes were spared by a piece of individual brilliance from Lookman, who opened the scoring for Fulham.

The 22-year-old collected the ball inside his own half and ran at the Blades defence. He jinked past Berge and, after a slight piece of luck to bypass Basham with a ricochet, Lookman drilled a shot past Ramsdale from inside the penalty area.

Individual brilliance from @Alookman_ had given Fulham the lead at Bramall Lane but @billysharp10's penalty levels for Sheffield United #SHUFUL pic.twitter.com/hxH6T7WX8q

Mitrovic should have made it 2-0 but sent his effort straight at Ramsdale from close range, and the Serbian’s afternoon got even worse in the 85th minute when he gave away a penalty.

Mitrovic then spurned two further guilt-edged chances in injury time, heading wide on each occasion, ensuring a stalemate that left both sides looking for their first win this season.