Home F365 Features Sheffield United are without a significant weakness… 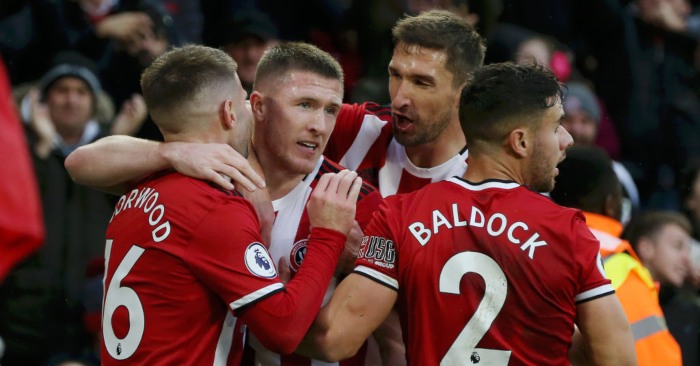 You’ve probably noticed that Sheffield United are in sixth place in the Premier League, ahead of Manchester United, Tottenham Hotspur, West Ham United and quite a few other clubs that spend quite a bit more money. Last week Daniel Storey, that incurable romantic, tried to contain himself but couldn’t resist the words ‘wondrous’ and ‘miracle’ to describe the goings-on at Bramall Lane. I rank pretty high in romantics/90 myself, but I’m also an incurable analyser, so now that we’ve had the romance, it’s time for the nuts and bolts. Or, since this is Sheffield, the knives and forks.

If you know anything at all about the current edition of the Blades, it’s that they play 3-5-2 with those overlapping centre-halves. The outside CB goes forward to team up with his wing-back and side midfielder, often creating a 3 v 2 overload. It’s not just a gimmick on top of a traditional attack, either; it’s crucial to the way Sheffield play. Largely as a result, they employ a greater percentage of wing attacks than any side in the league.

And who are the overlappers? Jack O’Connell on the left and Chris Basham on the right. Although Basham played some midfield in the Championship, O’Connell seems somewhat more confident going forward, and more likely to make the accurate pass or put in a timely cross. But both combine very well with their teammates when attacking, and have a good sense when to head up the line.

The side midfielders, John Fleck on the left and John Lundstram on the right, are an interesting contrast in styles. Fleck is at heart an attacking midfielder, the kind who might play as a number 10 in a different side. His left foot is dangerous enough that he gets half the corner-kick duties. Lundstram can surprise you with his creativity – a brilliant through ball for Lys Mousset against Everton and a stunning out-of-nowhere backheel for Fleck against West Ham are sufficient evidence – but he’s really more a box-to-box type.

Their respective stats bear this out. They’ve made the same number of open-play key passes, but Fleck has done it in 200 fewer minutes. In defence, Lundstram has a significant advantage in all the big stats: tackles/90, interceptions/90 and clearances/90. He commits more fouls too, a testament to his greater aggressiveness.

The wing-backs are Enda Stevens left and George Baldock right. Stevens is the more spectacular, and the eye test suggests he’s the more naturally talented, in attack at least. He gets the ball significantly more than Baldock (12.1 more passes/90), and the numbers give him a clear edge in key passes (11 to 4) and expected assists/90 (0.11 to 0.02). But Baldock is fairly steady, a reliable short passer, and I was surprised to see he has a much better cross completion percentage (24.3% to 9.4%).

At the centre of it all is midfielder Oliver Norwood. He’s on the ball more than any other player, and generally sets the tempo. He’s particularly adept at switching play and getting the ball to the wings quickly. His pass completion percentage isn’t terribly impressive for that position, but he plays many more long balls than your usual central midfielder. His technical prowess means he shares the corner duties with Fleck.

Speaking of long balls, here’s the spot for a surprising stat. Sheffield are second only to Burnley in percentage of passes played long, and also second to the Clarets in total aerials contested. Watch them and you’ll wonder why, because they really don’t look like a Burnley side. The answer is twofold. First, a lot of Norwood’s diagonal balls get classified as long, as they travel over 20 metres. Second, and perhaps more importantly, keeper Dean Henderson never plays it short, invariably kicking long on both goal-kicks and possessions. It’s a conservative tactic, avoiding risky play near the goal, but given the results, we can hardly complain.

And so to the strikers, those sometime recipients of Henderson’s long balls. For the early part of the season, Sheffield’s best forward man was David McGoldrick. He’s an intelligent player who can do a little bit of everything: dribble, pass, win balls in the air, make good runs, go by defenders with pace, defend from the front too. But only once, against Southampton, did he look like a reliable scoring threat, and even then he failed to convert several presentable chances. There’s some question whether he can lead the line at this level.

But hopefully that won’t matter. With the advent of Mousset, McGoldrick has been shifted into a deeper role, kind of a 9½, or what we used to call a support striker. It’s the perfect place for him: he can use all his skills without worrying about getting into prime scoring positions. Against Burnley he was flat-out brilliant as an advanced fulcrum for attacks. He played a crucial role in the build-up to the first two goals, and should have had an assist when sub Billy Sharp passed up an excellent chance McGoldrick created in leading a counter.

As for Mousset, it’s hard to know what he can do, because he has yet to get a substantial run of Premier League games. He never got a look-in at Bournemouth, and he’s taken a while to get up to fitness at Bramall Lane, only starting in the last two matches. But he has good pace and technique, enough upper body strength to hold off attackers, and a generous helping of creativity. His statline so far has been unreal, with a goal and assist every 90 minutes. That won’t continue, but there’s every reason to believe he’ll be a useful player at this level. Right now the Blades are only 14th in goals scored, 19th in shots, and 16th in xG; with the Frenchman in the house, you have to think those numbers will improve.

We move now to the defence, which along with the overlappers has grabbed the most headlines. That’s because they’re tied with Leicester City for fewest goals allowed. A few caveats are in order, though. They’re only seventh best in the league in fewest shots allowed, and only ninth best in the league in xGA. That also means the shots they’ve allowed have been somewhat above-average quality. Put it all together and they over-perform their xGA more than any side in the division.

There are also two potential vulnerabilities in the defence. One is an occupational hazard in the 3-5-2, which is getting overloaded on the wings. In Chris Wilder’s system, the wing-back marks the opposing winger and the side midfielder takes the full-back. If the opposition puts an attacking midfielder on that side, as West Ham did with Robert Snodgrass, it can cause problems unless the outside centre-half is particularly alert. Manchester City live by that sort of play, so it’ll be fascinating to see what happens when the Blades visit the Etihad during the holiday period.

United are also vulnerable to the counter-attack, because the defence has only average pace. This can be a significant danger when the centre-halves go forward. Both Arsenal and West Ham caused real problems on that score, and they were lucky to get away without conceding.

But play to their strengths, and the Blades will stifle you. Last weekend they smashed Burnley 3-0, and although they won’t score three every week, they can repeat that defensive performance at will. The Clarets aren’t a side to do wing overloads or counter-attacks at pace, and got absolutely nowhere. They managed only six shots, their lowest total of the year, and the only decent chance from open play came from a mistake, an errant clearance by O’Connell.

They often press high, but it’s a fairly controlled press, not the all-out swarming you can get from Liverpool and Man City. It seems as much designed to frustrate as to win the ball in advanced positions. They’re tied for 15th in balls won in the final third. Although the side is obviously well conditioned, Wilder knows not to exhaust them: after their most intensive press of the season, against Arsenal on a Monday night, they barely pressed at all against West Ham the following Saturday.

Not a shock result tonight. Sheffield United going with their usual back 3, high press and attacked with intensity. Pulled Saka and Pepe into uncomfortable areas. No plan B all season from Arsenal.

But even when they don’t press high, they do their share of harassing. They’re third in the league in interceptions, generally a sign of aggressive defence in your own half. Still, the overall press number is unimpressive, 17th in PPDA (passes per defensive action). But the bottom line is still pretty good – even if they’re overachieving somewhat, seventh best in shots allowed and ninth best in xGA are more than adequate. Arsenal would kill for those stats.

Let’s look now at some of the individual performers. Of the outside centre-halves, I’d rate O’Connell a step above Basham, despite the error last weekend. He’s more comfortable in possession and less likely to over-commit. Basham has considerably more tackles/90, but that’s not always the best stat for a centre-half. You can stop your man by solid positioning and alert anticipation, and that’s where O’Connell has the edge. He’s also a powerful and incisive header of the ball, and it’s no surprise that he often serves as the initial target on corner-kicks. It was his perfectly weighted header that assisted Mousset for the goal against Arsenal, and another could easily have meant a goal for McGoldrick against West Ham.

The wing-back defence numbers again show Stevens as the more adventurous. He attempts more tackles, but Baldock has the better tackle percentage. Baldock has the clear edge in the conservative qualities, passes blocked and clearances.

The one man we’ve failed to mention is central defender John Egan, like Stevens an Ireland international. He plays in the middle of the back three, and it’s instructive to compare him with fellow middleman Conor Coady of Wolves. Whereas Coady tends to stay put and clean up the messes, Egan roams proactively. He frequently comes out of the area to mark a central striker, and because the outside centre-halves go forward, he’s expected to move out wide on a regular basis. The stat that nails down the contrast is interceptions/90, where Egan leads 2.0 to 0.5. But Egan also leads the league in headed clearances, which tells you he knows how to do the basics as well.

Let’s say a few words about Dean Henderson, at 22 the most promising young keeper in the league. Despite costly errors against Chelsea and Liverpool, overall he’s been quite good. His save percentage is third best in the division, and he’s extremely impressive coming off his line to punch and claim. Unfortunately he’s only on loan, from Manchester United. But David de Gea is under contract until 2023, and if the Blades are willing to break their transfer record, maybe Ed Woodward can be persuaded to part with him. It probably wouldn’t be the best move for Man U, but lads, it’s Woodward, so anything is possible.

Summing up, Sheffield United may be over-performing a bit, but even so they’ve been fantastic. How about this: they’re in sixth place having already played the teams in first, third, fourth, fifth and seventh. The only leader missing from the fixtures has been Man City. In a season where a single match can raise/drop you five places in the table, it’d be madness to predict where they’ll finish. But now that they have a decent strike partnership, this is a side without a significant weakness.

It’s a thin squad, so injuries could change the equation, but top half is by no means out of the question. Miracles and wonders are in the eye of the beholder – but any way you cut it, it’s some fascinating football, a treat for the nerd as well as the romantic.