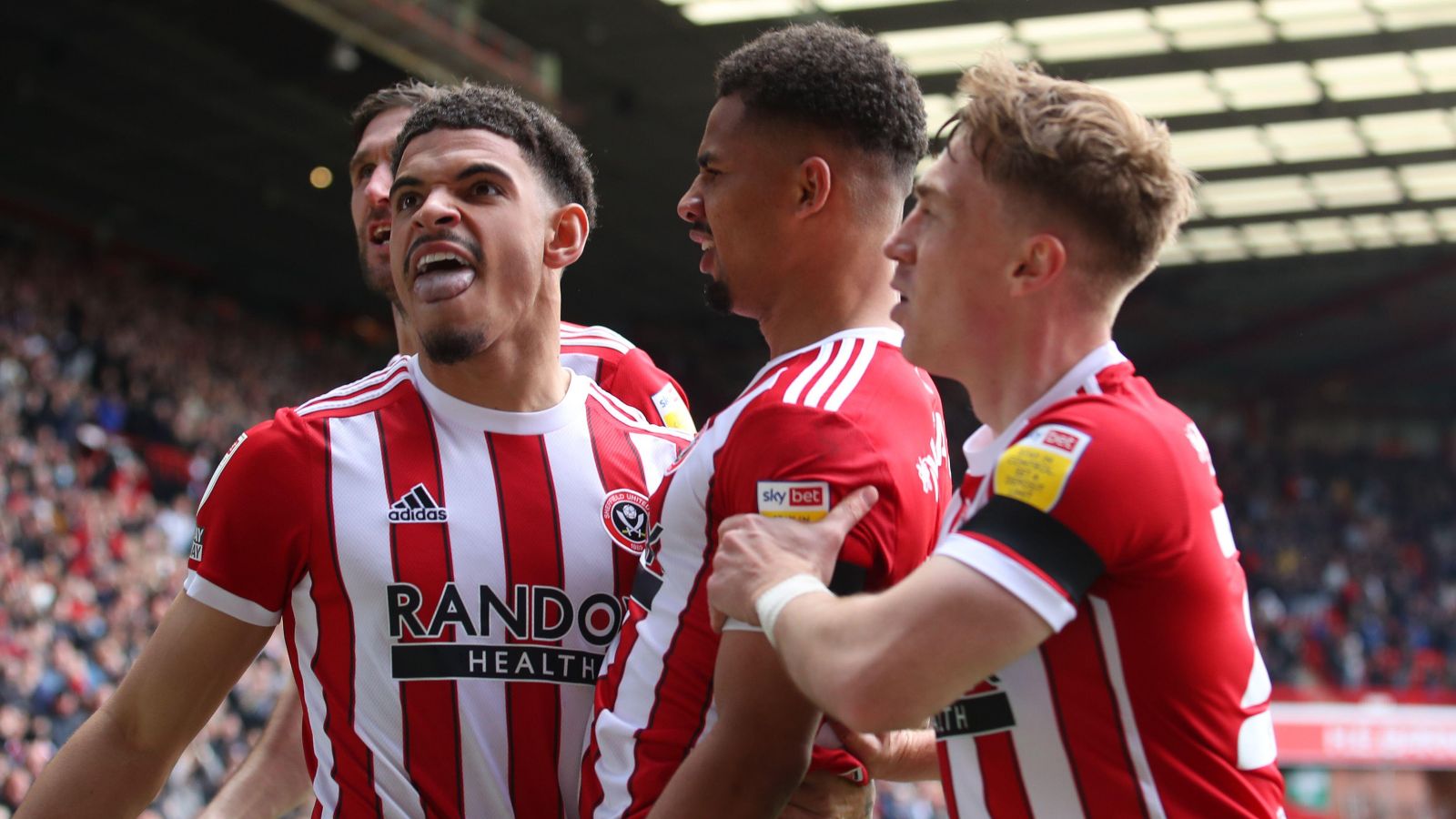 Sheffield United have not been brilliant but they are in the final Championship play-off position. Peterborough United are down.

Sheffield United, right place at the right time
Going into this weekend’s run of fixtures, six teams could lay claim to having a semi-decent chance or more of making the final spot in the play-off places their own. Out of that sextet, only one won on Saturday. Sheffield United started in pole position for sixth place and by the end of the weekend, had one foot in the end-of-season lottery. The win came courtesy of link-up play between two of their stand-out performers of the campaign, undoubted player of the season Morgan Gibbs-White providing the assist for young breakout star Iliman Ndiaye.

The worst-case scenario for Sheffield United is having a two-point buffer over the teams below them, and that accounts for games in hand being won by their contemporaries Middlesbrough, who are out of sorts without a win in five. Paul Heckingbottom’s side had been similarly off kilter in recent weeks, but this was a welcome return to winning ways at exactly the time it was needed most. One more win from their final two games should do the trick, but a London double over QPR and Fulham would guarantee the Blades at least two extra games this season: quite the feat considering their lowly position when Heckingbottom took over the reins from Slavisa Jokanovic.

Iliman Ndiaye
In a team that had become stale due to a lack of proper investment during the Premier League years but with some stalwarts revived and back to their best under Heckingbottom, this has been a breakthrough campaign. The French youngster has played in just under half of Sheffield United’s minutes this season, but his impact has been greater. The fifth goal of his campaign was his second successive 1-0 winner. That could prove to be the difference between a play-off campaign and lack thereof come early May.

Sam Surridge
Nottingham Forest’s two striker signings in the January transfer window had their positions in the squad well defined. Aston Villa loanee Keinan Davis was the undisputed new starter while Sam Surridge had to contend with playing the super-sub role, only making his first start last week in the wake of Davis’ season-ending injury.

But just as Surridge scored his third goal in second-half injury time to confound West Brom to defeat on Monday, a more important strike was what separated Forest from now-relegated Peterborough. Keep on at this rate with the next men up filling their more senior squad members’ boots so successfully and a whole division could separate the clubs this time next year.

Harry Toffolo
Huddersfield left back Toffolo was brought to the club by former manager of Town and Lincoln Danny Cowley. It would have been easy for Toffolo to regress from the standards he set himself with both clubs when Cowley received his marching orders, but the full-back has gone from strength to strength under the management of Carlos Corberan. Defensively adept at the back, Toffolo is proving decisive in both boxes. His fourth goal of the season – and 11th goal involvement – had the movement of a predatory forward. Suspect defending made it easy to tap in, but that is defending which we are unlikely to ever see from the 26-year-old. If Huddersfield do go up, don’t be surprised to see Toffolo make the transition.

The top scorers
Bournemouth and Fulham’s clash didn’t teach us much new. Something that needed no further evidence was that Dominic Solanke and Aleksandar Mitrovic are far too good for this level – 66 Championship goals between them prior to this clash between the top two. After a 98 minute tussle between the clubs, they both came away with one more added to their respective tallies. Water is wet etc.

Andi Weimann
Talking of high scorers, Bristol City forward Weimann may not be quite as high as Mitrovic and Solanke, but in scoring against former club Derby County, Weimann made it 20 for the season. Only the aforementioned pair and Ben Brereton Diaz have outscored the Austrian this term. Without his goals, Bristol City would have been in Derby’s shoes.

Hull on a high
After 40 games played brought a sixth successive home defeat, it looked like Shota Arveladze’s time with Hull could be over before it had really begun. The last six games of the campaign were a trial period for next season. Based on the evidence so far, 2022/23 could be a fun one for the Georgian and his Tigers.

The 3-0 home victory over recently resurgent Reading was full of high points and a glut of goals compared to too many dry spells this term under both Arveladze and predecessor Grant McCann.

Keane Lewis-Potter
Of course, the brightest spark currently on Humberside might not even be there this time next season. Keane Lewis-Potter looks destined to follow in Jarred Bowen’s footsteps by flourishing at the top level. Brentford have shown keen interest for some time; the next leg of Hull’s journey will almost certainly be without Saturday’s brace-hitter.

Reading, even on a bad day
It’s not often both teams from either side of a 3-0 scoreline make the same half of the column, but on a day where we were reminded just how bad Reading can be, it is worth remembering that Paul Ince’s appointment was met by near-universal expectation of relegation for the Royals. With two games remaining, they are safe.

Peterborough United
Grant McCann’s reappointment had brought hope and light to a season plagued by a lot of dullness at the end of Darren Ferguson’s third but by no means final Peterborough United stint. But the hard work from last season was already undone by the time the former Hull City manager rocked back up at London Road looking to swap the Posh’s position with his former employers.

We can blame poor recruitment and then handing Ferguson a new contract before then being understandably but foolishly reluctant to part ways with their manager until it was almost certainly too late to make a difference. Fitness problems have plagued the club from last summer – both traditional injuries taking their toll and the less unfortunate but altogether more embarrassing lack of fitness which played a big factor in their three month winless run across the new year.

Peterborough are not the first club to struggle with the step up from League One to the Championship. Rotherham and Wycombe both made instant returns to the third tier last season. They won’t be the last either, but Peterborough could and should have had enough about them this term to overcome Hull, Birmingham and Reading amongst others. There are no guarantees of another instant return to this level next year; this has felt like a waste of a season with little in the way of fun memories to carry forward.

Poya Asbaghi
Relegated on Friday. Sacked on Sunday. Poya Asbaghi had a week which makes Craig David’s seem quiet. Like McCann, Asbaghi had been put into a difficult situation thanks to mistakes which preceded his time with the club. He was not the problem, but he was not good, wise or experienced enough to bridge the sizeable gap between Barnsley and safety. There were improvements along the way – Barnsley looked more confident, better at the back, and had fleeting moments where it seemed safety was an option – but all were held back by the caveat of what had gone before.

Barnsley have been in the bottom three since the first week of October. It is likely no manager could undo the mess that is the Tykes both on and off the pitch this season. A promising manager made the jump he needed to work in English football with one of the few likely to give him a chance. As harsh as it is, he probably won’t get a second bite at the cherry.

Millwall
The very same week that Millwall’s promotion hopes went from fanciful to quite likely is of course the same week that almost certainly brought an end to such fancies. Having been spectacularly mediocre all season, the Lions saw off more streaky opponents to put themselves in a good position to make the top six.

Having overcome trickier opponents in recent weeks to stealthily climb the table, a trip to out-of-sorts Birmingham was a fantastic opportunity to stake a further claim and keep pace on Sheffield United. Benik Afobe’s late equaliser just about keeps them in it, but it is looking like a fleeting case of what could have been.

Karlan Grant
West Brom’s top scorer this season he may be, but Karlan Grant continues to attract the ire of the Baggies fanbase with lackadaisical performances which are almost certainly not entirely his fault. Grant does not suit the club’s tactics; not many in this set-up do. The news this week that Steve Bruce will be continuing in the manager role next season has not filled the Hawthorns with optimism, but it is hard to know what will when a player with 15 goals is being wished away by the fans.

The fear is that it will continue to get worse before it gets any better in this corner of the Midlands. Grant’s late penalty being saved summed up just what West Brom have been going through all season – one step forward and plenty more back. If he is moved on, Grant is unlikely to be missed.

Mark Warburton
While Stoke have been assured of their seat at the 2022/23 Championship campaign for quite some time, QPR have been harbouring ever-dwindling yet still possible hopes of getting promoted. If one club should have been ‘on the beach’ between the two clubs at the bet365 Stadium, it was Michael O’Neill’s men. Instead, another performance lacking in anything like what QPR showcased in abundance through the first two thirds of the season all but confirmed QPR will be in the second tier next season too.

Warburton will likely pay the price with his job. Partly a victim of his own success, showing how a talented squad with obvious capabilities could punch above its weight, and partly because he has been too stubborn to change a plan which stopped working long before the clocks went forward. With QPR’s season over, a decision is needed from the board as to whether Warburton is here next season or not. If it’s the latter, the Londoners could do worse than seeing out the season with designs on the next.

Cardiff City
Defeat to Sheffield United was expected, but this was a fourth defeat in five for Cardiff. If they have been playing for pride only this month, they are ending the season with next to none of it. Momentum is an overrated metric, but winning at least one of their final three games would be nice before a likely overhaul of the squad in the summer.

A non-existent relegation battle
It shows just how bad the relegated sides were – Barnsley and Peterborough much more so than Derby – that Birmingham, Bristol City, Hull City and Cardiff have nary looked over their collective shoulders once despite all having desperately poor campaigns. A non-existent relegation battle a reminder that as exciting as the Championship can be, the level playing field we would like does not exist.