Home F365 Features Sheffield United: How the f**k has this happened? 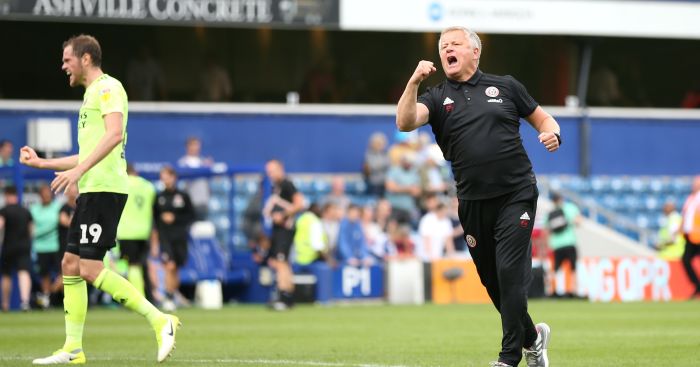 Sheffield United are top of the Championship. So we try to make sense of it all.

How the hell has this happened?
Everyone at the club is pulling in the same direction. Simple. Following their relegation from the Premier League in 2007, it has taken the Blades faithful ten years to feel good about their club again. 2008/09 saw them come close to an almost immediate return to the top flight, only for them to fall short with a 1-0 defeat to Burnley in the play-off final. The fall-out from the Carlos Tevez affair rumbled on, while United plummeted into the third tier of English football.

Six long years in League One followed, before Chris Wilder – or ‘The Messiah’ as he is known around the red half of Sheffield – led them back into the Championship in his first season in charge. They did it in style, amassing 100 points in the process and playing wonderful football. The manager, players, fans and ownership were once again singing from the same hymn sheet.

With largely the same players that got them promoted, United ended their first season back in the Championship with a tenth-placed finish: dizzying heights for a club that finished 11th in League One in 2016.

David Brooks aside, they managed to hang onto their key players like Jack O’Connell and John Fleck for this campaign, while strengthening problem areas. The Blades actually lost their first two matches this term but have bounced back with eight wins in their last ten games.

The manager and captain are both fans of the club. Basically, it’s an absolute dream set-up at Bramall Lane.

Have they spent a load of money?
Not really, especially not in comparison to some of the big-hitters in the Championship. David Brooks departed for a fee reported to be worth £11.5million, allowing for the club to reinvest in some transfers of their own. A total of nine players joined in the summer window to bolster the squad, with the club breaking their transfer record to bring in John Egan from Brentford for around £4.5million.

There has been a clear switch in transfer policy with the money going largely on players with a proven track record in the Championship. Last season saw them buy a lot more talent from the lower leagues that failed to take them to the next level. They’ve left themselves in a good position this term and Wilder has claimed that the hierarchy have barely touched the Brooks money. “There is funds still there (for January),” Wilder said. “There will be money available if needed.”

Who is the manager and why is he any good?
Chris Wilder is the man that has put Sheffield United back on the map. From his Peroni-fueled antics on bus parades to his straight-talking interviews and downright brilliant coaching, he has been a revelation.

It has been a long road to managing his boyhood club for Wilder, who has risen through the divisions from non-league. He started off at Alfreton Town, where he claimed silverware despite only being there 27 weeks before joining Alan Knill – who is now Wilder’s right-hand man – as his assistant at Bury. He left the Lancashire side to guide Oxford United back into the Football League in 2010 before moving to Northampton Town in 2014. Wilder took them from the brink of non-league football to the League Two title the following season, which eventually saw him land his dream gig in Sheffield.

Wilder has now been in charge of the Blades for 103 matches. In that time, no Football League side has recorded more wins than Sheffield United. Quite amazing.

His pragmatic attitude and refreshingly honest interviews have gone down well with the fans and players alike. He calls a spade a spade and that’s what they respect at Bramall Lane. Nobody likes being fed bulls**t in Yorkshire.

My full interview with Chris Wilder on #sufc’s immediate future – & his own. #twitterblades. Courtesy of @dannyhall04 pic.twitter.com/gk0mkkJ0E9

What is the style?
For the last three seasons the Blades have played a high-tempo, attacking brand of football that has, at times, cost them points. They work the ball high up the pitch, in and around the opposition box in an attempt to make high-quality chances and avoid shooting on sight. A 3-5-2 formation employed by Wilder sees the wing-backs as crucial, energetic pieces of the jigsaw as they need the legs to bomb forward at every opportunity. Enda Stevens and Kieran Freeman have done that particularly well so far this season.

A perhaps more unusual aspect of United’s play is the use of their centre-backs with Chris Basham and Jack O’Connell – who play either side of John Egan in a back three – driving forward with the ball. It isn’t rare to see them crossing balls into the opposition’s box from the byline.

The three central midfielders are also key to the way the Blades play, with Oliver Norwood happy to dictate play, while John Fleck and Mark Duffy are given a license to attack and drag defenders out of position.

Sheffield United closed out their 1-0 win against Hull in style! Running rings round the opposition players 👏 pic.twitter.com/KjqdvbhPYb

Is that still the same Billy Sharp?
‘There are three certainties in life: death, taxes and Billy Sharp scoring goals’ – a Sheffield United fan in 2018.

Since rejoining United for his third spell in 2015, Sharp has bagged 71 league goals in just over three seasons at his hometown club. His scoring prowess is such that the Blades haven’t lost in the last 41 games in which the former Leeds striker has scored. He already has seven this term after starting the season on the bench with Leon Clarke – last campaign’s top goalscorer – as new signing David McGoldrick was preferred up front. But the scoring machine has found a way back into the side and continues to answer his critics.

“They [critics] had a chip at him in League One and before that,” Wilder said. “It’s just a measure of the lad’s attitude. Off the pitch, his conditioning is brilliant. His general all round play is good and his training is taking him into games. We all know what Bill does and he’s still out there doing it. So, as far as I’m concerned, that tells you all you need to know.”

Does Paddy Kenny still play?
Yes, or at least we think he does – just not for Sheffield United. He was synonymous with the Blades as Neil Warnock took them into the Premier League in 2006 but, after a spell at QPR, his career was to spiral once he joined Leeds in 2012. Reports towards the end of his time at Elland Road suggested he was dropped for a match because Massimo Cellino’s unlucky number was 17 and Kenny’s birthday fell on May 17.

Since then he’s joined a number of clubs, including Bolton, Ipswich and Rotherham United, but only managed three appearances for Oldham during spells at six Football League clubs. The last trace we can find of the former Republic of Ireland international playing was for non-league side Maltby Main with no hint that he has yet retired from football.

If you have, Paddy, hit us up and we can get this updated.

Didn’t they do this last year?
Billy Sharp (of course) and David Brooks scored on October 27 last season to put the Blades top of the Championship with a 2-1 win over Leeds at Elland Road. So, not only did they do it last year, they also did it with more matches played. At that point, Fulham were 12 points behind Wilder’s men but they ended the season 19 points clear of the Blades and were promoted via the play-offs.

What makes this season different?
The plan? Learn from your mistakes and get luck – lots of luck. Last season United continued with two more wins from their next three matches before Paul Coutts suffered a serious injury that would rule him out of action for over 10 months. The ex-Derby midfielder was a fan favourite and important cog in the Blades’ machine. No longer able to control matches effectively, United struggled to break teams down and they fell away with only 33 points gained from their final 29 matches.

It may not be different this season, but their starting XI is stronger and so is their squad. They now have two dependable players in each position. Their bench at the weekend consisted of George Baldock, Leon Clarke, Paul Coutts, Richard Stearman, Marvin Johnson, Simon Moore and Conor Washington. It’s a credit to the strength of Wilder’s side when Liverpool and Wales prospect Ben Woodburn cannot even get a place in the 18.

There is a long way to go but things are looking bloody good.