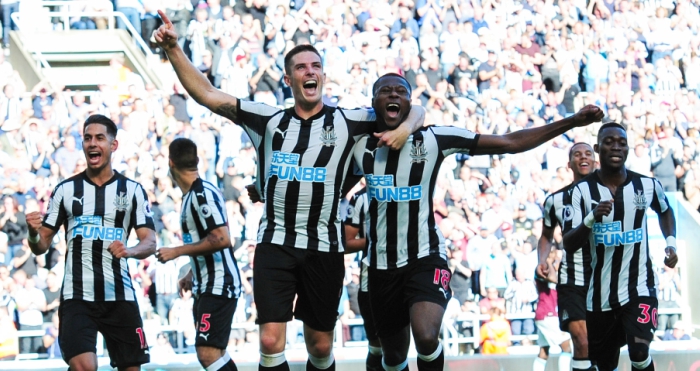 [Louise Taylor covers Newcastle United for The Guardian, and came up with the exact same opening to her weekend article as the one you’ll find here. We thought of it independently, but I’ll pretend she hacked into my computer and stole my idea, because why not?]

The good news for Newcastle United is that they absolutely thrashed West Ham on Saturday. The bad news is that Mike Ashley will use it as an excuse to keep his wallet shut – not that he needs one anyway.

It was ever thus. Yoked to one of the more parsimonious owners in recent memory, Newcastle’s players and coaches always seem to be in a fist fight with both hands tied behind their backs. In Premier League terms, the squad is desperately thin. And yet they’re back in the top flight where they belong, and are still capable of a performance like the one at St James’ Park on Saturday.

Let’s be fair, though – it was Ashley who forked out for Rafa Benitez, and it was also Ashley that spent heavily (in Championship terms) last year to make sure the Magpies came straight back up. Dwight Gayle cost £10m, Matt Ritchie £12m, and Ciaran Clark £5m. All made major contributions and promotion was rarely in doubt.

So what does the squad look like now? Three goals against West Ham, so considerable attacking potential, you’d say. But to coin a phrase: it was only West Ham. On Saturday the Hammers’ defence went from uncertain to unprintable, and three goals were the least you could expect. Remember that the week before, against Huddersfield, the Magpies’ attack was turned aside without much trouble.

Lone striker on Saturday was Joselu, and before you snicker, the Spaniard has always been a very good technical player with decent movement and hold-up play. He had an excellent hour against the Hammers, not only scoring the opener but playing target man, bringing his teammates into the attack, and delivering a couple of nifty crosses.

Gayle and Aleksandar Mitrovic are the other strikers, the former unproven at this level, the latter inconsistent and crazy. Mitrovic had a nice cameo at the weekend, breaking through twice and the second time rounding Joe Hart with frightening ease to score the third goal. But it’s anyone’s guess how he’ll perform or who he’ll antagonise on any given day.

There’s some quality in the midfield attackers. Matt Ritchie, who had several good games for Bournemouth two years ago, has decent skills and always puts in a shift. Against West Ham he put in three or four. His graft caused turnovers leading to both the first and second goals, and on the second he won the ball, exchanged passes with a teammate, then notched an assist with a beautiful weaker-foot cross for Ciaran Clark’s header.

On the other side of the pitch is Atsu, exciting and pretty raw. He always seems to be running at somebody, although his decision-making isn’t always the best. But on the first goal he made the smart pass to Joselu for the assist, where many players would have shot from that position.

Man of the match on Saturday was Ayoze Perez. We’ve been here before, of course. When he broke in three years ago, people were saying Arsenal would snap him up in no time. But as the games and the years went on, it became clear that for all his skill, he was perpetually inconsistent, tactically naïve, and not the quickest learner.

All of those things may still be true, but will provide little consolation to West Ham fans. Playing mostly in the number 10 spot, he had a good first half and a ridiculously good second. He covered the width of the field, dribbled, passed, sold meat pies, and frankly ran the show. His assist on the third goal was no more than he deserved.

Behind those three in the depth chart are young players with some potential (Rolando Aarons, Murphy) and players who have had plenty of chances (Mo Diamé).

But there’s one more attacking player worth mentioning, and worth getting very excited about: Mikel Merino, on loan from Dortmund. He’s taken over Jonjo Shelvey’s spot as a deep-lying playmaker, and has made Dr. Evil look like Mini-Me. A week after an off-and-on, petulant performance against Huddersfield, he looked poised, in control, and (what no-one doubted) highly skilled. His through ball to Atsu opened up the defence on Joselu’s goal. He’s even good in the air. And while it was he who failed to close down Aaron Mooy on the wonder strike that won the game for Huddersfield, against West Ham he was always ready to confront his man. It’s the Rafa influence, I suspect.

For this is still a Rafa team, and thus first and foremost a team that knows how to defend. They kept Spurs at bay without much trouble until Shelvey was sent off, allowed only seven shots to Huddersfield, and then only eight to West Ham, an attacking side that managed 16 at Southampton despite being down to ten men for an hour.

The names of Saturday’s back four don’t exactly bring to mind the glory days of catenaccio: Javier Manquillo, Jamal Lascelles, Ciaran Clark, Chancel Mbemba. Mbemba is an emergency left-back while Paul Dummett is out, and to be honest played like one on Saturday. But the other three were excellent.

Manquillo, who rarely looked the part at Liverpool or even (shudder!) Sunderland, looks like a solid, capable right-back under Benitez, who gets forward on occasion and generally does his duty. Lascelles, deputising for the injured Lejeune, didn’t put a foot wrong and as usual won his share of aerial duels.

And then there’s Clark. Back in the day, I rated him, and thought he was going to make a useful top-flight centre-half. Shows what I know. By the time Aston Villa went down you’d have bet against him ever being a success in the Premier League, or anywhere else. But now he too plays for Benitez, and along with a goal and a clearance off the line, on Saturday he played with assurance and leadership.

We won’t really know about Lejeune until he comes back, which shouldn’t be too long. Also in the squad is DeAndre Yedlin, a right-back who had an okay stint with (shudder again!) Sunderland and could push Manquillo.

Another defensive player is Isaac Hayden, the guy who sits next to Merino in front of the back four. With Newcastle dominant against West Ham, he spent a fair amount of time getting forward, but will probably spend more time this season screening. A good player at Championship level, he’s also an unknown quantity in the top flight.

Keeper? Well, that’s still kind of iffy. Rob Elliot has had some good games in the Premier League, but perhaps he doesn’t get to as many balls as he should, and his distribution is substandard. On his day, Karl Darlow might be an improvement, but if someone can find the well-hidden key to Mike Ashley’s strongbox (or the even more well-hidden key to his heart), the swag would be well spent on a quality goalkeeper.

After the match Rafa once again pointedly called for reinforcements. Silence from upstairs, of course. But survival prospects look a bit better today than they did on Friday. Maybe a solid defence will be enough. Maybe Merino will play like a Dortmund regular. Maybe Perez will become another Kaká. Finally, there remain a few days left in the transfer window – and just maybe, as the old joke goes, the horse will talk.