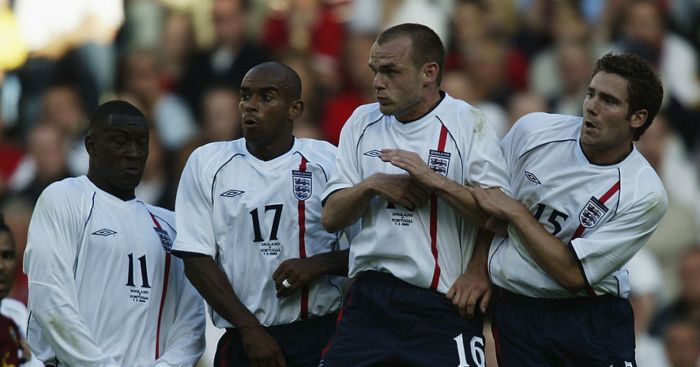 Danny Ings will be hoping to improve on his solitary England cap this Saturday, having played for just 30 minutes on his debut five years ago. With seven uncapped players in the squad ready to play against Iceland and Denmark, they’ll be hoping their international careers last for longer than half an hour. Here’s a team made up from those unfortunate souls who couldn’t even manage a full game in an England shirt.

Goalkeeper: Nigel Spink
Former Aston Villa goalkeeper Nigel Spink played one half of football for England in the summer of 1983, coming on for Peter Shilton after the interval in a game against Australia. Spink had made a name for himself the previous year, replacing the injured Jimmy Rimmer (whose England career also lasted 45 minutes) in the European Cup final and maintaining a clean sheet as Villa lifted the trophy after a 1-0 win over German giants Bayern Munich. If you fancy a goalkeeper challenge, try naming two current Premier League keepers who have appeared in an England shirt for only one half.

Right-back: Martin Kelly
The proud owner of the England No. 5 shirt at Euro 2012, Martin Kelly played zero minutes in Poland and Ukraine. However, the Liverpool defender did have some international experience going into the tournament, coming on for Phil Jones in the 88th minute of a friendly against Norway. Jon Flanagan got a few more moments in an England shirt than his former Anfield team-mate, coming on midway through the second half in a 2-2 draw with Ecuador in 2014.

Centre-back: Ryan Shawcross
Shawcross started his international career after coming on in the 75th minute in a friendly against Sweden in 2012. Zlatan Ibrahimovic scored three times (including THAT overhead kick) in that time to ruin the Stoke defender’s debut and future England prospects. Carl Jenkinson also made his only senior international appearance in the match, as did Steven Caulker. Heady days for England fans.

Centre-back: Anthony Gardner
Fikayo Tomori’s England career has only lasted ten minutes so far but the Chelsea youngster could still get another taste of international football in the not too distant future. The same can’t be said for former Tottenham defender Anthony Gardner, who played 45 minutes for England in 2004. Gardner lined up alongside Gareth Southgate at the back after the pair replaced John Terry and the undercapped Jonathan Woodgate at half-time in a 1-0 defeat to Sweden. Zlatan, if you were wondering.

Left-back: Nigel Winterburn
Despite winning three league titles and two FA Cups with Arsenal alongside one-club legend Tony Adams, Nigel Winterburn found himself firmly behind fellow Premier League golden oldie Stuart Pearce in the England set-up during his long career. He replaced Pearce midway through the second half in a friendly against Italy in 1989 and added 45 minutes to his international career four years later after replacing Lee Sharpe in a defeat to Germany. Michael Ball and Stephen Warnock are other full-backs whose England careers lasted less than 90 minutes.

Right-wing: Mike Phelan
Manchester United assistant Mike Phelan made his international debut alongside Winterburn in 1989, coming on for club team-mate Bryan Robson after the interval. Despite achieving domestic and European success with the Red Devils under Sir Alex Ferguson in the early ’90s, Phelan was never called up again. Nathan Redmond is a potential option on the wing for this side but at 26 he still has time to add to his substitute appearance against Germany in 2017.

Central midfield: David Dunn
James Ward-Prowse may well improve on his 20 minutes of international football this week, whilst James Maddison and Lewis Cook have plenty of time to add to their solitary caps. David Dunn looked certain to appear regularly for England back in the early 2000s after impressing for Blackburn Rovers but only managed one half of football for the Three Lions, coming on for Steven Gerrard in a 1-1 draw with Portugal in 2002.

Central midfield: Lee Bowyer
Current Charlton boss Lee Bowyer will be squaring off against Fleetwood Town manger Joey Barton in League One this season and the two are also in competition for a midfield place in this side. Bowyer featured in the same match as Dunn back in 2002, starting against Portugal, whilst the ever-loveable Barton came on for the final ten minutes of England’s 1-0 friendly defeat to Spain back in 2007. Ryan Mason, Lee Hendrie, Jack Cork, Seth Johnson, Gavin McCann and former Crystal Palace hero Andy Gray are other midfielders to have worn the England shirt for less than a full game.

Left-wing: Mark Walters
Former Aston Villa, Liverpool and Rangers winger Mark Walters starts on the left for this side, having played 70 minutes for England back in 1991. Alan Thompson got 60 in 2004 and Matt Jarvis’s international career was even shorter, with the ex-Wolves man coming on for the last 20 minutes in a friendly against Ghana in 2011. However, Jarvis and Thompson were lucky compared to Watford’s Nathaniel Chalobah, who came on in extra-time against Spain in the inaugural Nations League tournament.

Striker: Chris Sutton
Ings looks set to improve on his half-hour cameo against Lithuania in 2015, leaving Chris Sutton to start up top for this side. The former Blackburn Rovers striker may have his mind on fixing modern football these days but back in the ’90s he was part of a Premier League-winning attack alongside Alan Shearer. Whilst the Geordie legend went on to win over 60 caps, Sutton made just one England appearance: as substitute for Paul Scholes late into a 2-0 win over Cameroon in 1997.

Striker: Dean Ashton
Still only 36, yet retired for over a decade already, Dean Ashton’s England career lasted just one half of a 3-0 friendly win over Trinidad and Tobago in 2008. Injury cruelly prevented the former Norwich City and West Ham striker from proving his worth on the international stage. Former Bolton Wanderers forwards Kevin Davies and Michael Ricketts have less than 90 minutes each in an England shirt, as do David White, Paul Stewart, Frazier Campbell, Dominic Solanke, Francis Jeffers, Jays Bothroyd and Rodriguez, as well as the scorer of the greatest goal in England history, David Nugent.