Home Manchester United Should £100m buy you more than ‘moments’ from Sancho? 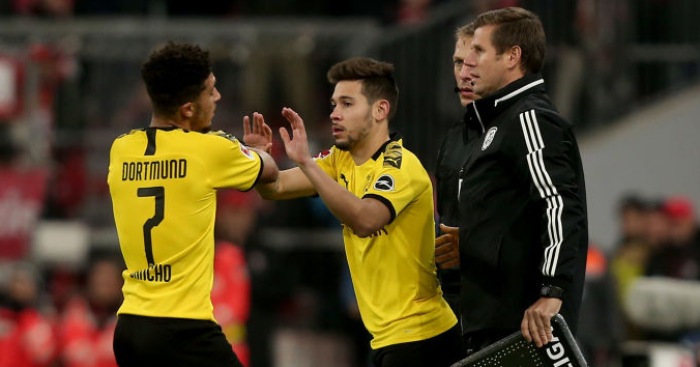 ‘Right now, there is no compelling argument for Southgate choosing Rashford over the man that Manchester United covet,’ were words I wrote in September. But here we are in November and there are compelling arguments aplenty. It seems apt that it was Jadon Sancho who started last month’s England defeat in the Czech Republic, and featured in a brace of substitutions after 73 poor minutes. Three days later he was on the bench for a 6-0 victory over Bulgaria, having ceded his place to Marcus Rashford. Both feature in Gareth Southgate’s latest squad but right now, it is the Manchester United man’s stock that should be higher than the man his club supposedly covet.

After that sobering England experience, Sancho then returned late to Dortmund from international duty and found himself on the naughty step for the victory over Borussia Monchengladbach, before returning to the Dortmund line-up to spurn two gilt-edged chances in Milan and then play 90 wasteful and frustrating minutes in a 0-0 draw against Schalke. That was enough to see him dropped for a 3-0 win over Wolfsburg before he returned for a game of two halves against Inter in Dortmund: First awful, second inspired.

But the euphoria of that 3-2 comeback against Inter lasted only four short days as Sancho was embarrassingly hauled off just 35 minutes into Dortmund’s Der Klassiker thrashing. Injured? Coach Lucien Favre was in no mood to protect the winger, saying:  “I think you saw he was not good enough today. He was not injured.” Ouch. Probably a little too much ouch for a 19-year-old, but Favre is clearly frustrated by Sancho, a player whose last Bundesliga goal came back in September. He would probably quite like a slice of the footballer everybody tells him is worth over £100m.

‘He’s been poor more often than he has been good,’ is the verdict of Dortmund fan site BVB Buzz, who included him in their list of three players who have to improve this season. They talk of ‘flashes’ and ‘moments’, which sounds perfectly reasonable when we are discussing a 19-year-old. Teenage wingers do not generally offer consistency and it’s clear that Sancho is going through a slump, with the player himself admitting last week that “it’s been a hard month”. Which is why persistent talk that he is the ‘dream’ signing of United sounds a little curious. If you are breaking the British transfer record, you really should expect more than ‘moments’ and ‘flashes’; Daniel James provides those and he cost just £18m.

Sancho is young, English and exotic by association because he plays in Germany, and all that has conspired to multiply his price tag somewhere north of £100m. It’s important to remember at this juncture that £100m is a mark breached only five or six times – and never by a Premier League club – and it really should not be spent on potential. Is Sancho more than twice as good as the Raheem Sterling of four years ago? Unless the answer to that question is a resounding ‘yes’, no club should pay close to that price.

And it is Sterling who has inadvertently handed Sancho a route back into the England starting XI this week; his self-inflicted loss from the clash with Montenegro is probably Sancho’s gain, with the Dortmund man likely to feature on the opposite flank to Rashford in an audition for next season if United find a way back into the Champions League. There will be scouts watching very closely because to justify that kind of fee, he absolutely needs to be the best player on the pitch.