Home F365 Says Should Cardiff turn the clock back to Dave Jones? 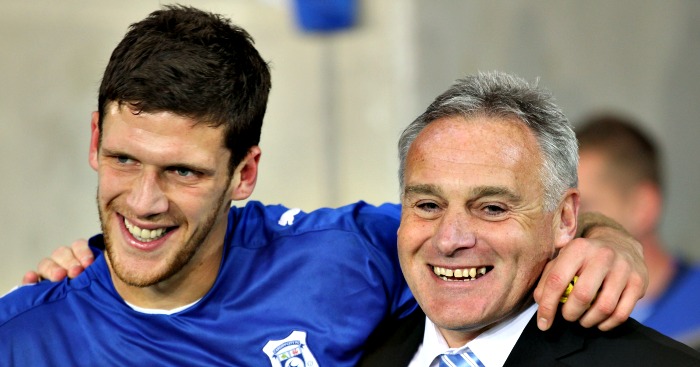 Cardiff City finally sacked Paul Trollope on Tuesday, weeks after fans had called for his head. It’s been a sorry start to the season for the Bluebirds, who sit in 23rd place in the Championship with just two wins all season.

An experimental switch to the Welsh 3-5-2 system (Trollope was part of Chris Coleman’s backroom staff at Euro 2016) was soon abandoned, as it became clear that the squad did not contain the quality needed to utilise the system properly. Anthony Pilkington is no adequate replacement for Gareth Bale. Who knew?

So who should replace Trollope? It’s been the question doing the rounds on social media and on various Cardiff City forums, with few realistic targets available.

Craig Bellamy is one name mentioned; the former Bluebird hero has been linked to the job on many an occasion. There’s little doubt that Bellamy will manage Cardiff City one day, but is now his time? I doubt so. In their current predicament, the club requires a manager of experience; someone who knows the division well and can make the side robust and combative as they seek to climb out of the relegation zone and pull themselves up towards the play-off spot the board crave. They tried an inexperienced manager. It failed.

Neil Warnock has been identified as the main target, apparently, but will the seasoned manager fancy a challenge in the Welsh capital? He’s been critical of owner Vincent Tan in the past, so could the pair put their differences aside to work together for the benefit of the club? It remains to be seen, but Warnock is the type of manager that the board should be targeting.

With experience of the division imperative, maybe the board should look closer to home. Former manager Dave Jones should be on their shortlist over the international break.

The Scouser made plenty of enemies during his time in South Wales, particularly within the local media, but few can doubt his credentials in the managerial hot seat.

Jones took over the club in 2005, a year after he left Wolverhampton Wanderers. The club were in a similar position to how they are now: Finances weren’t secure, there were few prospects for the season and the players were underperforming.

He undertook a large rebuilding task, secured a respectable finish of 11th place in his first season, and improved the squad on a shoe-string budget. Ring any bells?

Jones would be tasked with doing a similar job again at Cardiff, with owner Tan seemingly reluctant to invest more money into the club.

In the transfer market, Jones was shrewd and brought in many players who would star in south Wales. Glenn Loovens joined on loan from Feyenoord before signings permanently; Jay Bothroyd hit the best form of his career, as did Michael Chopra and Roger Johnson among others.

It was also Jones who gave Aaron Ramsey his full Cardiff City debut and helped develop one of the finest Welsh talents in recent years. With promising youngsters such as Emyr Huws, Declan John and Kadeem Harris in the current squad, Jones could be the man to help them realise their potential.

On the pitch, Cardiff were dangerous and exciting. Jones built arguably the best Bluebirds team in years. The Cardiff City Stadium hasn’t seen an exciting brand of football since Jones left the club, despite Malky Mackay’s success.

It’s something football fans everywhere crave and it’s no different in south Wales. Despite doing OK the biggest criticism of Russell Slade was the negative tactics he employed.

Crowds at the Cardiff City Stadium have plummeted in recent years, with the average home attendance dropping by over 6,000 last year compared to Jones’ last season in charge.

His exciting brand of football could encourage the fans to return, whereas a more negative manager could convince many more to stay away.

Comparing Jones’ prime years at the club – 2009 to 2011 – to Slade’s two-year tenure of 2014 to this summer, it is evident that the Scouser’s style of play is more appealing to the general fan. Jones averaged 22.5 wins a season; Slade averaged just 16.5. Jones’ Cardiff sides averaged 74.5 goals; Slade’s managed just 56. Even in defensive terms, the numbers are 56 goals conceded to 54 conceded – again, in Jones’ favour.

Would Jones be the most popular appointment? Probably not. He would however be a safe pair of hands who knows the division and the club well, and would encourage his side to play a more expansive brand of football.

Despite sacking him in 2011 after another play-off failure, Tan is still fond of the former Southampton manager. Rumour has it he wanted to give Jones the job ahead of Slade in 2014, but Chairman Mehmet Dalman persuaded Tan to change his mind.

They say never go back, but after a successful first spell in charge of Cardiff City, which included a play-off final and a FA Cup final, the club could do a lot worse than turning back the clock to Dave Jones.