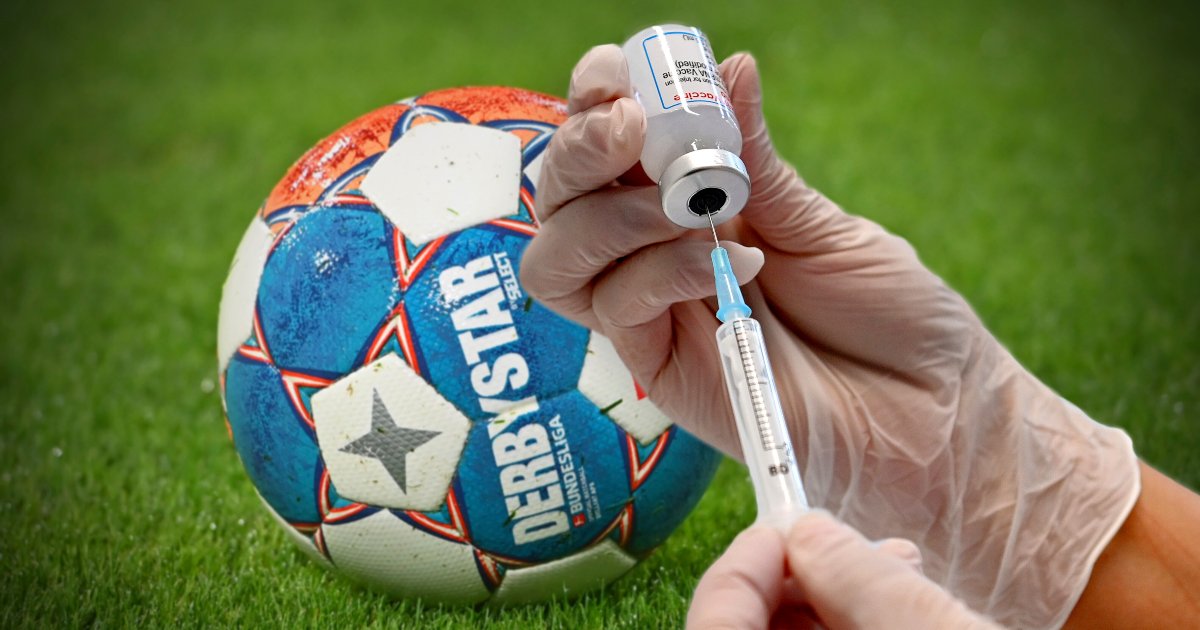 With a far more contagious Covid variant spreading like wildfire through football and society and well over six million people totally unvaccinated – many of them apparently footballers, seemingly happy to spread Covid around like shaking a bottle of bacterial champagne – you’d hope the FA, the Premier League, the EFL, UEFA and FIFA are all taking notice and drawing up plans to cope with a severely disrupted second half of this season. It’s already a bit of a mess and is set to get worse very soon.

The FA should now mandate player vaccination as a qualification for playing.

If anyone refuses to say if they have been vaccinated, we can be pretty sure that they haven’t. And by the way, don’t give us this ‘it’s a private matter’ nonsense; when your choices are going to make yourself and others ill, help the virus to create more variations, utilise severely pressured healthcare resources, even make people die, you better believe it’s of interest to all of us. If you’re harming us, we’re bothered about it. It isn’t private, it is very public. Protestant faiths, Islam, Roman and Orthodox Catholicism, Judaism, Hinduism, Jainism, Buddhism, Jehovah’s Witnesses and more have no prohibition against vaccination.

Clubs need to get tough with the anti-vax people and others who are just hesitant for other reasons. I presume unvaccinated players will still want paying while they’re in bed with Covid or are having to isolate at home? If they get long Covid and can’t breathe properly, they’ll still want paying for the duration of their contract, won’t they?

Maybe now is the time to consider giving them the opportunity to choose between wages and vaccines. Fine, don’t get the jab, but you won’t be paid until you do. You won’t play until you do. Or maybe make it simple; not being vaccinated invalidates your contract with the club.

Of course, such a decision would be challenged as a breach of contract, but if you’re wilfully putting yourself in harm’s way, the club’s lawyers will say it is the player who is actually in breach of contract, in the same way they would if they were playing Russian roulette with a .44 Magnum. Covid is a preventable illness, but they’ve chosen not to prevent it. Should that be consequence-free for the player? Because it certainly isn’t consequence-free for the club.

While the booster jab will help suppress serious illness or death from Covid, if football’s community has a significant number of wilfully unvaccinated people, and the general population remains 10% unvaccinated, football’s fixture list stands on the verge of being decimated in the New Year, if some predictions of the speed of the spread of Omicron are anywhere near being right.

This isn’t like the old school disruptions for snow before the planet was on fire. A snowy winter would always create a fixture pile-up in the spring, but eventually they’d get through them by the end of May. But with Covid, there are so many variables that disruption could be long and fractious.

Players will almost certainly be affected in waves and all at different times, creating a domino effect that washes up and down the leagues, affecting all clubs. It’s already happening. Brighton are fine but can’t play Spurs because Spurs are riddled with the disease and had eight positives, but Leicester had seven out and still played Newcastle, WBA had four out but the game went ahead. Manchester United are reporting a “small amount” of their squad is infected and the Brentford game may be called off. QPR’s game has been called off due to their high infection rate. This is what the second half of the season is going to be like.

It isn’t hard to see chaos coming around the corner. Spurs’ unilateral decision to cancel the Rennes game has already caused problems with UEFA and with Rennes themselves. The game is forfeited, but then, Spurs don’t want to play in the Europa Conference league anyway. There must be widely accepted rules so everyone knows where they stand.

We need some structures in place to govern this. There has to be a set number of infections in a first-team squad that triggers the calling off of a game. We can’t just have judgements made on a case-by-case basis.

If everyone at all clubs is vaccinated and some infected players are asymptomatic but not actually ill, can they play? We need an informed decision. If it is only the unvaccinated that are at risk from serious ill health or worse, should we just play on and sell it to the anti-vaxers as yet another reason to get the jab? Or is stopping the spread of the disease to limit the chances of new variants constantly developing the overriding concern along with not ruining the NHS? What does football think about all these issues?

If competitions are badly affected and all the games just can’t be rescheduled, we need a plan in place to work out how to decide the league positions and after how many games. How long into the summer do we keep playing if games are still outstanding? And how will all of this affect the World Cup in November? Do we have a cut-off day to end 21/22? Do we need some sort of Pools Panel consisting of Ian Callaghan, David Sadler and Tony Green to assign wins, draws and losses to games? Or does everyone just have to play games with any players that are available, no matter how many are ill? Nothing is clear right now and it absolutely should be.

We need decisions on the status and dangers of unvaccinated players, we need to address the pandemic within football with rationality and logic, not in rumour and ludicrous paranoia. Clubs have a duty of care to their employees, but the employees have a duty of care to each other and the rest of society. If some are rejecting that principle, surely it must have consequences for them. Let’s establish exactly what they are and work out what football will look like in 2022.