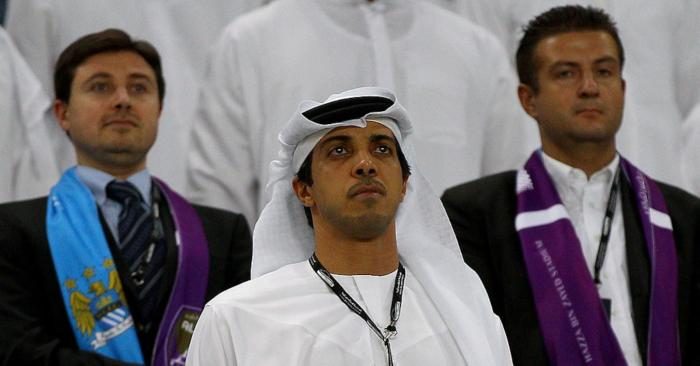 I was in a pub and the Manchester derby was on the television. Three lads in their mid-20s came in, one ordered a round, set three glasses down on the table and declared. “So we’re agreed, right? No politics. We have a drink and watch the match. But no politics.” They all nodded in agreement, took a sup of lager and turned to the screen. As Manchester City scored, one of the lads piped up. “He’s great but he was bought with money from a state that kills gay people.” The other two turned and jabbed him verbally. “No politics!”

It was an interesting little vignette and I’d wager typical of many.

As City hurtle towards another title playing anywhere from wonderful to amazing football, should we be like that lad in the bar? Or can we ignore the fact that City’s owner is a member of a royal family that runs a country which is happy to make being gay punishable by jail, by being flogged, beaten, tortured or by plain old death. Murdered by the state for being gay; how do you get that past the Fit and Proper Person’s test? Surely no amount of investment cleans that up?

Add in a litany of other well-documented human rights abuses and that’s before we get to any other sports-washing and financial doping allegations and it is surely understandable that many feel a bit queasy, to say the least. I would not think even the most tribal one-eyed City fan would seek to defend the murder of gay people in return for 31 wins per season.

Personally, I can never let it go. Every time I see them it is always in my mind. I try and try and try to forget it and just enjoy the art of their remarkable football. But I can’t. It just feels too egregious an example of gross immorality. I’m sure I’m not alone in this.

Just a reminder that @ManCity and @NYCFC owner’s oppress women and gay communities within the Middle East. Just wanted to remind everyone before they start wearing fucking rainbows everywhere for their specific prideraiser and any local community efforts. #NYCFC  #ManCity

But am I being ridiculous about this? Childish, even? Am I just wrong to feel like this? I mean, if you followed this through on everything, you could be troubled by a moral objection to almost everything. You’d never never listen to some great musicians, never see great works of art, never read great books because many are made by people who did very bad things indeed. Okay, they probably were not in a royal family that run a country that endorses gay murder, but hey, it’s all a sliding scale, isn’t it?

You’d also find it hard to get work because the interconnectedness of everything means you can always trace your wages back to something reprehensible that someone involved in the business has done. Basically you can find something wrong with doing virtually anything.

Can you support a football club without indirectly supporting or being uncritical of the owners’ predilection for that old habit of slaughtering the feck out of gay people? Perhaps I am just being unsophisticated. The club isn’t the owners. The club is a separate thing altogether. Owners, players and manager come and go but the club remains and that is what you support.

Maybe. If so, we need to work out what a club actually is, if it isn’t a business owned by someone. It is a hard question to answer because I think we all feel our clubs are conceptually above and beyond being a mere business that turns over money and makes losses or profits. But what is the word we use to describe what that is? We wrap metaphysical things like notions of our self-identity, local and civic culture around football clubs. You don’t do that about a business, or not usually. No-one feels like that about B & Q, Travis Perkins or Boots.

And it’s worth bearing in mind that we all buy things usually without any knowledge about who made it and under what circumstances. We buy loads of things from China, which is hardly a beacon of democracy and open-minded thinking.

It is also true that the Premier League was set up to be a Big Money business, to make its participants wealthy. And where Big Money is, any amount of corruption, dirty dealings and various abuses seem to follow. Okay so City’s ownership endorses lots of human rights abuses but other companies that own our football clubs are far from perfect either. I mean, many clubs in the Premier League contract companies for outsourced services who do not pay the Living Wage, despite a time of financial largesse. Okay, it’s not up there in the ranks of evil with murdering homosexuals but it’s, at the very least, mean.

Horrible things happen all the time all over the world, do we have to care about them all? That’d be exhausting. It’s already bad enough having to work out if buying green beans from Kenya is good or bad. Yes, City’s owners run a country high up in ahuman rights abusers, league table, but you might argue that supporting England is supporting a country that grew rich on the plundered wealth of other nations in the cause of bloody imperialism.

I’m sure if we investigated the dealings and doings of all the top-flight clubs, we’d find the whiff of sulphur often present. Indeed, I would like a human rights organisation to make us a league table so we know just how relatively bad or otherwise owners are, so that we can make informed choices and not brush these things so readily or easily under the carpet.

Irony of Man City fans calling Burnley anti-football. Their entire club is just a part of a propaganda machine exploiting the popularity of football to hide the human rights crimes of a country behind a veneer of skyscraper supercar luxury. Definition of anti football. Wank club.

If you can divorce admiration of City’s football from the UAE regime, I almost admire you. I have a feeling it is the grown-up thing to be able to do. I can’t. But then I still listen to the music of musicians who routinely had sex with 14-year-old girls. So what do I know? This stuff is complicated and, as I say, it is almost impossible to be apply a consistent moralistic policy across the board of life and thus it is almost impossible to not be, to some degree, hypocritical about those you reject and those you don’t. But just giving up in the face of the overwhelming wrongness of the world doesn’t seem right either. And you can absolutely see how a successful football club casts a healthy golden glow onto that which is anything but golden.

The fact remains that Manchester City’s owner and £1.3 billion investor is the member of a royal family that runs a country which has a truly terrible human rights record. I doubt many of us would ever have thought that could happen back in the days of Albert Alexander and I don’t believe that makes anyone feel happy or proud and if it does taint absolutely everything the club does for some of us, no-one, least of all any City supporters, should be overly critical of how we feel.