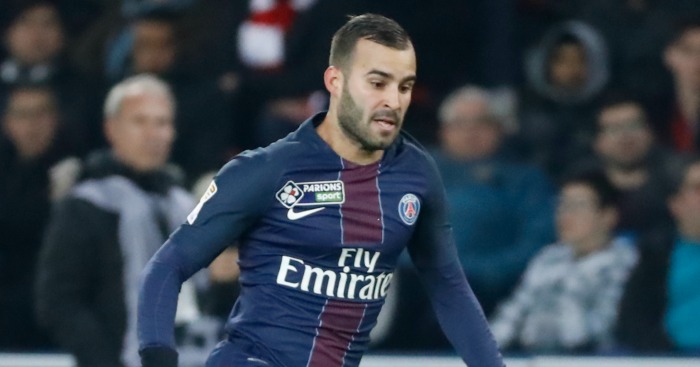 Adrian Ramos (Borussia Dortmund)
You feel a bit for Adrian Ramos, the striker Dortmund signed from Hertha Berlin in July 2014 for a fee of only £8m. Dortmund have played either a 4-1-4-1 or 3-4-3 formation for much of this season, and both call only for one central striker. Expecting to get ahead of Pierre-Emerick Aubameyang in the queue is nothing but wishful thinking.

Yet Ramos is hardly a flop, and would be forgiven for wanting to be the main man elsewhere. He’s scored three goals in his four league starts as a central striker, is excellent in the air and also thrives on bringing others into play. Think a budget version of Romelu Lukaku.

Now 30, Ramos has a decision to make about whether he sticks it out at Dortmund until Aubameyang leaves, hoping the club don’t reinvest the proceeds on another striker, or agitate for a move. He really could be excellent in the Premier League.

Jese Rodriguez (Paris St Germain)
“Like Paris St Germain, I have big ambitions for the coming seasons and it will be a great pleasure to work under the direction of Unai Emery, who has developed an excellent reputation in Spain, and across Europe, for his quality as a coach. I can’t wait to begin this next challenge of my career” – Jese Rodriguez, August 8, 2016.

“Jese needs to play. When he has played I have been pleased because he has worked well and is involved with the team. Yet it is difficult for him to get the continual playing time that gives him confidence. So we have spoken about, and we will analyse after the break, the possibilities that are best for the team and best for him, keeping in mind what will help him meet his expectations as a footballer” – Unai Emery, January 2, 2017.

How to have a dream move go sour in less than five months. Jese cost PSG over £20m, but has started a single Ligue Un game since. When your manager says “we will analyse” your position at the club, it’s time to have a word with the agent. Liverpool have been strongly linked, but even West Ham or Everton could consider the former Real Madrid striker within their reach now.

Fernando Torres (Atletico Madrid)
Oh come on, who wouldn’t love to see Nando back in England? Yes, the magic may well have been lost forever, yes, we still yearn for that incredible Liverpool form and yes. it would quite possibly be a waste of wages, but you won’t change my mind. If Hull can be linked with Samuel Eto’o, the campaign to get Torres to Middlesbrough starts here.

The assumption is that Torres is perfectly happy seeing out his football days at Atletico Madrid, but that might not quite be the case. The striker signed a one-year contract last summer but has seen far less action this season, starting only two La Liga games after 17 last year. The likelihood is that he will leave Madrid this summer.

Is it probable? No. Is it possible? Probably not? Should we stop believing? Of course not.

Stevan Jovetic (Inter)
In the last week alone, Jovetic has been linked with moves to Sevilla and Fenerbahce; he’s clearly not staying at Inter for any longer than he has to. The Nerazzurri have endured another dire season, and yet still Jovetic can’t get a game. The Montenegrin’s league season consists of 67 minutes across five substitute appearances.

Still only 27, Jovetic’s career is grinding to a halt. He started only 11 games in two years at Manchester City after joining with a glowing reputation, and things have gone even worse back in Italy. The likelihood is that he ends up in Turkey, but would a move to the Premier League really be out of the question? Underneath it all, there’s plenty of talent.

Joel Pohjanpalo (Bayer Leverkusen)
The left-field entrant on this list, Pohjanpalo gained notoriety in September when he scored a hat-trick against Hamburg despite coming on as a substitute in the 72nd minute. When even that doesn’t substantially increase your chances of league starts, you know you’re near the bottom of the pecking order.

That Leverkusen pecking order includes Javier Hernandez, Admir Mehmedi, Julian Brandt, Kevin Volland and Stefan Kiessling, making Pohjanpalo’s chances of breaking into the team almost nought, particularly after a three-month injury. Still only 22 – and with 22 senior caps for Finland – is this the perfect striker for a Premier League club to take a punt on? And would Leverkusen agree to a loan deal?

Interesting fact: Pohjanpalo rejected a three-year contract at Liverpool in 2012 after a trial at the club in order to sign for a club where first-team football was more likely.

Perfect for: Any club in the bottom half.