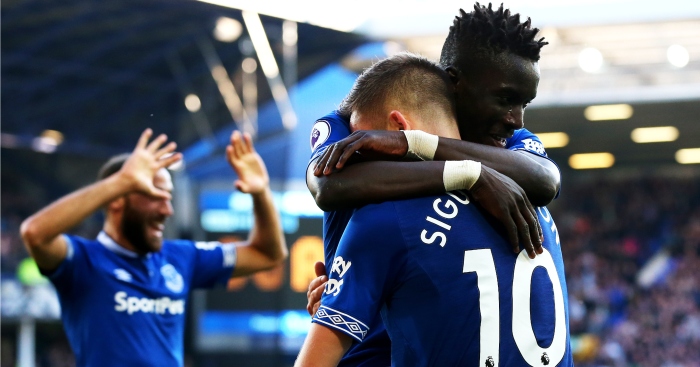 “For me, Gylfi has been trudging away outside on the left side, so play him in the position he wants to play and see what he can do,” said Sam Allardyce after a predictably dull 1-1 draw with West Brom in January. Presumably the answer was ‘not nearly enough’ as the very next game saw Gylfi Sigurdsson again jettisoned out to the left as Tom Davies was given the No. 10 role coveted by the Icelander. This time Sigurdsson provided an assist in a 2-0 win over Leicester so of course he was dropped entirely for the Toffees’ next clash, with Allardyce opting for a team consisting entirely of defenders and pacey attackers. Arsenal won 5-1.

That three-game vignette is a perfect snapshot of Sigurdsson’s first frustrating season at Everton as the £45m club record signing was shunted from left to middle to left and occasionally even to the right or the bench, producing little consistency as three different coaches gave three different sets of instructions. Allardyce was clearly exasperated by the lack of pace he inherited and Sigurdsson was never given more than two consecutive games in his favoured position; he became one-third of a punchline about Everton’s predilection for signing slow No. 10s.

Two-thirds of that punchline left in the summer, but new manager Marco Silva felt no need to replace Wayne Rooney or Davy Klaasen; he had his No. 10, underlined by Sigurdsson taking the shirt he had only ever worn for Iceland. He has now started every Premier League game in exactly the position he craves, and only David Silva has created more chances in the top flight. Not bad for a player sacrificed after 43 minutes of the opening game against Wolves when Phil Jagielka saw red.

Sigurdsson is in pretty lofty company on that list of chance creators – behind Silva but marginally ahead of Willian, Mo Salah and Eden Hazard. He is the non-Big Six interloper, just as he was at Swansea before his latest attempt to thrive outside south Wales. There have been blips (Sky Sports asked why Sigurdsson was ‘still struggling’ just last month after a sluggish performance against Huddersfield) but Saturday’s victory over Fulham was his best in an Everton shirt, with two goals, five key passes and four tackles. It’s probably the latter that most pleased Silva.

“I was happy when I came in to have one player like him. But now I am even happier as when I see one player work like he works every day… for me he is a real player. Football today is not just about quality. You need to work hard to achieve something important. Gylfi works every day, every minute for what is the best for him. I think he is an incredible example for us in our dressing room.”

That’s a beautifully pointed comment as other players have complained to the media that Silva is working the players too hard and focusing too much on tactics. Whatever Silva is doing and saying, it is working far better on Sigurdsson than his three previous Everton coaches. He is creating three chances per 90 minutes this season, his best figure since the 2011/12 loan spell at Swansea that rescued him from Hoffenheim and earned him an ill-fated move to Tottenham.

It was that spell at Tottenham – and subsequent success back at Swansea – that gave Sigurdsson the unwanted tag of a player who could only swim confidently as a big fish in a small pond. Short football memories do not recall that Sigurdsson’s signing coincided with Gareth Bale moving central or that he then had to compete with Christian Eriksen, Mousa Dembele, Lewis Holtby, Paulinho and Nacer Chadli for an attacking midfield slot, only that he looked out of his depth when not his club’s most important player.

And that theory appeared to be holding true at Everton last season, when he was just one of many players struggling to doggy paddle in a bigger, muddier pond. He was Everton’s most expensive signing and yet he looked anything but special, showing only flashes of the creative genius that had saved Swansea from relegation. Having played in a 4-3-3 with licence to move inside in south Wales, he was indeed trudging away on the left for Everton in a 4-2-3-1. Fans were unconvinced that he was worth even half the money.

Now there are few remaining doubters, especially after he reacted positively to a penalty miss against the Cottagers where once – by his own admission – he would have “crumbled”. Maybe at 29, we are finally going to see the best of a stronger, mentally tougher Sigurdsson outside of Swansea. Maybe he has finally found the right-sized pond; it helps that he has been given the go-ahead to swim right down the middle.