Home F365 Says Silence the twats: Football has a chance to be better 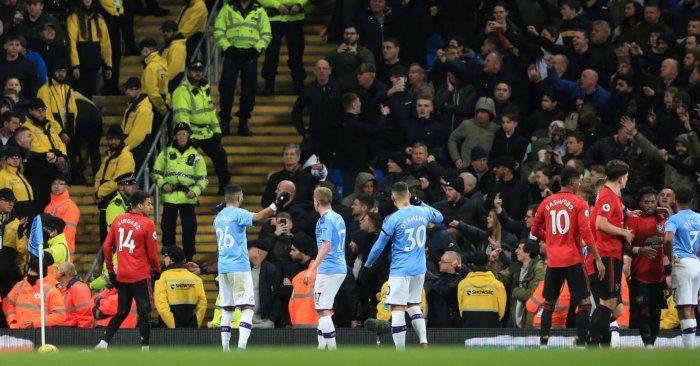 Football is brilliant. It is captivating, emotional and universally popular. It retains an ability to be breathlessly surprising, despite its many thousands of matches each having roughly the same framework. But its true magic lies in the oxymoron that it simultaneously means everything and nothing at all. For 90 minutes you can cheer and fear and sigh and cry and then…stop. Football gives us a window into our own soap opera, a manufactured story into which we can emotionally invest on a part-time basis as a break from reality.

Or at least it used to be part-time. Somewhere along the line, football began to matter too much. Or, to give the full flow chart: (1) football welcomed rampant capitalism, (2) its financial success then depended on it mattering more outside the 90-minute matches and (3) supporters were subsequently indoctrinated into thinking it mattered too much. Twenty years ago, a fan might feel guilty for caring too much about their football team; now they are more likely to feel guilty for not caring enough.

Club loyalty has created a bubble around football supporters, a siege mentality of ‘us vs. the world’. But a siege mentality has indirect effects on the psyche. It creates a mistrust of those outside of your sphere – supporters, media, opposition players. Inadvertently, your loyalty to the club becomes more important to you than the club itself. And that’s how we end up with people defending the indefensible or criticising the innocent based purely on the colour of the shirt. If everyone’s out to get you, it’s on the foot soldiers to defend the honour.

There’s a certain irony to this bubble. Football reflects life, as the oft-repeated mantra says. You do not choose your sexuality, your place of birth or your skin colour, and you don’t choose your football club either, not really. Had my Mum and Dad moved to a different city, I would probably have supported a different team. Had you or a parent or grandparent been born five, 10 or 20 miles away, or your best friend at primary school felt differently, you might easily support one of your rivals.

The inherent problem with something mattering too much is that it provokes emotional extremism. All of the recent incidents of unacceptable abuse at football matches (this weekend alone a Burnley and Manchester City supporters were ejected for racism, Wolves supporters were ejected for homophobia and Forest Green vs Scunthorpe United was suspended for supporter racism) contain the same theme: the abuse was directed at opposition players or supporters. That offers no defence for the perpetrators – someone who is racist or homophobic when they are enraged is still a racist or a homophobe – but their actions have been incited by their misguided uber-loyalty.

There are three methods – that can and must exist simultaneously – to address racism and homophobia in football. The first is to punish those responsible to the full extent of the law and ban them from attending matches. This teaches them the consequences of their abhorrent actions and sends a message to like-minded people that their views are not welcome within the game. The second is education. The 13-year-old Burnley supporter who allegedly racially abused Son Heung-Min deserves censure, but they must be taught why their actions were wrong and so must the generations that follow. Football has embraced its role as educator, using high-profile participators where possible, but it can always do more. The third method is to try and address the creep of tribalism that has drowned our fan culture; remove the stage as well as the actors.

There is nothing wrong with rivalry. Scratch that: Plenty of good lies in rivalry. Without it, football loses its point. There’s a reason why your mind and eyes drift when watching pre-season friendlies. But when your rival suffering pain pleases you more than your own team enjoying pleasure, rivalry risks being warped into a monster. And when you take a moral stance based on shirt colour rather than reason or evidence, that monster is real.

This matters more now not just because of the recent spate of detestable incidents, but because of the state of English society. Whether you will be pleased or alarmed (and by alarmed I mean standing in the shower too afraid to go out of the house and look people in the eye) by the election result on Friday morning, we are a country divided by mistrust. That long-term mistrust and division has not only been left unaddressed by politicians, but weaponised by them. Whether or not you support Boris Johnson, it cannot be denied that he used racist and homophobic language and his only punishment was to be made leader of the country. That makes a difference. It allows such language to be normalised and legitimised.

Perhaps football cannot escape this creep of division; maybe nothing can. Perhaps that is the entire intention of those fuelling it. Division does not knock on the front door, it seeps in through cracks in the walls. But football must try. We must try. If we are only discussing a minority of ignorant people ruining it for the majority, we must not let them win.

This need not be a long lament to what has been lost. English football has long contained thousands of tireless volunteers who have given up time and money to campaign for no other reason than their desire to do the right thing. On Saturday, I saw Proud and Palace and Proud Hornets meet at Vicarage Road to celebrate the work done in the fight against homophobia. Fans collect for food banks outside grounds across the country, because helping each other matters. Bradford City’s Bangla Bantams supporters group are one of many in England who work to bring minorities closer to their local clubs. Football is a wonderful means of establishing community, maybe even the best we have.

But it is now on us all to stop that community being twisted into a tribe, and to seize back football supportership and spectatorship as a positive experience before it races to the bottom. The only way to beat hatred is through kindness. Kindness stems from an ability to sympathise with someone outside of your own situation. That requires the manufactured bubble of uber-loyalty to be burst.