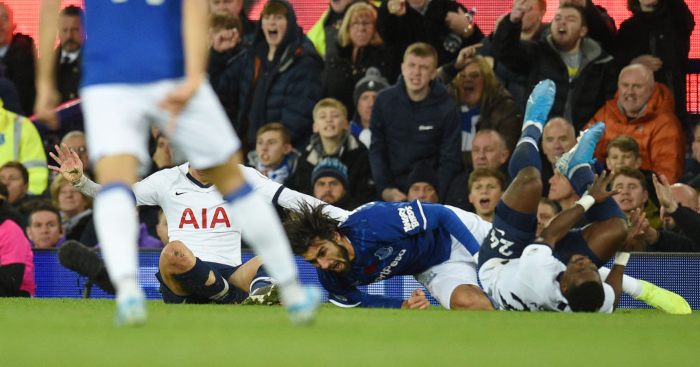 Marco Silva urges his Everton players to stick together as they wait for more news on Andre Gomes’ horrific injury after they drew 1-1 at home to Tottenham on Sunday.

Dele Alli’s first Premier League away goal since January looked like giving the visitors their first win on the road in 10 months until the Cenk Tosun’s late intervention.

But the comeback was clouded by a terrible injury to Gomes in the second half which saw Son Heung-min initially yellow-carded before being shown a red by referee Martin Atkinson.

“Andre Gomes went to the hospital,” Silva told Sky Sports. “Our medical staff is taking control of everything and soon there will be more information. We wait until it is a bit more clear.

“It is a bad moment for us as a group and as a team. It more than a football game, this is the most important thing right now. We as a group have to keep togetherness.”

On the match, Silva added: “We showed fantastic team spirit, really good. It was tough to play 15 minutes in a row because of many, many stops.

“The game to be the most honest we deserved a little bit more. The players reacted well to going behind and we showed that spirit to come back and score and we kept trying to score the second as well.”

On VAR, Silva continued: “I am 100% sure what happened there with all the moments. I don’t have doubts, I don’t know why they have to stop and take two minutes to decide. But I think it is really tough for the referee as well.

“We have to focus on the game and we have to respect the decisions of the referee and the VAR as well.”