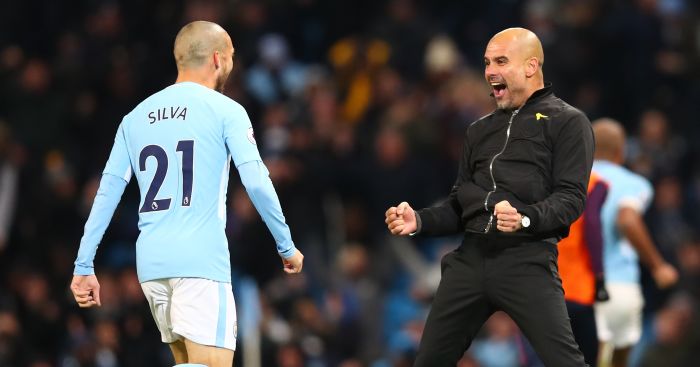 The playmaker missed several matches in the new year so that he could return home early and look after his new-born son Mateo after he became seriously ill.

And Silva has praised Guardiola for allowing him the freedom to be able to help take care of his family by missing some big matches in a City shirt.

“Guardiola made it very easy for me,” Silva told The Sun. “He said: ‘whatever you need, you can have it.’

“That’s the way he has always been. He has made a lot of big favours to me. I will always appreciate his help.

“He is more than a manager to me, he is a fantastic human being, not only because people have seen what he has done for me. He’s a fantastic person.

“When you have family and football in the same balance, sometimes you have to prioritise the family and Guardiola understood that very well.

“I am going to continue performing the same as I have been doing all this time. I give 100 per cent.

“They were very hard times, the toughest months of my life.

“It was the fear of the unknown. Everything was okay, but they said in a week’s time they didn’t know. It scared me to death.

“When you are travelling abroad to see your family, you can’t be 100 per cent concentrated on your job or profession with a problem like this. The travelling to and from Spain was a very difficult time.

“Mateo is very good at the moment and thank God everything is okay now.

“I have to keep an eye on him all the time. The doctors are doing different tests, but fingers crossed everything is okay. I am very happy and I will be 100 per cent ready for the new season.”