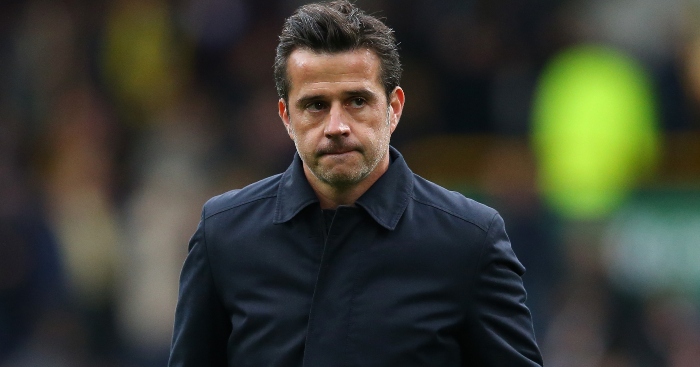 Marco Silva has warned his Everton players not to allow talk of a crisis to distract them from their task, and insisted his team are “showing character” despite their terrible start to the season.

The Toffees head for Southampton on Saturday perched just above the Premier relegation zone and with their manager under pressure following a run of results which has seen them win just once in the league since September 1.

However, the Portuguese is refusing to be bowed as he plots a path out of trouble.

Silva said: “I understand all the opinions, I understand everything as well. The main thing for us is we are talking inside about what is our goal for the next match and keeping focused on all these things.

“What’s happened with this football club and this group in the last four weeks is really strong and if you are losing focus with all the things that are happening, you don’t put the focus on what is essential for us.

“What’s essential for us is what we do here and preparing well for the games.”

It has been an eventful few weeks for Everton, who have been stung by a series of controversial decisions which have gone against them, and by the horrific injury suffered by midfielder Andre Gomes during last Sunday’s 1-1 home draw with Tottenham.

Gomes suffered a fractured dislocation of his ankle after a challenge by Son Heung-min and is facing a lengthy spell on the sidelines after surgery.

Silva’s men were trailing 1-0 at the time and went on to snatch a draw courtesy of substitute Cenk Tosun’s late equaliser, and he wants to see the same spirit again at the St Mary’s Stadium.

He said: “The team is showing reaction, it’s showing character as well, commitment to our goals as well even in a tough period within the circumstances that we have at this moment.

“It’s what I expect for the next game as well.”

Everton are likely to be without injured midfielder Fabian Delph as well as Gomes on the South Coast, where Silva is expecting a tougher test than the one Leicester got two weeks ago when they trounced their hosts 9-0.

He said: “They didn’t start in the way they wanted, for sure. The last home defeat was the toughest moment for them this season, I’m 100 per cent sure.

“They showed a good reaction against City, they competed really strongly in that game and for sure, they’ll want to do the same against us.”