Home Everton Silva on Allardyce criticism: ‘I’d listen if it was Moyes’ 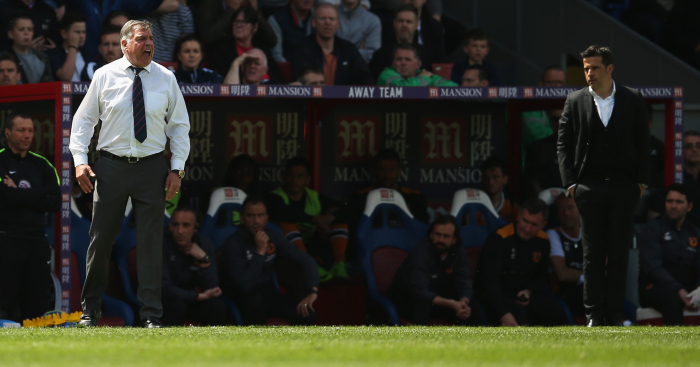 Marco Silva has hit back at Sam Allardyce‘s criticism of his Everton style, suggesting that he “would listen” if David Moyes was saying it instead.

Silva replaced Allardyce as Everton manager in the summer, becoming the club’s fourth boss in five years since Moyes’ 2013 departure.

Allardyce and Silva have clashed before, with the former laying into the Portuguese when he was being linked with the Goodison Park post, and most recently defending his own approach.

Speaking to talkSPORT, Allardyce again made a grab at relevancy by calling out the styles of Everton’s recent managers.

“You can talk about playing it out from the back and attractive football, but you will never survive, as Ronald Koeman and Roberto Martinez learned,” Allardyce said.

“They all played so-called better football than me, but they didn’t survive.”

When those comments were put to Silva, he issued a withering response.

“One thing, you have to look at whether these people they love Everton, if they want Everton really winning, if they want some stability inside the club,” he said.

“OK, if there are real Everton fans talking like that, then maybe we have to be aware and to look at it.

“But if some people don’t want good results, just instability within our club, they are not worth listening to.

“And what is important for us as a club is what is happening inside. And to be aware if the people love the club – this is the most important. Don’t be aware of what people say if they have another agenda. This is the main thing for me.

“And believe me, I didn’t read, don’t know and it is not important for me.

“OK he is one colleague, one coach as well, but I don’t know what he is saying and it really is not important.

“OK, maybe if it is David Moyes maybe I would listen because he did something really important at this club. But in this case it is not important at all.”