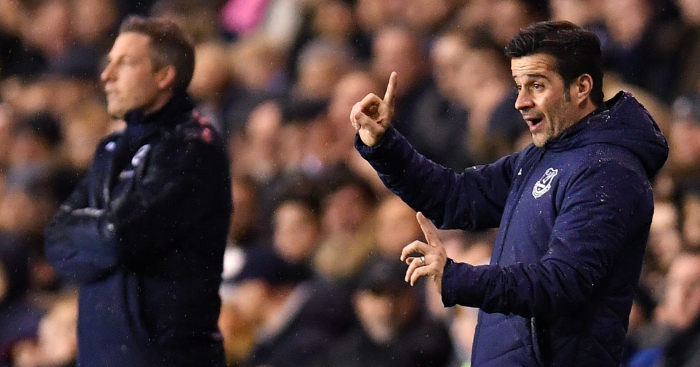 Marco Silva hit out at the inconsistent use of Video Assistant Referees (VAR) after Everton bombed out of the FA Cup 3-2 at Millwall.

Toffees boss Silva was flummoxed by Millwall’s second goal not being ruled out after Jake Cooper nudged home with his arm.

Silva insisted he has worked for “20 or 30 hours” on set pieces in training amid Everton’s inept defending, while also criticising FA Cup organisers for not implementing VAR at every match.

“Two points made the difference: we have to be more mature, taking the responsibility on the pitch, and the decision on their second goal,” said Silva.

“You can work 20 or 30 hours on the same things, set-pieces, but you have to take your responsibility onto the pitch with you.

“We knew what they would do before the match but we gave them what they wanted. And if the competition has VAR for some stadiums then it has to have it in all.

“Because it doesn’t make sense. It was a clear handball. I’m sure handball is not allowed in football.

“We had seven, eight players in the penalty area. They all see that it’s handball, so it’s really difficult that the referee cannot see that also.

“And then it’s also on the big screen, thousands of people see it there but the referee didn’t see it again.

“It was really strange in that moment. And those two moments made a big impact.

“Now we go home frustrated. You have to be fair, even with the competition, not just with Everton.”

Richarlison put Everton ahead, only for Lee Gregory to nod Millwall level on the stroke of half-time.

Cenk Tosun handed the Toffees the lead again midway through the second half but again Millwall levelled, this time through Cooper’s controversial goal.

And just when Everton were preparing to settle for a replay, up popped Wallace with the winner.