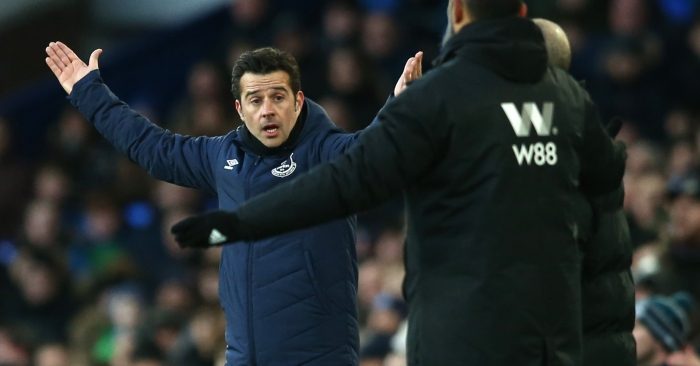 Marco Silva admits his half-time changes did nothing to improve an awful Everton performance.

The Toffees suffered their sixth Premier League defeat in nine games, with Wolves strolling to a 3-1 win at Goodison Park.

Everton have now lost three of their last four home league games, as many as they’d lost in their previous 23.

“Disappointing result for us,” Silva told the BBC. “We are giving everything to our opponents sometimes from nowhere including the penalty.

“We give easy decisions to them and we were not aggressive at all. Our mistakes were playing against us. We tried at half-time to change something but we still give the ball to the opponent and we lost the game.”

Silva swerved the opportunity to blame the officials after Wolves’ opener came from the penalty spot.

“Even if some decisions you do not understand this is something we cannot control so without the referee we need to keep playing,” he said.

“Even with the penalty, whether it is a penalty or not, it is up to us to solve this issue because when we are giving the ball away like we did, it is tough for us to understand.

“We have the conditions to do better.”

Silva understands the frustrations of the fans, with many having left before the final whistle and those who stayed letting the players know their feelings.

“I understand they expect to see a good afternoon and a good game,” he said. “They want us to achieve the position in the table and I can imagine they are not happy. We must keep fighting to improve.”