Home Liverpool Sissoko: ‘I’m not scared of Liverpool or any team’ 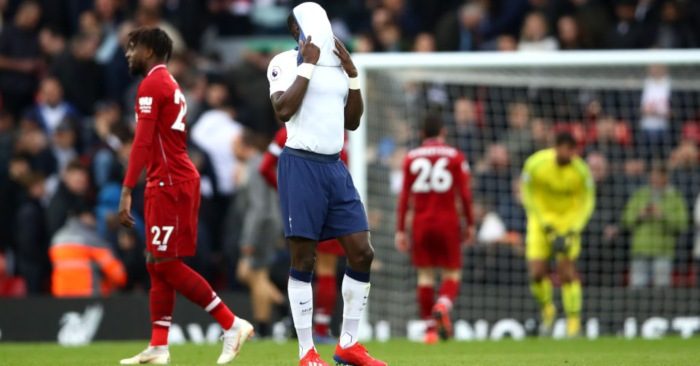 Midfielder Moussa Sissoko says Tottenham are up for the challenge the Champions League final holds against Liverpool on Saturday.

The France international says the spirit in the squad has helped them fight back numerous times this season, including their semi-final second-leg comeback from three goals down to beat Ajax.

In Monday’s pre-match press conference, he said: “The spirit is fantastic.

“Every time we were close to be out but we showed a lot of character to win the game.

“We know we can challenge against every team.”

Spurs lost 2-1 against Liverpool in their home Premier League clash back in September, and by the same scoreline in the reverse fixture two months ago.

But Sissoko remains confident ahead of the showpiece final, adding: “I am not scared of Liverpool or any team.

“We all need to challenge and we have to give our best and if we do it we can beat any team. In the past we have showed it.”

Meanwhile, Tottenham boss Mauricio Pochettino is currently enjoying his best spell in charge since taking up the position at White Hart Lane in May 2014.

Since then, the club’s new stadium has been completed and Christened on top of their successful run to the Champions League final this season.

He said: “I think this is my best period after five years.

“Today is five years of working here, I was signing a contract here, it is an amazing period.

“We have worked so hard the last three weeks, but we are excited.”

Pochettino is looking forward to “one of the biggest games in the world” ahead of the final in Madrid but he knows Spurs need to remain focused on themselves.

He added: “Along with the World Cup final, the final of the Champions League is one of the biggest games in the world.

“It is going to be a different game, we cannot prepare for a final of the Champions League on what happened a few months ago.

“It is going to be different, that is why our focus is on ourselves.”

Pochettino described Harry Kane’s fitness as a “very positive situation for him”.

The England captain has returned to full training with the group on the way back from an ankle problem.

He said: “Harry Kane, in the last week, Friday and Saturday, started to be involved in the group.

“It’s a very positive situation for him. We will wait and see how he is progressing in his problem.”

Pochettino was also positive that Harry Winks, Jan Vertonghen and Davinson Sanchez would be fit for Saturday’s clash with the Reds.

The Spurs boss added: “The four players started (training) on Friday and Saturday to be involved in the group, which is very positive to be available at the weekend and that is very good news for us.

“Tottenham deserve that we are all 100 per cent focused on the game.

“We can make history, we can provide our fans the best happiness in football.”