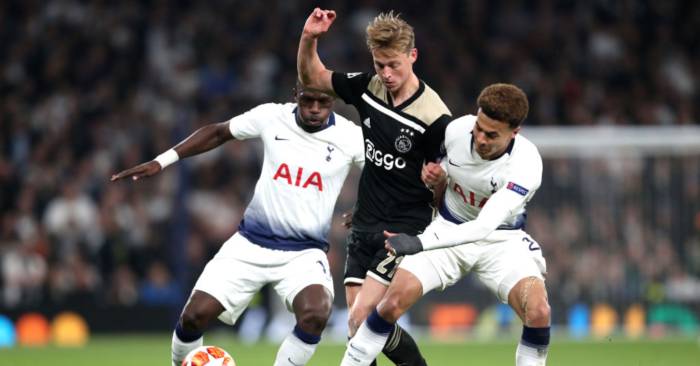 Tottenham midfielder Moussa Sissoko believes that Ajax are the perfect opposition for Tottenham in the Champions League semi-finals because they will not try to defend a 1-0 lead.

Spurs lost at home last week but there were signs that they could triumph in Amsterdam, with Sissoko remaining buoyant ahead of Wednesday’s second leg.

“I think the good thing is Ajax is a team that likes to play. I don’t think they will stick together at the back, sit at the back and only try to defend,” said Sissoko.

“If we can score two goals away, we know it is going to be difficult for them. We have to make sure we score the first goal, not concede and after we will see what happens.”

The bad news for Tottenham is that they used an awful lot of energy on Saturday, when they lost 1-0 to Brighton with nine men.

Despite that defeat, they have almost secured a Champions League place as Arsenal and Manchester United both dropped points on Sunday.

“We have to believe in ourselves because we can do it. It won’t be an easy game because Ajax is a good team. They play good football but we have a chance.

“It is not every week you can play this kind of game. Of course we lost 1-0 at home, but it is not over. Even away we still have a chance to win and we have to believe in ourselves.

“That is what we will try to do and now we need to have some rest, some recovery and do everything to go to Amsterdam and come back with the qualification.”