The overlooked Premier League stars who have a right to feel hard done by. 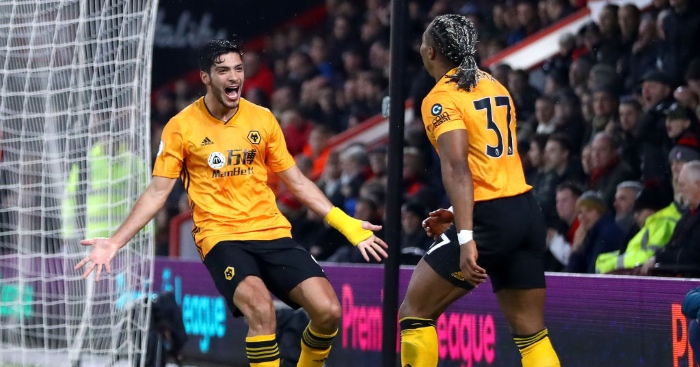 Three Liverpool players have been named among the nominees for the Premier League’s Player of the Season award. Trent Alexander-Arnold, Sadio Mane and Jordan Henderson join Kevin De Bruyne, Danny Ings and Nick Pope as the six vying for the gong. The definitive best player may be pipped by one of the Reds, but that’s not interesting. Instead, we’ve taken a look at six overlooked Premier League stars – outside of the top six – who have a right to feel a little hard done by.

Raul Jimenez (Wolves)
Raul Jimenez has been the greatest leader of any attack in the Premier League this season. He has started 37 of Wolves’ 38 games, scoring 17 goals and providing six assists. His movement off the ball is second to none and his work-rate is phenomenal; his finishing is astonishing in its accuracy, variety and beauty. His partnership with Adama Traore is one that no-one – except fans of clubs vying for either player’s signature – wants to see broken. Speaking of which…

Adama Traore (Wolves)
Rapid, muscular and now slippery, Adama Traore would win the most improved player of the season at a canter. Exuberant inconsistency has been replaced by frightening dependability. He scored four goals and provided nine assists in the Premier League, but the chaos he creates and the focus he draws from opposition defences is worth far more than those goal contributions.

This pic is amazing.

A member of the Wolves coaching staff applies baby oil to Adama Traoré’s arms to make it harder for defenders to grab him. pic.twitter.com/hYxhdMiwZ9

Jack Grealish (Aston Villa)
How much is Premier League survival worth? Aston Villa would have been down by Christmas without Jack Grealish. The statistics are remarkable. He scored the most goals for Villa (8), provided the most assists (6), completed the most dribbles per 90 (2), and was somehow the most creative passer of the ball (2.5 key passes per 90) and the most accurate (85% pass completion). He is a supremely talented footballer with an outstanding attitude and needs to be playing Champions League football. Villa will be utterly screwed without him.

Michail Antonio (West Ham)
His technical ability is often unfairly ignored, such is the conspicuousness of his pace and power, but his control of the ball and capacity to turn in tight spots has improved dramatically. Before the Premier League hiatus, the only thing missing from Antonio’s game were the goals that came in a flourish in July. He found the net eight times in West Ham’s last seven games to keep them in the top flight. David Moyes may now have ripped up his list of striker targets, assuming they can rebuff the approaches that must surely be coming in for their top man.

Allan Saint-Maximin (Newcastle)
The Frenchman was set to be one of very few Newcastle players to retain their place in the first team alongside Kylian Mbappe, Neymar and the rest of the Saudi-funded revolutionaries. But with the takeover falling through, Saint-Maximin will be the diamond in the rough on Tyneside once again next season. His jittery, dynamic dribbling is a joy to watch and his clear delight simply to be playing football for a living is wonderful to see amid the dour expressions worn on the faces of far too many professionals. But don’t confuse the smile on his face with a lack of commitment or desire; he has improved throughout a very impressive debut Premier League campaign. There is more to come.

Pierre-Emerick Aubameyang (Arsenal)
29 goals in 44 appearances this season; 70 in 109 in his whole Arsenal career. Mikel Arteta and the Gunners will really struggle if they can’t tie him down to a new deal. The problem they have is that he would improve almost every team in world football; there must be a fair few in contact. His winner against Chelsea in the FA Cup final was the perfect example of his proficiency as a striker. Faking to shoot with his right, sweeping the ball on to his weaker side, before picking and executing the perfect dinked finish. It would take more than 100 years worth of salary of the now 55 redundant staff members to replace him, otherwise known as £100million.