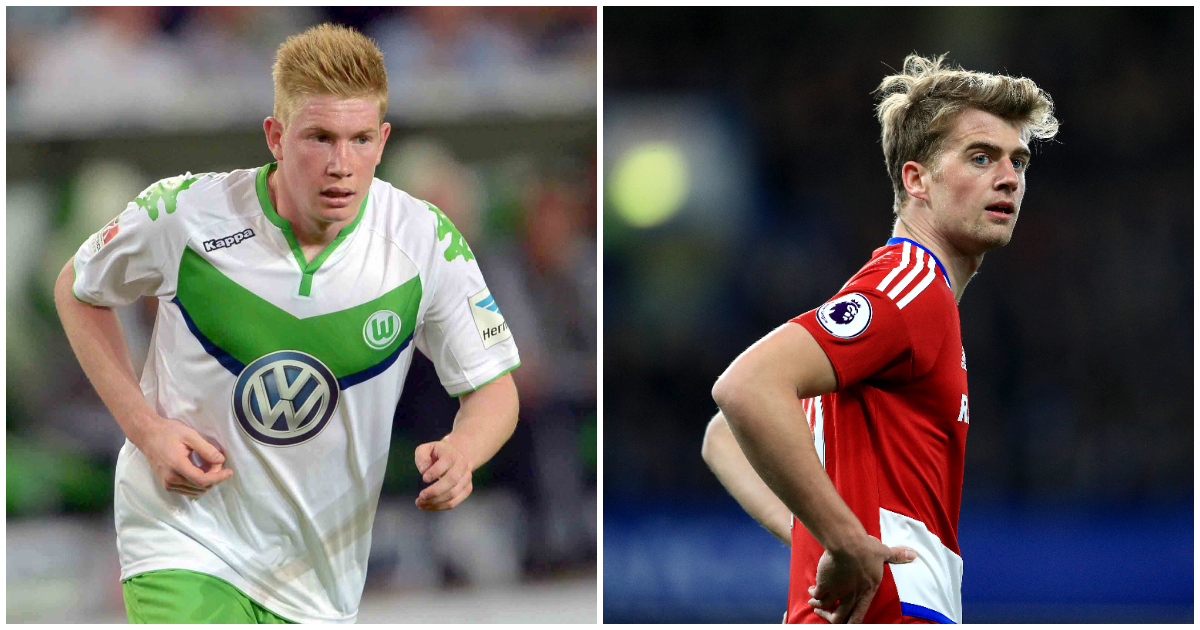 Sometimes when a player seems like they are at a standstill in their career, or perhaps on a sharp decline, they can be saved by a club they fit like hand in glove. Here are six times a transfer saved a career from drowning…

Patrick Bamford – Middlesbrough to Leeds
Signed by Chelsea in 2012 from Nottingham Forest for around £1.6m, Patrick Bamford was employed by the Stamford Bridge club for five years. He made a grand total of zero appearances for his longest-serving club’s first team while fighting in Chelsea’s loan army, temporarily joining six other clubs.

Bamford found his feet after permanently leaving Chelsea in January 2017, joining Middlesbrough after spending the first half of his season kicking his heels on loan at Burnley, a posh fish out of water. He did well at Boro but their intriguing squad was not equipped for the top flight; Alvaro Negredo, Adama Traore, Victor Valdes, Viktor Fischer and Martin de Roon all repped the red that year as they were relegated from the Premier League, finishing 12 points behind Watford in 17th. Boro have not been back in the top flight since.

The now-Leeds striker scored just one PL goal in the 2016/17 season in 14 appearances, but he was often played on the right wing to accommodate Negredo. The following season he bagged 14 times in the second tier, scoring a hat-trick against his current club in February 2018. That summer, Leeds came calling…

He impressed in his debut season at Elland Road, but suffered badly with injuries. The next season, however, was a big one for Bamford. The Whites won promotion back to the PL, and he scored 16 league goals for Marcelo Bielsa’s side. Could he cut it in the big league? That was the question.

In short, yes. Leeds and Bielsa saved him from becoming an average, capless, Championship striker, and turned him into a clinical finisher with a brilliant all-round game. The 28-year-old nearly made the England squad for Euro 2020 after scoring 17 goals in his first season with Leeds in the big league, and he was called up by Gareth Southgate for his first post-tournament squad. What a turnaround and what a gentleman.

Henrikh Mkhitaryan – Arsenal to Roma
Mkhitaryan wasn’t just saved from Arsenal by Roma, but from the Premier League. He had a disappointing time in England after lighting up the Bundesliga after his move from Shakhtar Donetsk to Borussia Dortmund in 2013. He contributed to 90 goals in 140 games for Dortmund and was snapped up by Manchester United for a fee in the region of £38m in 2016 following his 20-assist Bundesliga season. Anyone else getting a Jadon Sancho vibe here?

Armenia’s greatest ever player played 63 times for the Red Devils, scoring on 13 occasions – including a terrific scorpion kick against Sunderland (that was offside, by the way). He actually scored in a Europa League final under Jose Mourinho, and was quite good in spells for United. But his performances in the PL were not cutting the mustard and he fell out of favour in the league under Mourinho.

Now, let’s talk about that transfer to Arsenal. Mkhitaryan was involved in a straight swap deal with Arsenal superstar Alexis Sanchez. We all know it was a disaster – especially for Alexis – and nobody seemed to know if the Armenian had any say in the deal. His time at the Emirates was a little strange. His debut was a loss to Swansea City, but in his next match he assisted three goals – a playmaker’s hat-trick – in Pierre-Emerick Aubameyang’s debut for the club. The next season, he missed the Europa League final as it was held in Azerbaijan, and they don’t like Armenian folk over there. That just about sums up his career in England.

His Roma renaissance has been terrific to see. Now managed by Mourinho again, he is one of the first names on the team sheet. Last season the 32-year-old scored 13 and assisted 11 in 34 Serie A games, and looks like the player that once lit up in the Bundesliga.

Kevin De Bruyne – Chelsea to Wolfsburg
Instead of taking you down memory lane, let’s fast-forward to the part where Robbie Savage said he “wouldn’t pay to watch De Bruyne” following his £68m transfer to Manchester City in 2015. Yeah, you probably missed the mark on that one, Robbie.

Right, onto his early career woes. De Bruyne was a Chelsea player and did not get much of a chance to impress at Stamford Bridge. More of a chance than Bamford, but hardly. But in classic Blues fashion, they managed to get nearly £20m for the midfielder from Wolfsburg in January 2014 after a decent spell on loan at Werder Bremen. De Bruyne made nine appearances for Chelsea, three of which came in the PL, and he never looked like taking off in west London.

But he did take off during his second stint in Germany, his first on a permanent basis. His first full season was okay – he assisted 21 times in the Bundesliga, even saving some chances for himself when bagging ten league goals. Wolfsburg finished second, improving on their fifth-place finish the season prior. De Bruyne had done his work, provided his service for Wolfsburg, and was off to Man City in the summer of 2015. He’s been quite good for them. I wonder what a certain ex-Derby County captain thinks…

Memphis Depay – Man Utd to Lyon
From providing the most pathetic headed pass back to a goalkeeper you’ll ever see for United, to essentially being Lionel Messi’s replacement at Barcelona; Depay has had a rollercoaster of a career.

The 27-year-old forward was excellent for PSV as a young player, and quite rightly earned a transfer to the Premier League. A youngster joining a club the size of Manchester United for over £30m can really make or break a player. It probably should have broken Memphis, but he strikes me as a player with a strong mentality who probably doesn’t care about any negative comments. He made 53 appearances for the Red Devils and only scored seven times. Minutes were hard to come by as he quickly fell down the pecking order under his compatriot, Louis van Gaal, and then the aforementioned Mourinho.

The Holland international had little choice but to release himself from the Old Trafford shackles and get the hell out of there. The English giants cut their losses and sold him to Lyon in a £14m transfer. Although the Ligue 1 outfit lost Depay for nothing four years later, it’s still the best £14m they’ve spent in a very long time.

The former PSV man made 178 appearances for Lyon, scoring 76 and assisting 55. He is debatably the main man at the Nou Camp now and has 70 international caps, nearly averaging a goal every two games for his country. Maybe there is just a post-Cristiano Ronaldo No. 7 shirt curse at United?

Mohamed Salah – Chelsea to Roma
Another Chelsea transfer, another player not given a fair shot at Stamford Bridge, and another transfer where Roma saved the day, and a career. Salah was brought to Stamford Bridge in 2014, two months after scoring the only goal in a Champions League match against the Blues for FC Basel.

Salah scored two goals for the west Londoners, one of which came in Arsene Wenger’s 1000th match in charge of Arsenal as they battered the Gunners 6-0. Minutes under Mourinho were scarce, and he was ineligible for the CL after initially signing for the Blues. 14/15 was very rough for the Egyptian as he was limited to three league appearances, featuring for a total of 30 minutes. A loan to Fiorentina was just what the doctor ordered, and he was able to show his employers why they signed him in the first place.

The Egypt international scored six in 16 for Fiorentina, and helped them reach the Europa League semi-final. He also scored a brace against Juventus in the Italian Cup semis. Roma liked what they saw from Salah during his six months in Italy and took him off Chelsea’s hands for a measly £13.5m. He scored 14 goals in 34 Serie A matches in his maiden campaign at the Stadio Olimpico.

Salah’s second season was even better, bagging 19 goals in all competitions, as well as providing 15 assists. His 16/17 campaign was enough to make Liverpool splash the cash, bringing the player back to England in a £38m transfer. He scored 44 goals and provided 16 assists in his debut season at Anfield, before winning the Champions League next term, and then the club’s first-ever PL title a year later. He has recently joined the 100-goal club in the PL, and has started this campaign in relentless fashion, striking in five of his six league games so far.

Gerard Pique – Man Utd to Barcelona
Pique’s time at Old Trafford was very forgettable, there is no denying that. He was a Man Utd player for four years – joining from La Masia – and raked up 23 appearances for the Red Devils, which is 549 (and counting) fewer appearances than he has made for Barca. Pique spent a year on loan at Real Zaragoza, playing more games for them in a single season than he did in his whole time at United.

Wayne Rooney said Pique wasn’t physical enough for English football, noting that he struggled against the likes of Bolton Wanderers – who were excellent once upon a time, but very combative. “He was young and got bullied there and I think that’s when Fergie decided that, physically, he wasn’t right for the Premier League,” Rooney said.

The 34-year-old is now a Barca and Spain legend, and he became the player he is today (or once was) thanks to his transfer to the Nou Camp in 2008. He was thrown straight into the starting XI by Pep Guardiola, and played 45 times in his maiden campaign. He also won the Champions League final against his former club, which must have felt bloody amazing. His first season as a senior Barca player was pretty much perfect for Pique, he also earned his first Spain cap in February 2009 (against England), and now has 103 in total for La Roja.