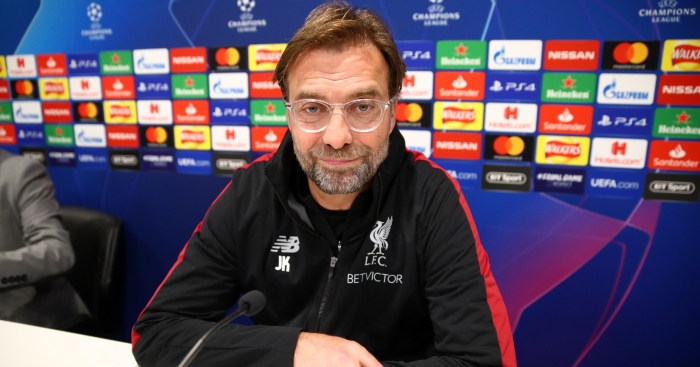 Jurgen Klopp returned to an old favourite to partly excuse his Liverpool side’s sluggish performance in the derby draw at Everton. What can he be expected to do when it is “coming from all directions”?

This is not the first time he has given a questionable explanation for a poor result, of course. Here are some of his classics…

After the FA Cup defeat to Wolves at Molineux in January, when Klopp made nine changes to his side, the Liverpool boss apportioned some of the responsibility for defeat to the blowy conditions. “The wind didn’t help, players struggled to control the ball… It wasn’t a nice game for the young boys.”

It is a familiar theme with Klopp, one which cropped up after a League Cup semi-final defeat to Southampton in 2017, and he explained his wariness in more detail just two months after he arrived at Liverpool in October 2015.

“The English game is not faster than the German game. Perhaps there are a few more sprints. But there is a different style of football here, partially due to the weather. The wind can be quite extreme in England. We are not familiar with that in Germany and you have to keep things simple. Players who are not from the UK have to get used to the winds. I have to adapt my style of football as a result as well. Often, you are forced to keep things simple. And there are a lot more duels for the second ball here, and more duels in general. That makes the game even more intense.”

Sorry about the wind Liverpool! #MyBad

Snow
Liverpool came under fire in January after a result which Jose Mourinho feels might have decided the title. At half-time during the home draw with Leicester, their groundstaff cleared snow from the end which the Reds were attacking, leaving the other end relatively untouched.

Klopp explained that “there was not enough man power to clear all the pitch” and, in any case, if it was a ploy, it wasn’t a clever one. When you already have one of the best defensive units in the game, why leave the area they are patrolling more hazardous and unpredictable?

After a 1-1 draw, Klopp pinpointed the conditions as one of the reasons for his team’s tepid performance.

“You saw that the ball didn’t roll really. If you then have the ball pretty much for 70 to 80 percent of the time it makes life really uncomfortable. The only problem is if it stays on the pitch and that was actually the case.”

Not at one end, Jurgen…

Wouldn’t the snow help Leicester play Vardy in behind as the ball will hold up for him to run on to?

Sun
Seemingly, Klopp is only happy when it rains. The sunshine evidently doesn’t do it for him either.

Towards the end of last season, Liverpool chucked in a two-goal lead at all-but-relegated West Brom, who staged what the German termed a “useless comeback”.

“I don’t think that point will help West Brom massively, it is a complete waste of points. They don’t need it, we would have needed it,” he said, later admitting he was speaking “rubbish”.

But not only did West Brom have the temerity to not roll over and have their bellies tickled at the time, they were also accused of not preparing their pitch specifically to Klopp’s liking. On a warm Saturday afternoon, they opted not to water the pitch at half-time, the heathens.

“It was a difficult game, especially after the pitch got drier and drier. We had the ball constantly and it’s not so easy. It was quite difficult. I was not happy with the pitch. You never played football, obviously. It makes a massive difference. If you’re like West Brom, the ball constantly in the air, you don’t need a wet pitch. That’s how it is and we have to deal with that. They can do it next year, playing with a dry pitch in the Championship.”

A year previously, though, after a goalless draw at home to Southampton, Klopp claimed watering the Anfield pitch was of little use.

“Today, I know nobody wants to hear it but I’m brave enough to say it, the pitch was really dry. We gave it all the water we had but after 15 minutes it was really dry, because of the wind, it was difficult.”

“The mix-up of intensity in training, very warm weather and a very dry pitch is not the best preparation for a football game. Making the right decisions when you are really tired, when it is really warm and the ball is not really rolling is very difficult.”

Television
Klopp came up with another imaginative excuse after another miserable result against West Brom last year.

“What I heard was that the actual extra time in the first half should have been ten minutes,” he said after being dumped out of the FA Cup by the Baggies. “It was only four.

“I heard that television said it’s not longer than four minutes. Of course that;s not possible, you can’t cut match time because there is something else to broadcast. I don’t know what was on afterwards, maybe the news or something. It was ten minutes and so you need to play ten minutes longer. You can’t say: ‘It’s now a little bit too long.'”

I directed the match and I can categorically state that at no point did I (can add ‘have I’ or ‘would I’ to that) ever try to influence the officials, including the allocation of stoppage time. Not only would it be unprofessional, it would also be utterly futile. https://t.co/GD7SfOVn66

Officials
Klopp got his knickers in a twist over the performance of Kevin Friend and his assistants during the February draw at West Ham – when Liverpool scored an offside goal and failed to take a similarly-offside chance late on to secure an undeserved win.

“We had good moments and we score the goal which was offside… the referee must know that at half-time. It explains the second half because I think the referee knew and you saw there were a lot of strange situations, not decisive, just rhythm breakers. There were so many situations where it was 50-50 or 60-40 but it became a free kick for the other team.”

His on-pitch outburst cost Klopp an £8,000 fine and prompted Manuel Pellegrini to finally say something interesting.

Jurgen Klopp joins us post-match to chat about Manuel Pellegrini and tonight's referee.

Injuries… to opponents
If it’s not referees breaking up Liverpool’s rhythm, it is their opponents hurting themselves.

After being held by a Manchester United side that lost three players inside the opening 43 minutes and finished without four of Ole Gunnar Solskjaer’s first-choice front six, Klopp suggested the Red Devils’ injuries hurt Liverpool almost as much.

“It’s difficult. It was a strange game. We started really, really well, exactly as we wanted to start. Then the injury crisis started as well. That obviously cost us our rhythm. It was like: ‘What’s going on now?’ “United played with a completely new midfield, pretty much a new three up front. We lost the rhythm and couldn’t get it back.”

As a means of stopping Liverpool, ‘pulling hamstrings’ isn’t a method that had been tried before. Solskjaer really is a football genius.