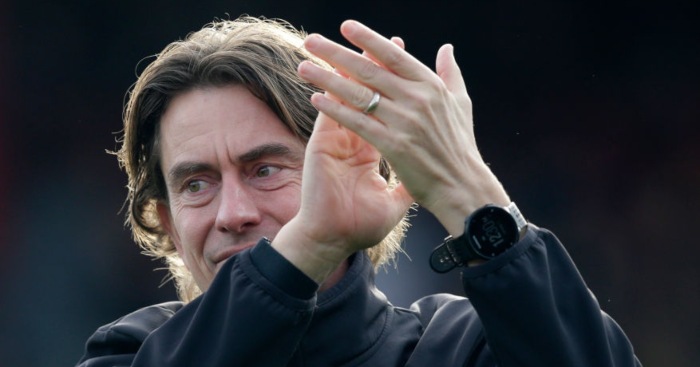 No Marcelo Bielsa? No Slaven Bilic? We choose six managers from the lower leagues who are doing rather better than most expected…

Thomas Frank (Brentford)
The first name on this list is one few fans in October would have believed was an EFL manager in any guise, let alone receiving plaudits left, right and centre like the busy Bee he has become.

Promotion has been a long time coming for Brentford, one of just a handful of Championship clubs not to have plied their trade in the Premier League, but given the Griffin Park outfit’s farewell season to their current stadium came amid a backdrop of losing their top scorer in Neal Maupay and first-choice centre-back Ezri Konsa among a host of other important squad members, a poor start to the current campaign saw Frank’s head nearly on the west London chopping block.

That this season was expected in many quarters to be the culmination of over half a decade’s work matters not, Frank has had to overcome doubts from the off after winning just one of his opening ten matches. Even more recently, the start of the 2019/20 season saw the Bees win just one of their opening six matches in all competitions.

Fast-forward to the New Year though, and the Dane has guided the Londoners to just six points off the automatic spots, behind only the faltering Leeds United and West Brom, while playing the most scintillating football the Championship has perhaps ever seen.

Gary Rowett (Millwall)
The man on this list who has been at his club the shortest period of time is perennial Midlands manager Rowett, whose move to London has brought with it a renewed vigour for life, as well as a healthy bout of victories. Rowett was clearly living off his harsh dismissal at Birmingham City through damp squibs at near-neighbours Derby County and Stoke City, each reign lasting less than 12 wholly unsuccessful months. So a mid-season appointment in the capital could have put paid to a managerial career which began with such promise at Burton Albion and the Blues.

But instead, Rowett is exceeding expectations, not just with Millwall – who were 17th and in danger of a relegation battle before his January appointment – but with his own recent reputation.

The Lions are within touching distance of a play-off place, and in this season of few front-runners, a first ever sojourn in the Premier League is not off the cards for both club and manager

Lee Bowyer (Charlton Athletic)
The fact that Charlton Athletic are not bottom of the Championship is enough to warrant Addicks manager Lee Bowyer a spot on this list. Superb early season form has allowed the Valley-based outfit to avoid plateauing below the dotted relegation line despite an injury list in the double figures forcing players to be recalled from loan spells as far down as the National League South. And all this in the midst of rogue ownership only just recently moved on from the south London club.

Former player Bowyer has gone from contract limbo in the summer despite guiding the club to unlikely promotion from the third tier to being offered a new five year deal. If that isn’t a sign of how much Bowyer and his band of merry men are overachieving, then the fact that keeping this depleted squad higher in the league table than recently relegated Huddersfield Town and one of the most expensive and highest-paid teams in Stoke City past the halfway stage certainly is.

If Bowyer guides Charlton to 21st place or higher come May, the Manager of the Season Award should be in the first-class post to SE7.

Alex Neil (Preston North End)
His may be a team made up of seemingly nobodies, but this posse have banded together to make one hell of a home force for the majority of the campaign to this point.

Alex Neil’s Lilywhites are enduring by far their worst run of the campaign so far – without a win since mid-December – but even such a run has seen the Lancashire outfit sit tenth and just two points off a play-off spot.

With one of the lowest wage bills in the entire division and a place outside the top six being considered a disappointment, a return to form will surely follow after the arrival of Scott Sinclair and the end of a packed festive schedule that stretches the smallest of squads.

The Scot may have had offers from bigger and richer clubs, but his eye for developing raw talent and still making the most of a 4-2-3-1 formation shows just how important Neil is to Preston, and vice versa.

Gareth Ainsworth (Wycombe)
Does anyone else remember that season Gary Johnson inexplicably and remarkably guided Yeovil Town – now of the National League – to the Championship? If you do, you will probably be feeling a slight sense of deja vu when looking at Wycombe Wanderers’ season so far.

Gareth Ainsworth may be one of the youngest names on this list, but he has been at his current club by far the longest, his time on the Adams Park touchline almost enough to warrant a finely dressed and remarkably hairlined testimonial all of its own.

But it isn’t just Ainsworth’s style and swagger off the pitch that is earning him and his side plaudits this year. In a League One campaign which was expected to be dominated by the pre-season holy trinity predictions of Sunderland, Portsmouth and Ipswich Town, with Peterborough and Rotherham expected to play supporting roles, that the Wanderers have been top of the third-tier tree far longer than any other side this season shows everything that this Wycombe side represents.

And that’s the perfect blend of youthful exuberance and experienced heads in the guise of David Wheeler and Adebayo Akinfenwa, all moulded in the vision of a manager who need not look for pastures new to taste Championship football.

Michael Duff (Cheltenham Town)
We end on a managerial novice looking to make as great under-the-radar strides as a manager as he did a player. Former Robins and Burnley centre-back Duff’s managerial career may well take similar shape to his playing days should his current employers’ and former Claret employers’ trajectories continue as they are.

On a restricted budget and in his first full season, Duff has helped Cheltenham to third place in League Two, with EFL journeyman Luke Varney leading the line alongside just a handful of other players to have played regularly above the fourth tier of English football prior to arriving at Whaddon Road.

Having managed a respectable 16th-place finish last time out, few expected much better from the Gloucestershire outfit this time around. However, only two teams have outscored Duff’s Cheltenham while they – perhaps unsurprisingly, given their manager’s heady days as a centre-back – have conceded by far the fewest goals across the division.

Atop a pack of teams fighting out for the third and final automatic promotion place, this outstanding goal difference could pay dividends in Duff and Cheltenham’s wish for League One football. Should that happen, an immediate promotion to Burnley’s first-team manager wouldn’t be the strangest thing to happen this decade.