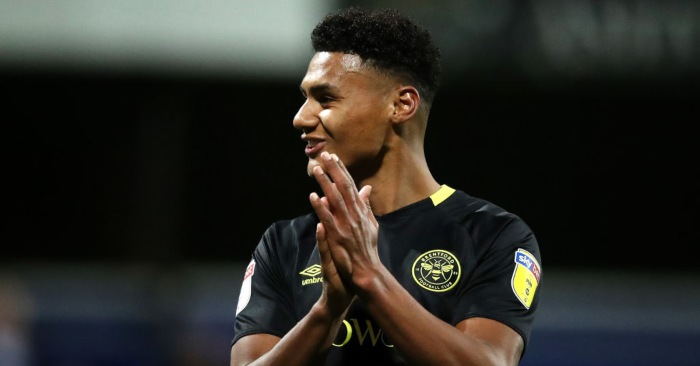 According to our EFL expert, these guys are ready for Premier League transfers…

Ollie Watkins (Brentford)
Brentford’s lacklustre start to the season paid incredible dividends for winger-cum-striker-cum-hotshot elite finisher Watkins, who made the Bees a near-one-man team in the opening months of the campaign.

With 17 goals at the halfway point of the season and a further three assists to his name, the former Exeter City forward looks set to become the latest in a long line of Griffin Park youngsters to progress to the Premier League.

That west London pedigree which has seen the likes of Andre Gray and Neal Maupay survive if not thrive in the top tier means that any side struggling for goals (we’re looking at you, Crystal Palace and Sheffield United) should be making serious inquiries for the 24-year-old.

Now, as a forward line consisting of Said Benrahma and Bryan Mbuemo is finding its groove, and with Brentford the best of the rest in the second tier (I knew it would happen), Watkins is proving to be just as important as he was in the opening games of the season. The fact that he is now part of a finely oiled machine rather than the sole working cog need not detract suitors. This is a man destined for the top via a Premier League stepping stone.

Semi Ajayi (West Brom)
Nigerian defender Ajayi has made a name for himself since being let go by Cardiff City three years ago. A low-key switch to an already-almost-relegated Rotherham United was not the easy choice for the versatile defender, but having established himself as a first-choice centre-back in League One before a switch to holding midfield in a 4-1-4-1 system, the 26-year-old has shown incredible versatility and an eye for goals with seven for the relegated Millers last term.

A summer switch to promotion favourites West Brom has seen the Nigeria international return to his more familiar position at the heart of defence, and while the Baggies are without a home clean sheet so far this campaign, Ajayi has done more than enough to show he should be could be playing in the top flight later this month, never mind next season.

Prone to an error, those kinks have slowly been ironed out by Paul Warne at Rotherham and now West Brom head coach Slaven Bilic, so much so that Ajayi has the ability to leave fans with hearts in mouths and mouths open in awe of his brillianc,e all in the space of a Cruyff turn on the edge of his own penalty area.

Norwich City and AFC Bournemouth are both crying out for defensive reinforcements and while Ajayi would cost a pretty penny having only moved to the Hawthorns in the summer, his would be a signing that would improve many relegation-threatened defences and provide threat from set pieces.

Matty Cash (Nottingham Forest)
Early on his Nottingham Forest career, midfielder Cash looked like being a big-money signing for any one of many Premier League sides, before seeing his career stagnate somewhat before the arrival of current Forest chief Sabri Lamouchi.

Injuries to Tendayi Darikwa and Carl Jenkinson meant Cash’s athleticism and stature was afforded an opportunity in the right-back slot, and he has not yet looked back. The makeshift-and-do positional swap now looks something of a masterstroke, prompting discussions of international call-ups to the Poland squad and admiring glances from many a top-tier side.

Sheffield United and Wolves could both do with competition at right wing-back, while he would even improve the defensive options at Tottenham Hotspur and Arsenal.

Ebere Eze (QPR)
One of the brightest young sparks of this Championship season has been perhaps the most exceptional part of QPR’s quite remarkable attack. Loanees Jordan Hugill and Nakhi Wells may have been getting the lion’s share of the goals, while winger Bright Osayi-Samuel adds the razzle and dazzle, but it is Eze who does the hard part: tying it all together.

Scoring at a rate of nearly a goal every other game and always looking capable of a moment of magic, the Nigerian forward is most adept playing behind an out-and-out striker in a traditional number 10 role, and would make an excellent January acquisition for the likes of Aston Villa, Tottenham and even Manchester United, given the Red Devils’ recent penchant for making first-teamers out of Championship stars.

Given the fact that unlike many players on this list, Eze’s club have little chance of promotion this year despite the 6-1 win over equally mid-table Cardiff City in which the 21-year-old starred, it shouldn’t be too difficult to see Eze’s head turned by the prospect of immediate top-flight football.

Jarrod Bowen (Hull City)
He was always going to be somewhere on this list. Like Eze, Bowen has little chance of Premier League football in the near future with current employers Hull City, but even more chance of playing in the top flight for the second half of this campaign. A meaty 22 goal involvements at the half-way point of the season has the likes of Bournemouth, Newcastle and Aston Villa interested.

In truth, there are very few Premier League outfits who can afford to let the 23-year-old pass. Title ‘challengers’ Leicester City would be an excellent fit given their alternative use of forwards Ayoze Perez and Kelechi Iheanacho, and Bowen’s supreme goal return from the wing.

Liverpool could do with the attacking reinforcements but in his prime, weekly football is key. Everton or Southampton would meet both his demands for first-team football and near-guaranteed Premier League status, while providing either club with the satisfaction of a regular goal-getter.

Tariqe Fosu (Oxford United)
One from League One now, and an attacking midfielder who has shone against many an esteemed opponent already this season. The tenacious winger has a goal involvement every other game in the league and scored three times in Oxford United’s quarter-final EFL Cup run, including the 4-0 demolition of West Ham United.

Having elected to leave promoted Charlton Athletic to stay in League One with promotion challengers Oxford, the 24-year-old looks to have done his long-term career prospects a favour, with many relegation-threatened clubs needing a player capable of his end product and tenacity, as well as his no-holds-barred approach to the game.

Norwich, Bournemouth, Aston Villa and Watford should all be interested in a player who can offer excitement and goals as a squad option, while reserving a spot as a key player in the Championship should survival not be achieved come May.