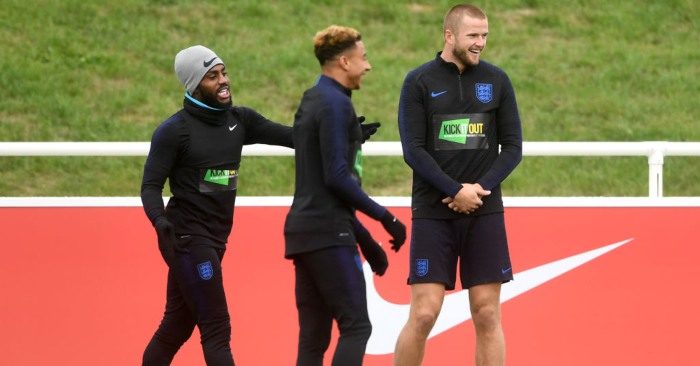 This sextet (oooh) were all in England’s squad for this summer’s Nations League finals. At least half of them should not be in Gareth Southgate’s latest squad for European qualifiers against Bulgaria and Kosovo…

Johnson scores their first attack – and this is not one Jack Butland will want to see again. 🙈 pic.twitter.com/9xOQQJnT3O

…after which he was dropped for Stoke’s fifth game of the league season against Leeds. A 3-0 defeat suggested that Butland was not the only problem at Stoke.

…though the penalty shoot-out gave him a precious chance to redeem himself. He took that chance.

“For the first time in a few weeks my mistake hasn’t completely cost us and it makes me feel a lot better,” said Butland.

Losing his England place to either Dean Henderson or Nick Pope might just kill that buzz.

Danny Rose
‘He’s finished,’ said Seb Stafford-Bloor on Wednesday morning when discussing Tottenham left-back Danny Rose, who has started three Premier League games this season but has been largely awful. Don’t trust Seb alone; one London site has rated his three performances at 6/10, 6/10 and 4/10 for a terrible 88 minutes against Newcastle United on Sunday. The consensus on Twitter among Tottenham fans is that they would happily wave goodbye to the Yorkshireman right now.

Ben Davies is better than Danny Rose, time to stick our heads out of the backside of Rose.

The saving grace for Rose when it comes to England is that Ben Chilwell has been injured and Luke Shaw has been ruled out for the next month. He probably retains his place by default, unless Ryan Bertrand gets an unlikely recall or Solly March has made one hell of an impression as a wing-back.

Joe Gomez
Let’s face it, Joe Gomez will be in Southgate’s England squad regardless – assuming John Stones is fit, it seems likely that he will stick to the quartet of Stones, Harry Maguire, Gomez and Michael Keane – but the truth is that he is not in Jurgen Klopp’s current first-choice XI at Liverpool. He has been a slight victim of his own versatility, having moved out to right-back in the UEFA Super Cup final when the Reds wanted more solidity down that side. But that reunited Joel Matip and Virgil van Dijk in the centre of defence (and they really are excellent together), which in turn left Gomez in the cold.

I adore Joe Gomez but Joel Matip is an undisputed started at this point, he’s looked absolutely unreal alongside Virg since the run-in last season. If it’s not broken, don’t fix it – Gomez’s chance will come.

Right now, it has to be ‘Harry Maguire plus one’ for England, and the ‘one’ should not be Gomez unless he is actually playing for his club.

Eric Dier
Astonishingly, Eric Dier is yet to play a minute for Tottenham this season. Finally, Dier’s time as an elite Premier League footballer may be over. While Harry Winks has started all three of Tottenham’s games (and will surely be recalled by England), even Oliver Skipp appears to have moved ahead of Dier in the midfield pecking order. After years of playing for Spurs almost by default, he is a man earmarked for Carabao Cup duty after the arrival of Tanguy Ndombele.

Southgate cannot justify retaining the discarded Dier in his squad, though his loyalty to Fabian Delph suggests that he may not do the decent thing and put a brake on an England career that should have ended the second he cleared out Sergio Ramos.

still dying laughing at how absolutely unnecessary this eric dier tackle was on sergio ramos. pic.twitter.com/wUfv9928g6

Jesse Lingard
No Premier League goals or assists in 2019 and yet he has still started all three of Manchester United’s Premier League games this season, which pretty much sums up the sorry state of Ole Gunnar Solskjaer’s squad. He was hooked after just 56 minutes on Saturday against Crystal Palace, though the manager insisted that he was not worried about his form. “We stick together and Jesse’s not scored any goals in the last three games, no, but he’s been a big part of our team and will continue being an important part. The energy he gives us is lively.”

And if you are looking to return to the Champions League, all you really need is lively energy.

Bruno Fernandes has got three assists for Sporting tonight. That’s more in one night than Lingard has got for us in over a year. One of them isn’t good enough to play for us though apparently.

For England, Southgate has other options in James Maddison (though he is said to have his doubts about his attitude) and Mason Mount. Though he has never not named Lingard when he is fit, so it would be a watershed moment if he dropped him just for being a bit sh*t.

Fabian Delph
Who are we kidding? Of course 74 minutes against Lincoln in the Carabao Cup will be enough to keep him in the England squad.