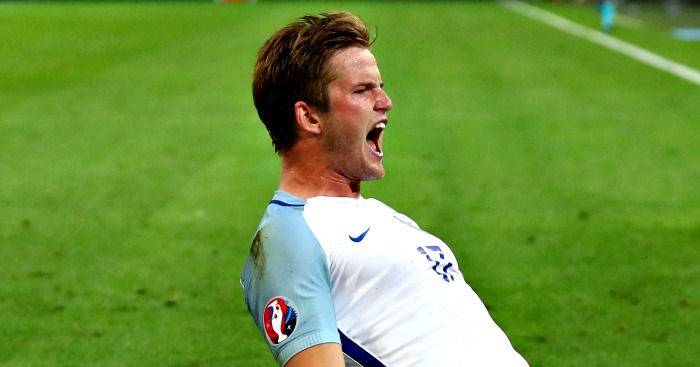 Eric Dier
Roy Hodgson has caused quite a commotion by making six changes to his England starting line-up, hasn’t he? Rather tellingly, few questioned the manager’s decision to bench any of the chosen sextet in particular, more the decision to make such drastic alterations on the whole. But imagine the national outcry if Eric Dier had been one of those Hodgson had rested.

Having served much of the 2014/15 season – his first in England after moving from Portugal – as a combination of right-back and centre-half for Tottenham, few will have considered Dier as the answer to his country’s midfield problem. The 22-year-old had experience as a defensive midfielder at Sporting Lisbon, but nothing to suggest he could become an integral cog in a Premier League-challenging machine, nor a regular for his national side in the year of a major tournament. Dier’s international debut only came in November.

In the mould of Nicky Butt in 2002 and Owen Hargreaves in 2006, the midfielder has been England’s best player thus far. Gary Cahill, Chris Smalling and Adam Lallana are the only other outfielders to start every game, but it is Dier whose absence would be most sorely felt.

Emanuele Giaccherini
Fans of any club are naturally inclined to support their own players at major international tournaments. (Non-Welsh) Liverpool fans will have incurred the wrath of those nearby by waving their arms in hilarious fashion when Daniel Sturridge scored for England. Supporters of West Ham prepared to pretend they had won their first trophy since the 1966 World Cup when Dimitri Payet scored either of his two goals. Arsenal fans will have nodded knowingly at each missed chance directed from the head of Olivier Giroud.

Who would be the hero for Sunderland? John O’Shea has performed ably in the heart of the Republic of Ireland defence, but, you know, he’s John O’Shea. Sebastian Larsson has provided part of the horribly inadequate back-up act to an equally disappointing Zlatan Ibrahimovic. It is safe to say the Black Cats have not been represented in the greatest of lights thus far.

But what of Giaccherini? The man signed by Paolo di Canio for £6.5m in summer 2013 spent this past season on loan at Serie A side Bologna, having failed to impress in the Premier League. His temporary side ended the campaign four points above the relegation zone, with the 31-year-old a solid but uninspiring figure. But he has started both of Italy’s games, scoring an excellent goal in the opener against Belgium, and has earned admiring glances from Chelsea. The Sunderland reject played only one European Championship qualifier – his country’s first – and did not feature for the Azzurri from September 2014 until March 2016. Now he is one of Antonio Conte’s trusted lieutenants.

In a tournament hardly lacking excellent goalkeepers, McGovern has somehow emerged as one of the stars. “The players gave him a round of applause when he came in the dressing-room,” said Northern Ireland manager Michael O’Neill of his performance against Germany. They lost 1-0, but it could – and should – have been considerably worse. McGovern thought otherwise.

Progression for the diminutive nation would not have been possible without the 31-year-old. He has made 15 saves in three games, the most of any keeper in the tournament, and boasts one clean sheet. For reference, Hugo Lloris has also played three games for France, has made one save, and has conceded only one goal fewer. Forget Will Grigg, McGovern’s on fire, and your offence, including Robert Lewandowski, Thomas Muller, Mario Gotze and Mesut Ozil, is quite rightly terrified.

Vedran Corluka
Beyond the questionable water polo headgear, his lasting (and unfair) reputation as a journeyman and the fact that he has been 30 for the duration of his career, there is a talent. Few would have expected Vedran Corluka to impress quite so much at Euro 2016, but the central defender has been Croatia’s rock.

Back in May, it emerged that Bayern Munich were attempting to sign the former Tottenham and Manchester City defender. Public reaction was, predictably, rather dismissive. Corluka was considered a firm but limited player, more back-up option than first-team regular. He was captain of a Lokomotiv Moscow side which laid claim to the seventh-best defensive record in the Russian Premier League – nothing remarkable. But Corluka has been one of the standout centre-halves in France. Alongside Jerome Boateng, Kamil Glik and Italy’s famed BBC, the form of ‘Charlie’ has been a delight.

Joe Ledley
On May 7, Joe Ledley fractured his leg. A week later, Crystal Palace manager Alan Pardew described the midfielder as being “50-50” in terms of making Wales’ squad for Euro 2016. That Ledley even had a chance of being chosen by Chris Coleman was remarkable.

The BBC ran an article on the midfielder, in which they stated: ‘Minor fractures can take up to six weeks to heal, though the recovery time for more severe fibula injuries can be about three months.’ Up to six weeks to heal, then there remains a question over match fitness. But Ledley defied belief to come on as a substitute in the opening victory over Slovakia. He has gone on to start – and impress – against England and Russia, just six weeks after breaking his bloody leg.

Bartosz Kapustka
Seven teenagers have featured at Euro 2016 thus far. One, Kingsley Coman, has since turned 20. Two, Marcus Rashford and Renato Sanches, have failed to start, making just one substitute appearance. Three, Emre Mor, Breel Embolo and Oleksandr Zinchenko, have started just one game. Some teenagers have shown signs of promise; some have not. But the seventh has certainly impressed.

Bartosz Kapustka could not find a space on our list of the top ten youngsters to watch at Euro 2016, but the Poland winger has been excellent, and his absence through suspension in the last 16 will come as a blow to his national team. His displays in starts against Northern Ireland and Ukraine, as well as a substitute cameo against world champions Germany, have led to interest from Juventus, according to reports. Cracovia face a battle to keep their burgeoning star.