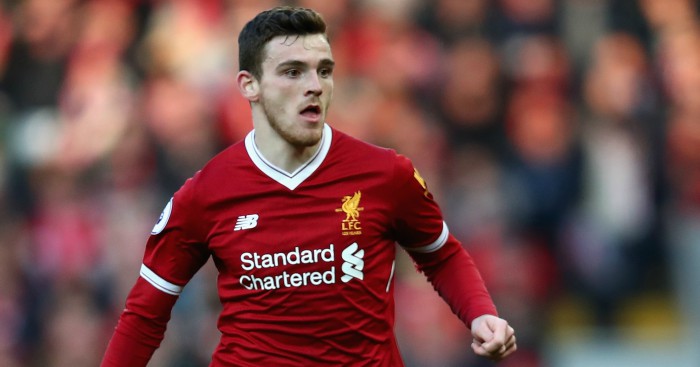 ANDREW ROBERTSON (Liverpool)
“He was a nice prospect, it was clear he was a big talent and offensively skilled. There were a few gaps to close in his defending things so it was not the most easy time maybe for Andy, for sure,” said Jurgen Klopp in January as he discussed the opening months of Andrew Robertson’s Liverpool career when he came, he saw, he played 90 minutes, and would then disappear again for a few weeks.

The situation was so bizarre that there were rumours that Robertson was already seeking a transfer in November, by the end of which he had played just twice in the Premier League. And all this while Alberto Moreno was doing his best Alberto Moreno.

An injury to the Spaniard opened the door but Robertson sprinted through; he has established himself as Liverpool’s first-choice left-back and excelled in his first Champions League appearance against Porto. Moreno is fit but Moreno is – quite rightly – very much exiled to the bench.

It was not until late November that Lingard started back-to-back Premier League games, and that followed a Brighton game which saw him drop out of the match-day squad altogether. Right now, he is on a run of 13 Premier League starts in 15 games and his omission from the XI that faced Chelsea on Sunday prompted a goal off the bench. He has gone from fringe to hinge in three months.

OUMAR NIASSE (Everton)
And no Everton player barring Wayne Rooney has scored more goals than Oumar Niasse’s eight. What is truly remarkable about that statistic is that 15 Everton players have played more minutes than Niasse this season, largely because his existence was not even acknowledged until late September.

“When Koeman arrived I was a real good target to destroy,” said Niasse of the Toffees’ old Dutch manager, who had left him without a locker in an attempt to drive him out of the club. By late September, things had got so desperate for Koeman that he turned to the big man, who duly scored twice off the bench against Bournemouth to claim a rare victory. “All credit must go to Oumar Niasse because he’s waited a long time for his chance,” said the Dutchman through clenched teeth.

Niasse has since lost his place under Sam Allardyce, regained it, lost it again when Everton spent £27m on Cenk Tosun and regained it once again when it became obvious that Cenk Tosun is no Oumar Niasse. He has started Everton’s last four games and God help the manager who tries to displace him.

LEWIS COOK (Bournemouth)
“A lot of players in his position would have been disappointed, or at times stopped learning, developing, because they don’t see a pathway for them to get into the team,” said Eddie Howe, who teasingly went on to say that the “sky’s the limit” for Lewis Cook, having not actually played him in the opening six games of the season.

Cook might well have pointed to the fact that the Cherries had only actually won one of those six games while he was twiddling his thumbs, but instead he worked hard and gave Howe little choice but to pick him. By mid-November he was being called up to the England squad ahead of Jack Wilshere and by mid-February he was being linked with Liverpool.

Cook has now started 12 of the Cherries’ last 14 Premier League games as they have pulled themselves up the table. Last month’s 4-1 defeat to Huddersfield was his (and Bournemouth’s) only loss of 2018. Maybe the sky is the limit, after all.

ADRIAN (West Ham United)
“If the situation remains as is, there’s a transfer window in December, and after that one, there’s one in the summer,” said Adrian in October, suitably distressed at losing his goalkeeper spot to Joe Hart only to see the bumbling Englishman let in ten goals in his first three games.

The grumbling Spaniard was restricted to Carabao Cup appearances but even an exceptional performance in a victory over Tottenham did nothing to change David Moyes’ mind; he was back on the bench three days later. Then his moment came with Hart’s ineligibility to face Manchester City and even Moyes could not – in good conscience – bring back his supposed No. 1.

“I’ll tell you this, he’ll play a lot of games for West Ham between now and the end of the season,” said the Scotsman when asked about Hart in mid-December. Thankfully for the Hammers’ Premier League prospects, he was only actually talking about the FA Cup.

MO DIAME (Newcastle United)
If you had told Newcastle fans in late November that they would chant the name of Mo Diame throughout February’s 1-1 draw with Crystal Palace they would have laughed in your stupid face. At that point, the midfielder had started just two Premier League games (both defeats); in fact, Diame did not start a victory since December 23.

Now Diame is ahead of both Jonjo Shelvey and Mikel Merino in the central midfield rankings, starting nine of their last ten Premier League games. They have lost just once – to the rather good Manchester City – in 2018.

“I have been working hard to get back to the player I was at West Ham, Wigan and Hull,” says the Senegalese. “It has been difficult since I have been here but I think I am in a good way.” Indeed you are, fella. A very good way indeed.