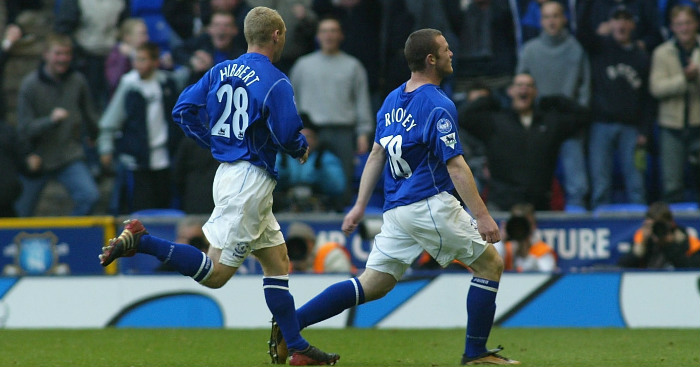 After Sean Longstaff sent his fellow Geordies into raptures with his first home goal for his hometown club last night, we take a look at six other local lads’ memorable first home goals…

Okay, so he was born in Cardiff, but Giggs moved to Salford when he was six, so we’re counting it. And what better way to score your first goal than bagging the only goal at home in the big derby game aged just 17?

That’s officially how Giggs got going, but as with many myths, it’s total bollocks. The ball clearly goes in off Manchester City defender Colin Hendry without Giggs getting so much as a touch.

His REAL first Old Trafford goal came five months later, as he got the opener in a 3-0 win over Norwich, incidentally. Yet that derby ‘goal’ remains credited to Giggs in the record books.

Okay, let’s try again with a proper Manchester United hometown boy, shall we?

Manchester United had lost the first leg of their Europa League last 32 game against Danish club FC Midtjylland, and needed to overturn that 2-1 deficit to avoid an embarrassing European exit.

Louis Van Gaal has only named 18-year-old youth prospect Rashford on the bench for the second leg, but he was pressed into unexpected action after Anthony Martial picked up a hamstring injury in the warm-up.

The young Mancunian didn’t balk at the opportunity, scoring two second-half goals in the space of 12 minutes that took the aggregate score from 2-3 to 4-3.

Then he did it again at home to Arsenal three days later, scoring twice to put United 2-0 up within 32 minutes in a 3-2 win. Yeah alright Marcus, no-one like a show-off.

The only player on this list who, like Longstaff, actually spent a reasonable amount of time out on loan as a youth. Consequently, despite having been at the Spurs academy since he was 11, Kane didn’t get his first goal at White Hart Lane – the ground he grew up just 15 minutes from – until he was 20.

That came in extra time in a League Cup game, with substitute Kane cancelling out Paul McShane’s goal for visitors Hull. That forced a penalty shootout, which Spurs won 8-7 with Kane scoring Tottenham’s fifth penalty.

It was right at the end of this season that he became a regular for Spurs, scoring in each of his first three league starts in April 2014, before breaking out the following season.

Isn’t it lovely when people live up to expectations?

Shearer cost his hometown club a world record transfer fee of £15m from Blackburn in the summer of 1996. Such a mind-blowingly enormous fee was justified: he had scored 130 goals in 171 games for the title-winning Rovers and hit 30+ league goals a season three times, two of which earned him the Premier League golden boot.

He was the perfect signing for a Newcastle side that had finished just four points behind Manchester United in the league the previous year. For reasons of consistency we will refrain from saying they bottled it.

So you can imagine the expectation placed on Shearer as he took to the pitch at St James’ Park for his hometown club for the first time, aged 26.

No worries though as Shearer’s wonderful 88th-minute free kick to the far top corner in 2-0 win over Wimbledon was the first of 206 he would score for the club, as he demonstrated again and again why the Magpies shouldn’t have made him play in goal when he went for a trial as a teenager. The vindictive bastard.

Robbie Fowler had played just three times for Liverpool before their League Cup second round, second leg clash with Fulham.

He had scored on his debut for the Reds in the first leg at Craven Cottage two weeks earlier and subsequently kept his place for Premier League games against Chelsea and Arsenal, but nobody was expecting too much out of the 17 year old until he raised the bar to a ludicrous new level in his fourth game.

Anfield didn’t only see Toxteth boy Fowler score his first Anfield goal that day. They also saw him score his second. And his third. And his fourth. And his fifth. No wonder Liverpool fans thought he was God.

Probably the one goal on this list that even neutrals can vividly remember, this was the future England captain’s announcement that yes, all the hype around this 16 year old was justified, thank you very much.

Remember that Arsenal were very, very good at this time. The Gunners had gone 30 league games without defeat, and took a 1-0 lead early on at Goodison Park through Freddie Ljungberg.

Tomasz Radzinski scored an equaliser midway through the first half, but the game seemed headed for a draw until Rooney – an 80th-minute substitute making just his 10th appearance – did this in the last minute.

15 years on, David Moyes would say in Faith of Our Families: Everton FC, an Oral History: “There’s only a couple of times when I’ve left Goodison, when you’re in the changing room at Goodison, down in the walls and you can hear the crowd a little bit going out.

“There’s probably only two or three occasions where it was rapturous down the whole street, everybody. That was one of the days, because of the result and the introduction of Wayne as well.

“He was one of their own – probably half of the supporters might have known Wayne from playing in the streets with him, or bumping into him, or going to school with him. I think when it’s like that and you know somebody who’s so good and has scored that goal, I think it really means an awful lot to people.”

This is what it’s all about, really, isn’t it?