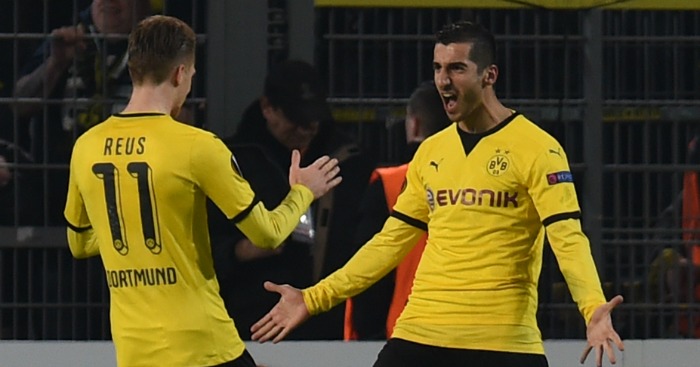 Given the appointment of Pep Guardiola at Manchester City and the fact Jurgen Klopp will have his first summer to mould the Liverpool squad to his liking, a raft of Bundesliga players being tipped to move to England comes as little surprise. Ilkay Gundogan , Loris Karius, Joel Matip and Granit Xhaka have already moved, while rumours about Pierre-Emerick Aubameyang are circling. WhoScored.com look at a handful of other Bundesliga stars tipped to trade Germany for England this summer:

Henrikh Mkhitaryan (Borussia Dortmund)
Seemingly alerting the entire continent to his potential availability after rejecting a new contract offer from Borussia Dortmund, Henrikh Mkhitaryan will likely be in the thinking of all of the top clubs in the Premier League. Arsenal and the two Manchester clubs have been credited with an interested, and it’s no shock given the Armenian’s performances last season.

Mkhitaryan was revitalised by Thomas Tuchel at Dortmund, ending the campaign as the top rated player in the Bundesliga according to WhoScored.com (7.90). The 27-year old was at the peak of his creative powers, registering a league high of 15 assists, while 11 goals was also his best tally in the famous yellow jersey. Ranking among the top ten players in the league for shots (2.6), key passes (2.7) and dribbles (2.6) per game, it’s little wonder the playmaker is in high demand this summer.

Leroy Sane (Schalke)
One of only seven players to rank higher than Mkhitaryan in terms of dribbles per game, with 2.8 enough to place fifth in the Bundesliga, 20-year old Leroy Sane plays with no fear. Indeed, when you consider that ten of the winger’s 33 league appearances last season came from the bench, the youngster rounded an opponent every 25.4 minutes, or 3.5 times per 90 minutes. Joachim Low was suitably impressed, and if Sane can show that sort of skill – albeit likely to come in glimpses this summer – his stock could soar after the Euros.

That would be bad news for Manchester City, who have been heavily linked with a move for the Schalke graduate as they aim to add quality where they have been lacking for some time on the flanks, as least as far as natural width is concerned. With eight goals and six assists last season, the 20-year old has the potential to reach the very top, with a league rating of 7.24 when excluding his aforementioned substitute appearances highlighting as much.

Ricardo Rodriguez (Wolfsburg)
It’s not the first time Ricardo Rodriguez has been linked with a move to England, though the timing of Arsenal’s apparent interest in the Wolfsburg man is perhaps a little odd after a relatively underwhelming campaign from the Swiss. He is another player whose price could be on the rise if he can impress in France this summer, so Arsene Wenger may be hoping that Switzerland struggle in Group A alongside the hosts if he is keen on making a move for the 23-year old.

While Rodriguez’s form dipped last season, aligned with a disappointing campaign for Woflsburg in the Bundesliga, he was still among Dieter Hecking’s top performers, with a modest rating of 7.10. Nevertheless his averages for interceptions, key passes and dribbles per game all dropped from the campaign previous, while a return of three assists was his lowest in four seasons. That said, the left-back still has the ability to create from wide positions and deliver expertly into the box, with no defender in Europe’s top five leagues creating more chances over the last three seasons (168).

Jonas Hector (Cologne)
On the subject of left-back’s aiming to impress in France this summer, we should see plenty of Jonas Hector given that he was the only one selected in Germany’s squad. With no recognised right-back in Low’s ranks either, the full-back positions are a concern for Die Mannschaft, though they should have faith in Hector’s ability to put in a strong showing, despite playing a chunk of the season with Cologne in central midfield.

Left-back is his natural position though, and that is why he has been linked with a move to Liverpool, with Klopp reportedly keen on replacing Alberto Moreno. Hector is certainly a more reliable alternative to the Spaniard and a strong all-round performer, where so many full-backs tend to specialise in defence or attack nowadays. When just considering the 23 appearances he made at left-back last season, the 26-year old averaged 2 tackles, 2.5 interceptions, 1.2 dribbles and 2.1 key passes per game for a rating of 7.42 in that position.

Mahmoud Dahoud (Gladbach)
Another apparent target of Liverpool, with Manchester United also credited with an interest earlier in the year, is Mahmoud Dahoud, who spent last season partnering new Arsenal man Xhaka in the Gladbach midfield. The 20-year old enjoyed a sensational breakthrough season at the club, scoring five goals and registering eight assists from 27 league starts for an overall rating of 7.13. That score rose to a superb 7.32 when excluding his five substitute appearances.

While Xhaka dictated the tempo of matches with his passing, Syrian born Dahoud would do so by breaking the lines to push the team forwards, making intelligent runs with and without the ball. The youngster didn’t just impress in the final third though, with averages of 2.2 tackles and 1.8 interceptions per game proving that he has what it takes to be a complete midfielder. If Liverpool don’t snap him up then someone else will before long.

Filip Kostic (Stuttgart)
Despite failing to prevent Stuttgart from being relegated last season, interest in Filip Kostic is believed to be high with reports that a release clause in his contract could be met this summer. Newly crowned Premier League champions Leicester are believed to be among the clubs considering a move for the Serbian international, which would certainly make sense if they were fearing any potential departure of PFA Player of the Year Riyad Mahrez.

The 23-year old winger would suit Leicester’s style of play given that he is very direct and fast on the counter, with a dismal pass accuracy last season unlikely to be a concern to Ranieri given the Foxes’ approach. Indeed, Kostic still earned a solid WhoScored.com rating of 7.20 having scored five goals and registered five assists, all of which came between the end of November and beginning of April. Moreover, averages of 2.3 dribbles and 2.6 key passes per game both ranked among the top ten in the Bundesliga, with Kostic certainly one of the best players to be relegated from Europe’s top 5 leagues last season.