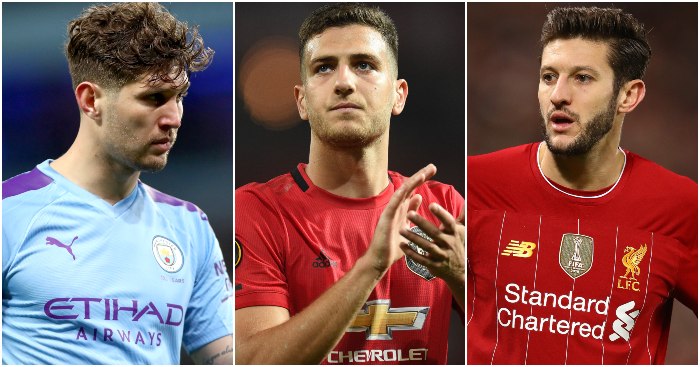 There was talk yesterday of the Gunners being interested in Stones and the England defender was said to be open to discussing a move to north London. Stones is approaching contract renewal time at Manchester City but the champions aren’t in a hurry to sit down and talk terms.

Mikel Arteta knows Stones as well as anyone and presumably the ex-City assistant has an understanding of Pep Guardiola’s reservations over the Barnsley-born centre-back. It was a wretched 2019 for Stones so perhaps a fresh start somewhere is just what he needs. Whether pairing up with David Luiz is to be advised, well, we won’t know unless they try. Please, please try.

One problem: City are already desperately short of centre-backs. So…

Nathan Ake to Manchester City
Well spotted. Bournemouth aren’t in the big six. But Chelsea are…

The Blues are said to have a buy-back option on Ake following the Holland defender’s move from Stamford Bridge to Bournemouth in 2017. The Cherries bought him for £20million but Chelsea can have him back for double that.

Frank Lampard could certainly do with a centre-back, especially if Andreas Christensen departs. But their need is arguably greater further forward. And attackers don’t come cheap.

So to raise a few extra quid, Chelsea can buy back Ake for £40million but have him delivered instead to City for a £10million profit. City get their much-needed left-sided centre-back, Chelsea have extra funds to reinvest in their attack and Bournemouth… well, they are probably going down.

Marcos Rojo to Chelsea
The Argentina defender is firmly out of the picture at Manchester United and were it not for Axel Tuanzebe twanging something in the warm-up against Liverpool, Rojo would be without a Premier League start this season. He needs to get away and United seem quite willing to facilitate that.

Whether it be a loan deal or a permanent move, Rojo could be more useful at Stamford Bridge. Providing he can stay fit and resist his two-footed urges…

The 29-year-old is primarily a centre-back but he can also play on the left, which would allow Chelsea to shift either Emerson or Marcos Alonso this month. There is said to be interest in both.

Tonight I came across what is perhaps the strangest stat in football.

Diogo Dalot to Tottenham
Rojo is not the only United defender out in the cold right now. Everyone at Old Trafford seems to have forgotten about the existence of Dalot entirely.

The Portuguese youngster has had injury problems since moving to Old Trafford from Porto in 2018 and United’s determination to sign Aaron Wan-Bissaka only a year later suggests Solskjaer is reluctant to rely on Dalot.

Jose Mourinho, though, was very excited when he brought the then-teenager to United. “In his age group, he is the best full-back in Europe,” explained Mourinho by way of an introduction.  “He has all the attributes that a full-back needs: physicality, tactical intelligence and technical quality, combined with a Porto Academy mentality.”

That sounds just like the kind of player Mourinho needs to fill a gaping void at right-back. The need for a centre-forward has become more dire in recent weeks but Spurs are still short of a right-back. The fact Dalot is equally happy playing as a wing-back would also appeal to Mourinho.

Harry Winks to Man Utd
Maybe Dalot could included in a part-exchange deal between United and Spurs since the Red Devils are understood to be keen on Winks?

That was the suggestion last week, admittedly before Ed Woodward decided to fill his time faffing with Sporting Lisbon over a deal for Bruno Fernandes. It was reported that Winks was a target for United this month and Manchester City in the summer.

Selling Winks might suit Spurs. The England midfielder doesn’t seem to have convinced Mourinho and the new Spurs manager would probably relish being forced to pick Eric Dier.

Any funds raised from Winks would allow Mourinho a little more wiggle room in the market as he looks for defenders and a couple of centre-forwards, since Daniel Levy warned him before taking over that there would not be huge sums to play with in the market.

Would Winks be a success at Old Trafford? We’re not sure. The midfielder is neat and tidy but can he be the driving force they need? It would be intriguing to put him alongside Scott McTominay or another ball-winning midfielder and see if he can pull United’s strings.

Adam Lallana to Tottenham
In addition to strikers, Mourinho also needs recruits who can feed those further forward. Especially if Christian Eriksen is on his way this month.

Lallana would be well suited to Spurs and since he is in the final six months of his contract, his price would appeal to Levy. The 31-year-old has spoken of his predicament at Liverpool –  “Obviously I want to be playing as much as possible” – and Spurs might be his best offer.

So what it seems we are saying is that Lallana should give up a Premier League title winner’s medal and the perks of free agency in the summer to aid Spurs in their battle for a European place, and Liverpool should sell him now, weakening a settled squad for the sake of a few quid.

Klopp "is resigned to losing Lallana for free this summer" according to The Guardian.