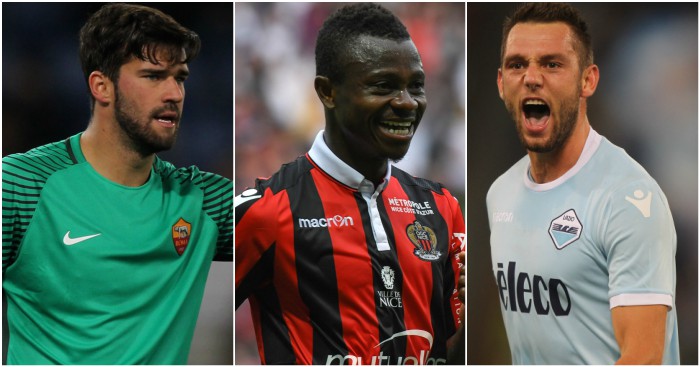 Alisson Becker
Loris Karius hasn’t chucked one in for a couple of games so there have been suggestions that Jurgen Klopp might stick with the German. But that would represent a huge gamble when it is painfully obvious that a solid, reliable goalkeeper would enhance Liverpool’s prospects instantly.

The man most heavily linked with the Reds is Roma stopper Alisson Becker. There was talk of interest in January and just last week, there were reports that a deal is being negotiated before the summer, when Liverpool are likely to face stiff competition for the 25-year-old.

Alisson is ‘the Messi of goalkeepers, the number one of number ones’, according to Italian goalkeeping guru Roberto Negrisolo, a former Roma and AC Milan coach. Comparing the Brazilian to Dino Zoff and Michel Preud’Homme, Negrisolo also scoffed at suggestions Alisson could go for €50million, insisting he is worth far more than that. So Liverpool are likely to have to pay a world-record fee if they want Alisson. A figure of €70million (£62m) has been quoted but the Reds should consider the bargain they got from Roma last summer. To think of it as Mo Salah and Alisson for around £100million sounds like very astute business.

Jean Michel Seri
The Nice midfielder was said to be devastated last summer when a £36million move to Barcelone fell through when PSG entered the bidding late on. “It’s crazy,” said the midfielder’s agent. “They just want to do it to f*ck Barça.”

Seri reportedly has a clause in his contract that means he can leave for a club outside of France for €40million and that, combined with the form that saw him win the Marc-Vivien Foé trophy for the best African player in France, has piqued the interest of both Manchester clubs.

United were said to be favourites with a January move considered, but with Jose Mourinho supposedly looking this summer for a replacement for Michael Carrick and a player who can provoke Paul Pogba into pulling his finger out, a midfielder is certainly a priority.

Seri, 26, is a creative force, with only Monaco’s Thomas Lemar providing more assists than the Ivorian last term, while only three players – Lionel Messi, Angel Di Maria and Alexis Sanchez – played more through balls. Comaprisons have been drawn with Xavi, so make of that what you will.

Fred
United and City were also said to be competing for Shakhtar Donetsk midfield enforcer Fred, but Pep Guardiola is understood to be firmly in front in the race for the Brazilain, who will be 25 by the time the summer come along.

Guardiola wants an alternative to Fernandinho, who has recently signed a new deal but with the City star turning 33 in May, the club are already making succession plans, especially with Yaya Toure heading for the exit at the end of the season.

City also signed Fernandinho from Shakhtar but Fred will cost more than the £34million they paid for his compatriot in 2013. Regardless, the Brazil international wants the move after getting a view of City close up in the Champions League this season.

“A friend gave me the news saying that City and Guardiola were interested in me,” he told Gazetta dello Sport. “At the exit of the locker room, he [Guardiola] stopped me and said we had a good game. But he did not ask me to play with him. However, I confess, I wait impatiently for his call to arrive now. I think I would grow a lot with him. England is the best league in the world and I’ve always dreamed of playing there.”

Malcom
A switch to the Premier League seemed highly likely at one point in January, and although Bordeaux kept hold of the winger through the last window, Gus Poyet knows it’s only a matter of time before Malcom makes the move.

“He is a special player who can win matches on his own,” Poyet told Marca recently. “He is often double-marked because his talent is that special, and in January we were nervous because we almost lost him to the Premier League. We must prepare for this because sooner or later he will leave.”

Malcom says he stayed on the condition that he would be allowed to leave this summer. “Yes, there was a promise that I will be negotiating in June,” he said. “I will choose the team, and Bordeaux will let me go.”

Arsenal and Tottenham were both heavily linked with the 20-year-old, but Spurs signed Lucas Moura and Arsene Wenger took Henrikh Mkhitaryan instead. The north London clubs are expected to go toe-to-toe again though, with the right winger likely to cost in the region of £45million.

Stefan De Vrij
The Holland defender is set to have his pick of clubs after Lazio finally admitted defeat this week over trying to tempt the centre-back into signing a new deal.

“We are withdrawing for reasons that we will explain later on,” said Lazio sporting director Igli Tare. “It was a choice made after many months of negotiations, but there is also a limit to how things went. He has been an exemplary professional… He gave a lot to the club, just as we gave a great deal to him, but our paths will divide in June. The only thing certain is that in the world there are no lack of players.”

De Vrij’s free-agent status makes him an attractive prospect to clubs across the continent, with Inter, Napoli and Juventus said to be interested if the 26-year-old fancies staying in Serie A.

In the Premier League, United, Liverpool and Chelsea are all said to be interested in De Vrij, who turned 26 a fortnight ago. You would expect Arsenal to be sniffing too, given their need for a centre-half.

Leon Bailey
All the talk this week around the Bayer Leverkusen winger has centered around his international allegiance, with England reportedly keen to persuade him to commit to the Three Lions by virtue of his grandparents’ English passports. There is some confusion over whether he satisfies the criteria to represent England, but regardless of who he represents on the international stage, Bailey is a man in demand at club level too.

All the usual suspects have been monitoring the 20-year-old, who has previously said it is his “dream” to play in the Premier League. Chelsea are reported to have backed up their interest with a firm inquiry to Leverkusen last month. The Blues were understood to be keen on Bailey when he left Genk for the Bundesliga in January 2017 for £13million, but when reportedly offered the chance to double their money a year later, Leverkusen declined, well aware that his value is likely to increase further still come the summer.

Bailey has scored 11 goals and contributed six assists in 17 starts and 16 substitute appearances since joining Leverkusen.