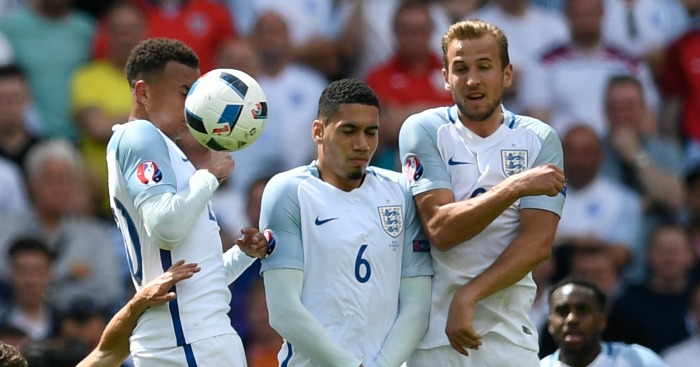 The days of writing down the names of Wayne Rooney and Joe Hart and filling in the rest are hopefully now over. These are the men that the new England manager – please let it be Laurent Blanc – should be building a team around…

Luke Shaw
England took four full-backs to France and not one of them is remotely special. Decent Premier League full-backs all four, but all are flawed, with both Danny Rose and Kyle Walker being exposed defensively in France. Luke Shaw is different. Luke Shaw is special. Luke Shaw could be England’s left-back for the next ten years. Roy Hodgson was so convinced by Shaw’s extraordinary talent that he was reluctant to rule him out of Euro 2016 even in March when he had not played in six months. Come September, Shaw will be fit and crucially untouched by a summer of abject failure.

Chris Smalling
Yes, he is flawed. Yes, he is partial to the odd brainfart. No, he is not 2016’s answer to John Terry, Rio Ferdinand, Ledley King, Sol Campbell, Jamie Carragher or possibly even Matthew Upson, but he is – worryingly – the best centre-half England can boast and he is – crucially – getting better. Working under Jose Mourinho will hopefully make him better still. Gary Cahill should now take on Phil Jagielka’s ‘phasing out’ role and Smalling should step up to become England’s senior defender alongside John Stones. There can surely be no new national manager who sees anything other than a Smalling/Stones partnership in England’s immediate future and few who would not now give him the captain’s armband.

John Stones
The caveat here is that Stones has had an awful season and his importance going forward does not mean that Hodgson made a mistake in picking Cahill over the new Rio Ferdinand/Bobby Moore/Per Kroldrup. In June 2016, that was the safe and sensible option, but in September 2016, Stones needs to be promoted and trusted with a view to a two-year campaign as part of England’s first-choice central defensive partnership. By then he will be managed by one of Ronald Koeman, Pep Guardiola or Mourinho (hopefully, from an England perspective, the latter) and we can assume that some degree of defensive coaching from somebody other than Roberto Martinez will iron out his flaws. Plus, there’s nobody else.

Dele Alli
There have been many in the media who have excused the poor performances of both Alli and Kane at Euro 2016 on the grounds that Hodgson did not play them in exactly the same roles as Mauricio Pochettino, but elite footballers need to be able to adapt; the suggestion that Kane cannot function without Alli as a No. 10 and Alli himself cannot function unless played purely as a No. 10 should be embarrassing for players who almost won the Premier League last season.

What we will offer in mitigation for Alli is his age (20), a ridiculous 3,224-minute club season at that tender age, and the underestimated effects of being not just title challengers but chasers for much of the season. Alli and Kane will have been both mentally and physically exhausted and that showed in the tired way Alli was attempting but ultimately failing to operate in tight spaces against Iceland. Go away, have a rest and then come back to a future where it doesn’t feel like Rooney’s presence will always push him elsewhere.

Harry Kane
We cannot dress this up – Kane was abject in France. He looked out of shape, out of sorts and out of his comfort zone. Hodgson’s decision to give him set-piece responsibility did not help, but there is only so much responsibility a manager can take for a player’s form entirely collapsing. Kane might tell you that he was not tired but he looked utterly exhausted in the closing minutes of England’s opener against Russia, and it’s little wonder: He had played over 4,000 minutes for Tottenham on the back of a summer with the England Under-21s and been involved in pretty much every senior England game betwixt and between.

It may yet transpire that Kane is not a natural international centre-forward (not everybody is – ask Ian Wright, Andy Cole, Robbie Fowler etc) but right now, 49 Premier League goals in two seasons has earned him the right to start next season as England’s first-choice striker. Hopefully, Pochettino will do us all a favour and buy another striker so Kane can occasionally have a ten-minute rest.

Marcus Rashford
He played 21 minutes at this tournament and beat five opposition players with the ball; Adam Lallana played 223 minutes and beat two. From ‘why the hell has Roy picked Rashford?’ (from some, not us) to ‘Why did Roy not pick Rashford sooner?’ in one short failure of a tournament. So poor was England’s performance against Iceland, Rashford merely had to move at something other than a tired trot to look 427 times better than any other England player. He may have fallen into the laps of Louis van Gaal and thus Hodgson, but the next manager needs to harness that enthusiasm and that energy before it is ground out of him by years of England underachievement.