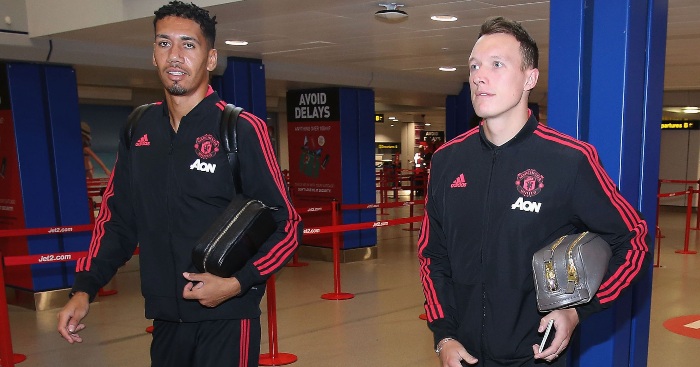 Chris Smalling and Phil Jones (Manchester United)
Ole Gunnar Solskjaer was never going to waste any time blooding his shiny new defence and the Manchester United manager will have been delighted with the early impact of Harry Maguire and Aaron Wan-Bissaka (who has ‘revolutionised’ the team already). Indeed, everyone at Old Trafford was basking in the Red Devils’ new-found resilience at the back. Except two former England defenders relegated to the comfort of their executive boxes.

Smalling and Jones were made to watch and learn as Maguire demonstrated why United spent £85million on their replacement. Victor Lindelof too continued his encouraging form from last season and the pair already look set for the long term. Smalling and Jones perhaps had already assumed that they will have to make do with the odd cameo but on a day that Solskjaer vowed to make a statement with his selection, the left-out duo could interpret that message as ‘off you f*ck, lads’.

Solskjaer said on Friday that "you will tell by the team selection" who he wants here this season. Telling that Tuanzebe makes the bench ahead of Smalling, Jones and Rojo.

Solskjaer did not offer even the consolation of a place on the bench, instead opting to go with Axel Tuanzebe, who the manager has referenced in glowing terms during pre-season. Of his seven centre-backs, the four missing from the match-day squad were the quartet most trusted by the previous regime.

United would happily have sold Smalling and Marcos Rojo last week had Everton stumped up enough cash for either, and Rojo in particular should be looking for a move before the end of the month. Maybe Smalling and Jones might benefit from a year in Europe too?

Dejan Lovren (Liverpool)
All of the fuss around Jurgen Klopp’s defensive selection for Liverpool’s opener against Norwich centred on the preference for Joe Gomez over Joel Matip as Virgil van Dijk’s partner. There is no doubt that this is the partnership for the future, but Matip’s form in pre-season left many feeling sympathetic towards the Cameroon international.

No one missed Lovren, though. Even an iffy performance from Liverpool’s normally rock-solid rearguard didn’t provoke any enquiries over the Croatian’s whereabouts. Which doesn’t seem to have escaped the 30-year-old.

Before kick-off, Roma were said to be sniffing and Klopp’s cold shoulder on Friday appears to have heightened Lovren’s desire to see what the Serie A side has to offer. Apparently, that’s not as much as Liverpool are currently paying him, but the former Southampton defender sees a wage cut as a fair trade for a regular game.

Lovren is said to be willing to talk to Liverpool to get them to lower their demands, but Klopp’s main concern may be over the prospect of doing battle on multiple fronts with only three senior centre-backs, two of whom don’t have stellar track records when it comes to fitness and availability.

Jan Vertonghen (Tottenham)
The Belgium defender had a front row seat alongside Ryan Sessegnon for Tottenham’s Premier League opener – not that he looked very happy about it. It would be weird if he did.

Jan Vertonghen hiding in the corner there, with the look of a man still feeling the effects of 11 pints and a forgotten number of gin and tonics the night before. But we know. We all know. pic.twitter.com/hW6LlqO9Uk

There does seem, though, to be something slightly strange around his omission for the Villa game. “I am going to play the players who I believe deserve to play,” Mauricio Pochettino told Sky Sports. “There is not any issue, only my decision was to play with Toby and Davinson. We have more than 25 players and everyone needs to understand we have plenty of good players in every position.”

Pochettino opted for Davinson Sanchez next to Alderweireld, with Eric Dier and Serge Aurier on the bench as defensive cover. That would be an easy decision to understand even if you disagree with the Spurs manager’s choice, but the backdrop of Vertonghen’s contract situation clouds the issue for the many supporters.

Vertonghen is in the final year of his contract at Spurs and it would be unlike Daniel Levy to allow an asset to leave for nothing next summer, especially when there are European clubs looking at the 32-year-old this month.

Unai Emery appears to have spelled out to Mustafi in no uncertain terms that he should look for a new club. There are many Arsenal fans who might relish the opportunity to be even more blunt, but Emery reinforced his message by leaving the German out of his squad for their opener at Newcastle.

Arsenal temporarily pausing the match to remove a foreign object, as if Shkodran Mustafi has no feelings.

Even with new signing David Luiz on the bench, Mustafi had to watch while Sokratis and Calum Chambers helped the Gunners keen a clean sheet, with Granit Xhaka and Matteo Guendouzi as their midfield screen.

Emery has his four centre-backs – Sokratis, Chambers, David Luiz and Rob Holding – but even before that quartet was set last week, the fact Mustafi’s agent hasn’t yet secured a return to Europe must be worrying the 27-year-old since the writing has been on the wall since the end of last season.

Tiemoue Bakayoko (Chelsea)
“Everybody has an opportunity. I have no pre-conceived ideas about anybody,” said Frank Lampard at the start of pre-season, ushering the likes of Bakayoko and Danny Drinkwater in from out of the cold.

Drinkwater and Bakayoko On, TV Off

A month’s worth of training and a couple of friendlies later, the £75million midfield duo were shown the door once more, with Lampard preferring to go with youth rather than either of Chelsea’s big-money signings. Drinkwater took the hint and disappeared to Burnley after making sure there will still be £100,000 deposited into his bank account every week, while Bakayoko’s search for a game continues.

The France midfielder must have been giddy to hear of reported interest from PSG but the Ligue 1 champions made the smart decision to go for Idrissa Gueye instead. Where does that leave Bakayoko now?

Probably hoping that Galatasaray’s interest amounts to something more concrete than PSG’s. Davide Zappacosta is in a similar boat but the right-back looks likely to make a return to Serie A before the end of the month.