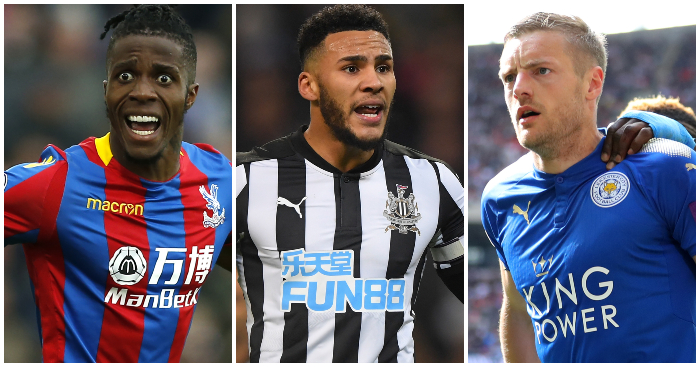 Jamaal Lascelles
Everton are the latest club to be linked with Lascelles, but the Newcastle skipper could be forgiven for thinking he could take a bigger step up the ladder if he is to leave St James’ Park.

And that’s a pretty big ‘if’ in Lascelles’ case. The centre-half has it good on Tyneside, where he has become one of the Toon Army’s most popular players, not just because of the performances that went a long way to helping the Magpies secure a top-half finish, but because of the leadership qualities the 24-year-old has displayed off the pitch.

But it is also fair to assume that Lascelles will be watching closely how Mike Ashley and Newcastle look to build upon their impressive tenth-place finish, which did not quite reflect the struggle Benitez’s men endured for much of the season. Lascelles has credited much of his development to Benitez so you would imagine that the captain’s future is strongly linked to that of the manager’s.

Lascelles, who doesn’t turn 25 until November, could likely handle the step up now, but he has time on his side. “This is the right club for me at the right time,” he said last month, amid links with Liverpool and Chelsea, while Marco Silva’s Toffees are said to be considering a £30million offer. If his development continues in similar fashion next season, then you can expect the big boys to register a much firmer interest, while Newcastle’s asset is only likely to increase in value.

James Tarkowski
As impressive as Lascelles was last season, he failed to convince Gareth Southgate that he could do a job for England this summer. The Three Lions boss was more impressed by Burnley stopper Tarkowski.

The 25-year-old was also reported to have caught Jurgen Klopp’s eye during a season in which Burnley barely felt the absence of Michael Keane, who moved to – and subsequently struggled at – Everton last summer. Before the start of the campaign, Tarkowski had made just four Premier League starts. By the end, the Clarets were in Europe and the former Oldham centre-half was desperately close to going to the World Cup after forming a robust partnership with Ben Mee.

It would be fascinating to see how either centre-back copes without the other by his side. Sean Dyche has drilled the duo into one of the Premier League’s most effective partnerships, with the Clarets defence having conceded at least eight goals fewer than anyone outside the top five, despite facing the second highest number of shots in the league. Burnley focus on restricting the quality of opposition chances more than the volume and they do that wonderfully as a unit. As Keane has discovered, it may not be quite as simple if you go it alone…

Wilfried Zaha
It seems all of the top five except Manchester United have been keeping a close eye on Zaha, who has already failed to make the grade with the Red Devils. However, the Crystal Palace winger is a vastly different, more complete player to the kid who signed for Sir Alex Ferguson but was greeted by David Moyes five years ago.

Nobody did more to drag Palace to safety and beyond last season, with Zaha netting nine goals in 29 appearances. He missed two chunks of the campaign through injury and the Eagles failed to win a game in his absence.

Liverpool and Man City’s interest appears to have drifted towards other targets, while the uncertainty at Chelsea hardly makes them an appealing prospect to any player with a range of options. That leaves Tottenham, who have retained a long-standing interest in the Ivory Coast international.

Zaha is understood to be perfectly content at Palace, where he looks set to earn another pay rise to make him the club’s highest-paid player – status that would be richly deserved. While the notion of the 25-year-old staying with his boyhood club warms the heart, the prospect of Zaha working under Mauricio Pochettino is simply too intriguing to ignore.

Jamie Vardy
Riyad Mahrez is the obvious Fox to be hunted this summer, and it seems likely Manchester City will snare their target, half a season after the Algeria star was denied his big move.

That makes the prospect of any the big dogs getting their teeth into Vardy extremely unlikely. The Leicester owners are reluctant to sell Mahrez, so the prospect of losing both star players is not one they are probably willing to consider.

Good for Leicester, but it is a shame that we might not see whether the 31-year-old could have made the step up as we all suspect he could. With 57 goals in three Premier League seasons and seven in 21 England appearances, Vardy has shown he can score goals and be a genuine nuisance upon whichever stage he is offered.

Arsenal wanted to give him a greater platform two years ago, while Vardy would be a brilliant addition to Klopp’s Liverpool squad. But the former non-league striker didn’t fancy the possibility of being back-up at the Emirates and, if he impresses at the World Cup, that desire to be the main man is unlikely to diminish.

Marko Arnautovic
It’s been a whirlwind few months for Arnautovic. After initially flopping hard following his move to West Ham last season, barely six months later the Austria attacker is being linked with a £50million switch to Manchester United.

“It’s nice to hear,” said the 29-year-old when questioned on the speculation, though it seems a fair number of United fans don’t agree. Selling Anthony Martial while recruiting Arnautovic would perhaps be Jose Mourinho’s finest act of piss-boiling.

The former Stoke star seems to fit the profile of a Mourinho forward but United fans would be entitled to ask for a bigger sample of his talents than the 20 games last season during which he scored 11 goals and contributed six assists to ease West Ham to safety.

Arnautovic may well strengthen United’s squad, and if there was a scenario where he could be recruited on the cheap, then perhaps Mourinho could convince the doubters that it is a deal worth doing. But at the price West Ham would demand, United would be daft to entertain the prospect, even if Arnautovic has demonstrated the talent to be an asset.

Alfie Mawson
A centre-back in Matt Stead’s ripe for the picking XI, Mawson is one of the very few assets Swansea could sell. Lukasz Fabianski is another but the Poland keeper is 33 with only a year left on his contract.

In contrast, Mawson would command a fee in excess of £20million but the 24-year-old has demonstrated that he is worth the investment. Unless we missed it, of the top six only Manchester City haven’t been loosely credited with an interest in the former Barnsley centre-half, though Tottenham are the strongest linked, however conveniently.

Mawson would fit the bill for Pochettino if Spurs are forced to replace Toby Alderweireld. The centre-back is accustomed to playing in three and four-man defences and, as is the demand on modern stoppers, Mawson is extremely comfortable and calm in possession.

It may be that he has another step to take before making the leap into the top six, but Mawson would be an intriguing option if any of the big boys want to offer him a shortcut.