Home Manchester United Six players who should be furious with Mourinho 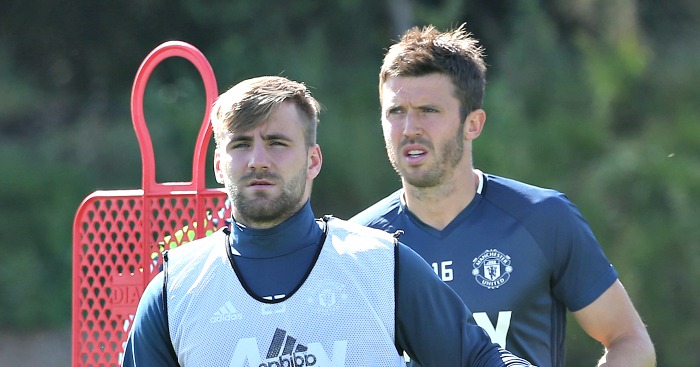 Luke Shaw
Jose Mourinho had more than enough ammunition to target any of his Manchester United players. Paul Pogba was ineffective against Watford, losing possession 18 times. Marouane Fellaini was at least partially at fault for each of the three goals United conceded. Eric Bailly and Chris Smalling were a collective disaster at centre-half. Wayne Rooney was an abysmal captain leading by example. Even Zlatan Ibrahimovic was culpable, having five shots but only testing Heurelho Gomes with one.

Yet it was Shaw who bore the brunt of Mourinho’s post-match ire. The manager was hardly scathing in his comments, complaining about the left-back’s positioning and lack of pressing, but why single him out? It was not Shaw who gave away a penalty; it was not Shaw who employs an infuriating technique of almost always relying on saving shots with his feet; the blame for the club’s chronic lack of creativity cannot be laid at the feet of the 21-year-old. And yet it was Shaw who was publicly chastised by a manager only four months into the job.

The reports on Tuesday morning were to be expected. Shaw is 21, and is still physically and mentally recovering from a horrific leg break last season. He is still developing. He is still learning. He and his teammates will inevitably be ‘furious‘; they will be ‘shocked’; they will be ‘stunned’. Keep it behind closed doors, Jose.

Henrikh Mkhitaryan
From one player needlessly scapegoated in public for an admittedly poor performance, and whose frustrations are merely compounded by injury, to another. For Mourinho’s treatment of Shaw after defeat to Watford, read his handling of summer signing Henrikh Mkhitaryan after 45 nightmare minutes against Manchester City.

“I’m clearly disappointed with the the first half,” Mourinho said after the 2-1 defeat earlier this month. “Disappointed with some really poor individual performances that affected the level of the team. We didn’t have a tactical problem, we had problems with poor performances.”

Mkhitaryan, and Jesse Lingard along with him, may not have been specifically named, but the insinuation was clear. The Armenian, who was a doubt ahead of the game after picking up an injury on international duty, was thrust into his first Premier League start against a daunting Manchester City side. This was baptism by fire, and Mourinho was the man lighting the touchpaper.

Reports have since emanated that the 27-year-old is growing ‘frustrated’ with his new manager over his playing position. He carved out a delightful niche of being pretty sodding brilliant for Borussia Dortmund on the right-hand side, but he now wishes to play as a No. 10. It is difficult to see when he will be afforded that chance.

Michael Carrick
“I am delighted that this incredible journey is continuing,” said Michael Carrick upon signing a contract extension with United in the summer. Since then, the club’s nominal vice-captain has been afforded a sum total of zero competitive minutes. If the journey is still ongoing, this is presumably the toilet break just ten minutes into the drive despite the fact you asked ten bloody times already whether they needed a wee but, oh no, they were fine then. This is why we never leave the house for fu…

It must be galling for Carrick that he, as it stands, has signed away at least a portion of one of his final years as a professional footballer. The 35-year-old will surely – surely – be handed his opportunity soon, but he has failed to even make the bench for three out of five Premier League games. Mourinho made eight changes to his starting line-up to face Feyenoord; Carrick was not one of them. He could be dominating midfields in the Championship with Newcastle, or playing week in, week out at a middling Premier League side, or perhaps even plying his trade abroad and enjoying the culture of a different country. Instead, he is consigned to a role on the bench at best, while playing golf during the week and hearing an increasingly irate Paul Scholes namedrop him at regular intervals.

Understand Mourinho giving Rooney enough rope to hang himself, but his faith in Fellaini over Herrera, Carrick & Schneiderlin is just weird.

Morgan Schneiderlin
When Morgan Schneiderlin last started more than one consecutive Premier League game, Tottenham were chasing down a five-point gap at the top of the table to leaders Leicester, Chelsea were flapping in tenth, and Norwich were 17th, one point clear of Sunderland. Manchester United were fifth, one point behind Arsenal in the race for Champions League qualification.

April 2016 was a fine month to be a Morgan Schneiderlin. The Frenchman started all four of United’s Premier League games as Louis van Gaal led a belated charge to finish in the top four. It was doomed to fail, of course, just as Schneiderlin appears to be doomed to a place on the United bench. Mourinho provided him an opportunity to impress in the Europa League against Feyenoord, and the 26-year-old was one of few players to do so in Holland, but, alas, he was not even named in the squad to face Watford.

There is truly little else Schneiderlin can do. As Mourinho persists with Marouane Fellaini in midfield, he continues to ignore the more mobile model of defensive midfielder. Van Gaal had the same tendency to overlook the former Southampton man. Examine United’s Premier League record with and without the midfielder since August 2015, then wonder why.

Matteo Darmian
Matteo Darmian, Timothy Fosu-Mensah. So ends the list of uninjured first-team players who have failed to make the matchday squad for any of Manchester United’s five Premier League games so far this season. Fosu-Mensah’s exclusion is understandable – he is 18, still developing, and is well behind in the pecking order.

For Matteo Darmian, it is unknown territory. The Italian started 24 league games last season – only seven players started more – yet he has fallen off the radar under Mourinho. To not even make the bench in a single league game is a particular slight; he is surely a better option than Ashley Young or Marcos Rojo at right or left-back? Perhaps Mourinho really f***ing hates people who can’t boil an egg themselves?

Mourinho had clearly made up his mind before his Manchester United squad returned from their summer excursions. Schweinsteiger was Van Gaal’s man, the symbol of a failed regime under a former manager. He was exiled from the side almost immediately, and made to train with the youth team. Mourinho has made no secret of the fact that he would rather holiday alone with Arsene Wenger for a fortnight than hand his German midfielder even a second of competitive action. And yet the 32-year-old still has no desire to leave Old Trafford.

He made 18 Premier League appearances last season, and started each of their six Champions League games. Take the hint, Schweini.