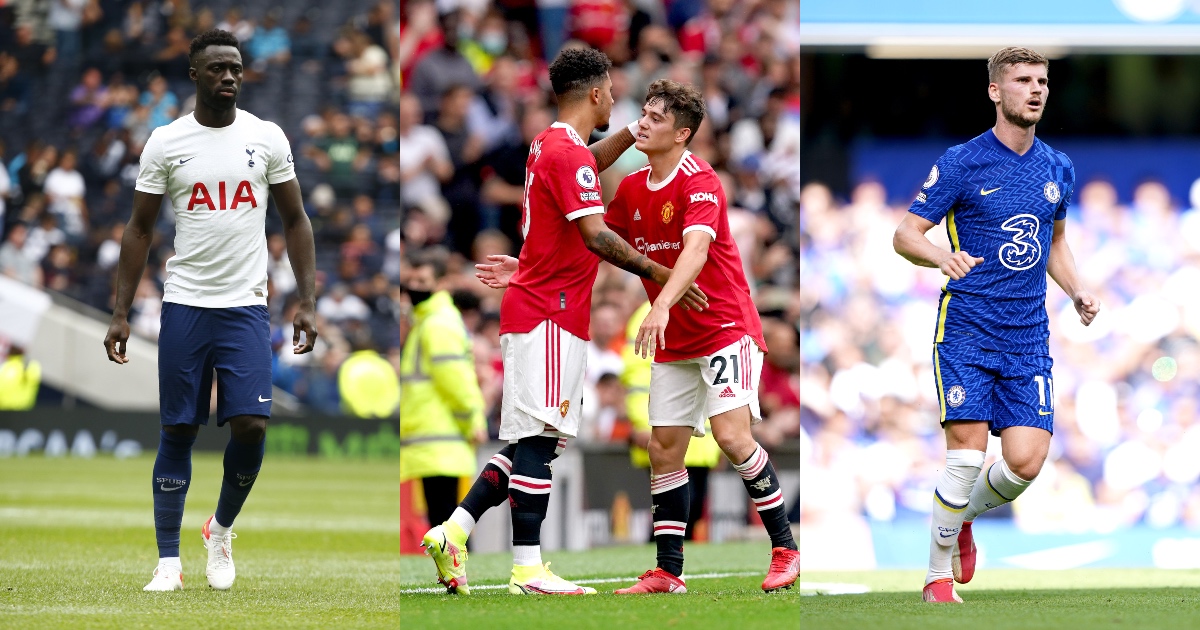 There were a number of shiny new signings sitting in the Premier League stands this weekend, watching these guys, who they are set to replace…

Victor Lindelof
It can’t be a great feeling to be so frequently discussed as a man that needs replacing in a football team (or a marriage). It got to a point – way before it was announced or even speculated that Raphael Varane would be joining Manchester United – where ‘a new partner for Harry Maguire’ had become a transfer news aside; so obvious it was hardly worth mentioning.

Lindelof didn’t have a great deal of defending to do against Leeds, but he did produce a stunning assist for Bruno Fernandes. He’s a Champions League-quality defender not quite good enough for a title-chasing team, and such a team doesn’t exist in the Premier League right now.

Timo Werner
“We have now with Romelu [Lukaku], the chance to play also with two strikers like they did in Inter with him,” Tuchel said, in music to Werner’s ears.

The German’s outstanding performances for RB Leipzig – which ultimately persuaded Chelsea to sign him – predominantly came in a little-and-large pairing with Yussuf Poulsen.

His speed and running off the ball gives him the advantage over Christian Pulisic, Kai Havertz, Mason Mount and Hakim Ziyech in a front two, but should Tuchel stick with three – as he is likely to do for the time being at least – the Chelsea manager may well go for the more technically astute options.

Davinson Sanchez
Fabio Paratici – the man we must now credit or slam over all Spurs transfer business – hasn’t signed a £45m-rated centre-back to sit on the bench.

There were audible groans from the Tottenham faithful as they realised Harry Kane wasn’t featuring on Sunday, which were presumably suppressed as they saw the pairing of Eric Dier and Sanchez in defence. They’re not ‘ones of their own’ per se, but at least they’re not doing the dirty.

And both Dier and Sanchez were excellent against Man City; it may have been one of Sanchez’s best ever displays for Spurs – he dealt with the manifold threats brilliantly.

It leaves Nuno Espirito Santo with a tough call. Cristian Romero will be in the starting line-up at some point, but he may now have to wait his turn. Alternatively, Sanchez will do a madness against Wolves on Sunday.

Anwar El Ghazi
The word on the street (the F365 office) is that Dean Smith will play Danny Ings up top, with Ollie Watkins as one of three forwards just behind the former Southampton man.

Emi Buendia is bound to play in the middle, leaving a space on one of the wings – presumably the right with Watkins cutting in from the left.

A few of us speculated about whether £28million Leon Bailey will indeed become one of the forward herd with Bertrand Traore and El Ghazi, but he will surely at least be given an opportunity to head that pecking order. The latter made our worst XI of the opening weekend.

Daniel James
James was the untouched side dish in a Manchester United feast on Saturday. He was ‘the other guy’ in a front four featuring infinitely more memorable displays from genuine gamechangers Mason Greenwood, Bruno Fernandes and Paul Pogba.

Not contributing a goal or an assist in a 5-1 drubbing isn’t a great look, but then that trio are – simply put – at a level James could never hope to reach. That said, Fred scoring the fifth must have been a tad galling…

The Welshman wasn’t (and isn’t) bad, but United have moved on to a point where he’s the definitive squad player. He’s ‘useful’ – a word synonymous with a lack of any real game time or great importance in football circles. It’s a term that would never be used to describe Jadon Sancho, for example.

Isaac Hayden
Joe Willock’s unveiling didn’t prove to be the same harbinger of positivity at St James’ Park as Varane’s at Old Trafford.

The former Arsenal man was given a warm welcome on Sunday having become something of a fan favourite on loan last season, scoring crucial goals to steer Newcastle away from the relegation zone.

He’s certainly an exciting prospect compared to the man he looks likely to replace in Steve Bruce’s line-up. Hayden was injured through much of Willock’s time with the Toon last season and Bruce may well continue to covet his workmanlike displays alongside the forward thrust of the new signing, but this team tends to fare better without him.