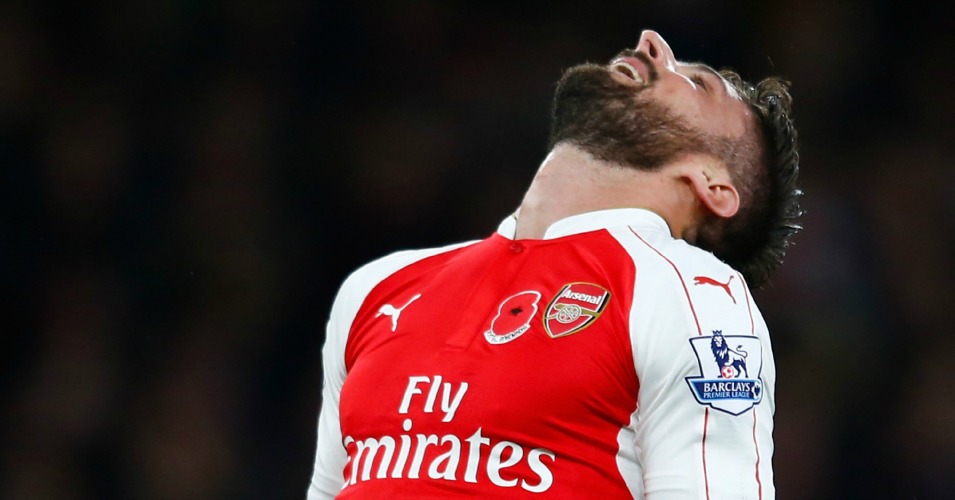 Jesse Lingard – If you want a perfect illustration of Manchester United’s stuttering mediocrity, look at a list of the footballers who have played the most minutes for the Reds this season; only nine players are above the willing but achingly average Jesse Lingard. In any other United squad, he would be Kieran Richardson or Jonathan Greening, but in 2015/16, he is at least a Nani.

It was never meant to be this way – Lingard did not even make the match-day squad for the first eight Premier League games of the season. But then Louis van Gaal lost patience with the infuriating Memphis Depay at a time when he had no Ashley Young or Antonio Valencia, and settled on the lost Lingard. After his first 45 minutes against Everton, Van Gaal praised his safety-first passing and his defensive work, and you sensed that the die was cast. Over 24 hours of football as an attacking midfielder for a top-six side later and Lingard has notched one assist.

Olivier Giroud – While the other three teams in the Premier League’s top four have strikers who have sailed past the 20-goal mark, Arsenal’s Olivier Giroud scored his 12th of the season on January 13 and has not even vaguely looking like adding to that meagre total since. So that’s 15 full games, 872 minutes and 37 shots since Giroud last scored a Premier League goal and yet the lack of any viable, fully fit alternative means that he still starts. Against Norwich on Saturday he was woeful until the knockdown for Danny Welbeck’s goal.

“I’m pleased to be back, not on the scoresheet but on the assist sheet,” said Giroud to the sound of a slow hand clap. Sorry Olivier, but that really should not be enough to make you anything better than second-choice striker for any side with aspirations to win the title. Mesut Ozil – creating chance after wasted chance – would undoubtedly agree.

Alberto Moreno – “The left-back has to come out of the team, this is not a one-off today in terms of the goal,” said Jamie Carragher after the Spaniard’s abject performance in the Capital One Cup final. Moreno did indeed ‘come out of the team’, with Nathaniel Clyne switching flanks, but Jon Flanagan is a) being eased back into action and b) not registered for Europa League duty, while Brad Smith is nowhere close to good enough, so Moreno is still the least bad available option at left-back.

“I don’t know where Alberto was in this moment,” said Jurgen Klopp after Moreno’s latest cock-up against Villarreal on Thursday. “If you are a left back, defend,” said Mark Lawrenson on BBC Radio 5 Live. It will be astonishing if Moreno is in place to make the same kind of mistakes as a Liverpool left-back next season.

Aleksandar Kolarov – Given a 2/10 for his ‘efforts’ at the weekend against Southampton by the Manchester Evening News, the Serb appears to be giving the grand total of zero f***s as Manchester City’s bizarre season draws to a close. One of City’s gang of four 30-plus full-backs, Kolarov has been spectacularly bad in recent weeks, with Sunday’s pasting by Southampton the nadir. Presumably he is not expecting to be Pep Guardiola’s first-choice left-back next season.

Kolarov should never play another minute for city, he shouldn't even be allowed in the stadium after this pic.twitter.com/4Db95PiKct

With Gael Clichy clearly Manuel Pellegrini’s chosen Champions League full-back for his appetite for actually being a full-back, Kolarov is not exactly relishing his status as City’s Premier League wide man. That only three outfield City players – Fernandinho, Nicolas Otamendi and Yaya Toure – have played more league minutes this season reveals rather a lot about a) City’s injury problems and b) the massive re-building task facing Guardiola this summer.

John Obi Mikel – After just two starts in Chelsea’s first 16 Premier League games of the season under Jose Mourinho, the Nigerian was one of the few players not implicated in the champions’ implosion. A pre-existing relationship with Guus Hiddink and the core strength of ‘not being Nemanja Matic’ meant that Mikel was perfectly placed to step into the Chelsea side and be the reliable if limited Mikel that was no longer good enough for Mourinho’s title-chasers but plenty good enough for a side that needed to be dragged up from 16th place.

Will Antonio Conte want Mikel at the heart of his midfield next season? Perhaps not, but you cannot begrudge the man his half-season back in the sun at Stamford Bridge after ten years of devoted service. And he doesn’t look too shabby as an auxiliary centre-half, either.

Danny Simpson – Tony Incenzo has outed himself as the journalist who voted for perhaps the least spectacular of Leicester’s regular starting XI as Footballer of the Year, declaring him an ‘unsung hero’. That’s not really the point of the award, Tony. There’s no doubt that Simpson was in the right place at the right time at Leicester, having started the season behind Ritchie de Laet in the pecking order. He was the club’s only other right-back at a time when Claudio Ranieri was casting around for basically any other right-back following a 5-2 defeat to Arsenal that exposed his gung-ho defence.

Simpson has – barring a red card in the return fixture against Arsenal – simply done everything asked of him by Ranieri, which means barely moving from a space about ten yards to the right of Wes Morgan. In 28 matches, Simpson has created just six chances and found a teammate with five crosses. In a similar number of games, Kyle Walker’s numbers are 28 and 12, which perfectly illustrates the difference between being a full-back for Leicester and a full-back for Tottenham. As only one of that pair has a nomination for Footballer of the Year, you have to say that Simpson is ideally suited to his particular job.